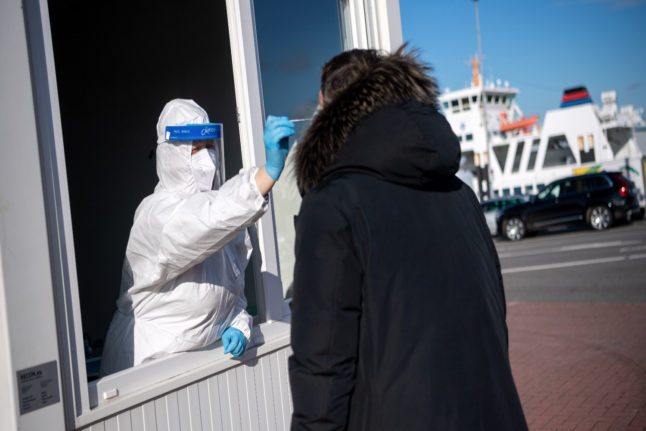 A woman receives a coronavirus test at a testing centre in Norddeich, Lower Saxony. Photo: DPA

The variant has now reached 88 percent of all reported cases, the RKI said on Wednesday evening, citing laboratory tests conducted last week between March 22nd and 28th. That’s up from three-quarters of new cases of March 18th.

The spread of the variant is worrying, the RKI said in its latest situation report, because “according to current knowledge, it is significantly more contagious and probably causes more severe courses of disease than other variants”.

Further increases in Covid-19 cases in hospitals are therefore to be expected, reported the RKI.

Exactly a week ago, the RKI had recorded 22,657 new infections and 228 new deaths within one day.

According to the institute, the number of new infections reported within seven days per 100,000 inhabitants nationwide was 134.2 on Thursday morning – slightly above the level of the previous day (132.3).

Can vaccines protect against the variant?

On Thursday, however, Germany’s BioNTech/Pfizer also said their Covid-19 vaccine was highly effective against the South African variant B.1.351 in the latest phase of ongoing clinical trials.

The increase in new infections overall and that caused by the highly contagious variant B 1.1.7. will lead to a “significant increase” in the number of Covid-19 patients seen in clinics, according to the RKI.

According to RKI findings, the rising number of reported new coronavirus infections is not attributable to an increasing number of rapid tests being rolled out.

Between March 8th and 14th, when weekly free rapid tests were introduced in Germany, 4.4 percent of laboratory-confirmed PCR tests were positive, according to RKI data. These were often taken following a positive test result from a rapid test.

The RKI has logged a total of 2,833,173 confirmed coronavirus infections in Germany since the pandemic began. The actual total number is likely to be significantly higher, as many infections are not detected.

It has also recorded a total of 76,589 deaths from or with the virus.