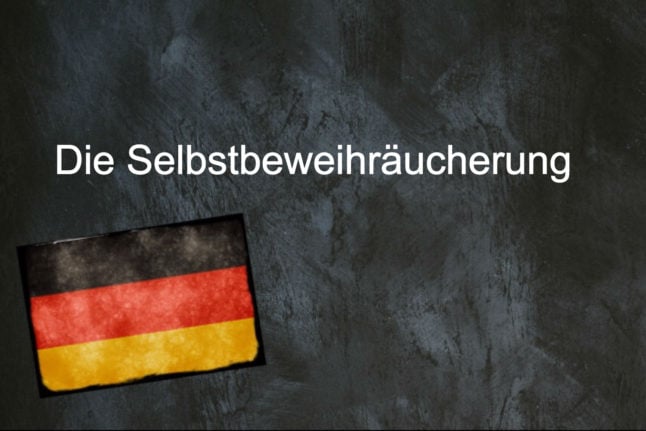 Selbstbeweihräucherung is a journey of a word. Contracted from “Weihrauch” (incense, think: priests swinging their censers) and “Selbst” (the self), the nominalised verb creates the image of someone shrouding themselves in smoke and the smell of Myrrh.

So what does this strange image mean?

In Germany, praise can be rare. Self-praise, meanwhile, is considered by many Germans to be a full blown faux pas. Selbstbeweihräucherung is a metaphor for inappropriate or excessive self-congratulation.

The image of self-incensing is a vivid, but a strange one, and its origins are just as mysterious.

Weihrauch hearkens back to the old high German “wīhrouch” from 750 – 1000 AD. In Germany, it was used by many different civilisations, from the medicinal or symbolic smokes of Germanic tribes, to Roman smoke-offerings, a practice later adapted (somewhat reluctantly) by the Orthodox Christian and Catholic Church.

In Catholicism, the rising incense smoke is used as a symbol for the prayer – the praise – of the Christian people rising up to God. So, the connection to “praise” is clear – but there’s another reason incense lends itself as a metaphor to self-congratulation.

There is a saying in German that “Eigenlob stinkt” (self-congratulation stinks). It turns out there is in fact a long history of associating self-praise with smell: the phrase appears for the first time in written form in a book of sayings from 1541. Even before this, in 1494, satirist Sebastian Brant wrote in the poem “Narrenschiff” (Ship of Fools):

So, it’s possible Selbstbeweihräucherung actually refers to the sometimes overwhelming, even smothering effect of incense.

If this is the effect it has on German nerves, it’s probably something best avoided – in your CV and dinner parties alike.

Seine Rede war eine regelrechte Selbstbeweihräucherung.
His speech was a down-right adulation of the self.

Das müssen wir umschreiben, das klingt nach Selbstbeweihräucherung.
We have to re-write that, it sounds like self-praise.

Ihre Bewerbung war gut, aber es gab ein Bisschen zu viel Selbstbeweihräucherung.
Her application was good, but there was a little too much self-congratulation in it.