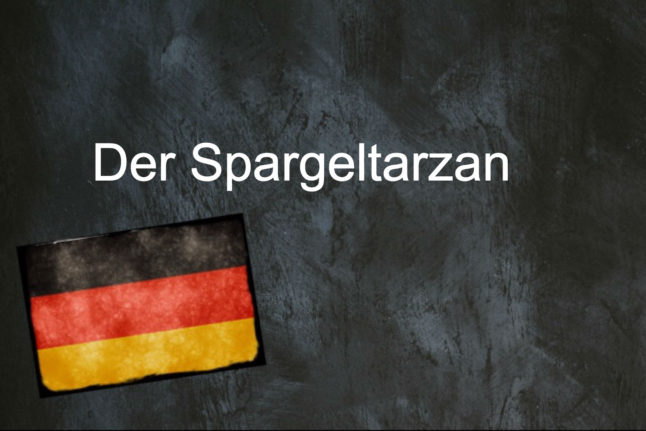 Rather than imagining an actual asparagus swinging through the jungle and mimicking animal noises, picture an inordinately tall but skinny man: that’s him, the asparagus Tarzan. Equivalent to the English ‘beanpole’ or ‘hatrack’, Spargeltarzan is an affectionate but disparaging slang word to describe someone (usually male) who is gangly.

The word has a funny and unexpected history. Invented in the mid 20th century, the word was pulled into the limelight by the German newspaper Bild in the 1970s, after they nicknamed up-and-coming footballer Hans “Hannes” Bongartz “Spargeltarzan” for his unusually skinny frame for an athlete.

It’s an apt description in some ways, as “Spargeltarzan” comes with an innate contradiction in meaning. Asparagus – tall, thin, and in Germany, predominantly pale – implies an appearance very different to the traditionally athletic and stocky depictions of E. R. Burrough’s Tarzan.

Perhaps this is why it stuck so well for Hannes. In an interview with 11 Freunde last year, Bongartz reminisces about the start of his enduring nickname:

“I was a weedy little thing and didn’t conform to the ideal of a brawny pro-footballer at all.”

Bongartz went on to defy all expectations and prejudices against his lanky appearance. In the mid-seventies he was considered one of the best midfielders in Germany, played for FC Schalke in the national league and was even a part of the national team for a while.

Disproving the stereotype that lankiness equals weakness, Bongartz became a true Spargeltarzan role model. Because of Bongartz’ popularity, the nickname came to represent a good-natured nickname towards people with lanky frames.

That said, body image and size can be a trigger for anyone, which is worth considering when using this word.

Bongartz is referred to by the media as “Spargeltarzan” to this day.

My boyfriend is very tall and thin, a proper beanpole.