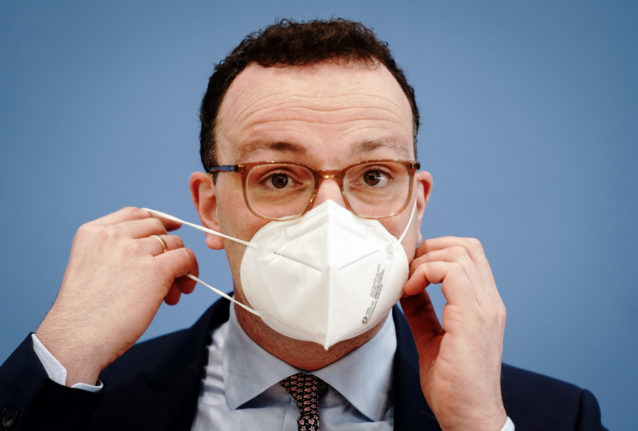 Spahn putting on his face mask before speaking in Berlin on Friday. Photo: DPA

At the moment, the numbers are rising too fast, and the more contagious virus variants make the situation particularly dangerous, the Christian Democratic (CDU) politician said Friday in Berlin.

“If this continues unchecked, we run the risk that our health system will reach its breaking point in the course of April,” he said.

READ ALSO: Covid-19 third wave: Which countries in Europe have the tightest restrictions?

Things won’t yet be back to normal by Easter, Spahn said, as the “infection figures are too high for that. Germany has probably reached the last part of this pandemic marathon. The goal is in sight, but there is still a long way to go.”

Current rules allow for gatherings of up to two households, or five people excluding children under the age of 14. The measure also applies over the Easter holidays stretching from Friday April 2nd to Monday April 5th.

The Health Minister also called on people to take advantage of free testing opportunities. In the meantime, he said, an almost nationwide network of more than 10,000 testing stations has been set up in the states and municipalities.

All German residents are entitled to at least one free rapid test per week by a trained personnel. The goal, Spahn said, is to make tests available at least twice a week in schools and Kitas (daycare centre), as well as at workplaces and in companies.

The head of the Robert Koch Institute (RKI), Lothar Wieler, said at the joint press conference with Spahn that it was conceivable that there would be 100,000 new infections per day if the third wave was not contained. Currently, there are about 21,500 new infections daily.

“We can’t stop the wave, but we can flatten it,” he added.

Tough contact reduction measures are the only way to stem the spread of the virus, Wieler said. Nationwide, the seven-day incidence continued to rise to 119.1, the RKI announced Friday.

Vaccinations on the rise

Meanwhile, slightly more than 10 percent of people in Germany have been vaccinated against the virus at least once. The second dose has already been given to 4.4 percent of people, according to RKI figures released on Friday morning.

However, Spahn said, “the effect of vaccination is reduced by rising infection figures.”

According to the minister, there will be 15 million vaccine doses available for Germany in April, as many as in the entire first quarter of the year. For the first time, GPs will also be able to offer vaccines.

Spahn, referring to the vaccination centres spread across Germany’s 16 states, called for all available vaccines to also be used.

He said that “creative solutions” are also needed to stop unused vaccines from going to waste, such as stand-by lists. This would allow leftover vaccines to be injected on weekend appointments at the end of the week, he said.