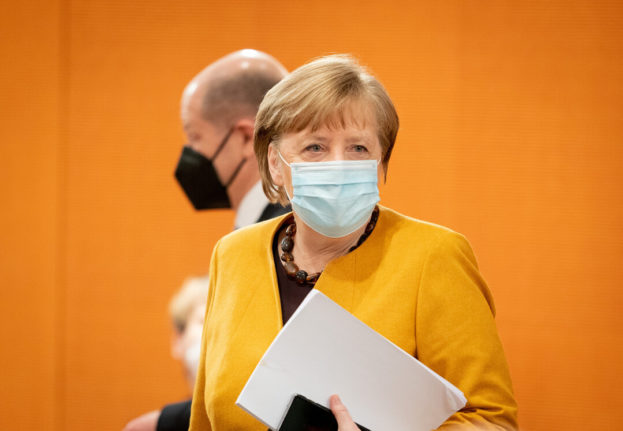 At a hastily arranged meeting with state leaders Angela Merkel announced she was dropping the Easter lockdown, which foresaw the closure of all businesses for five days, reports claim.

The German Press Agency (DPA) learned of the decision from participants at the meeting but the U-turn has not been officially confirmed.

“I take full responsibility for this misjudgement,” Merkel reportedly told the state leaders, according to Bild newspaper. “In my long experience I’ve learned that if you try to knock your head through a wall, the wall wins.”

The Chancellor is set to give a press conference at 12.30pm on Wednesday.

She will then take questions in the Bundestag at on Wednesday afternoon, an appointment at which she is likely to face tough questions from MPs on her initial decision and the subsequent U-turn.

While her own CDU party expressed anger at the plan to bring public life to a halt over Easter, the opposition Greens described the plan as “too little too late.”

“I have personal respect for the Chancellor’s statement. In the end, it is better to clear up now if it is not legally possible,” Bavarian leader Markus Söder said after Merkel’s decision became known.

According to participants, CDU leader Armin Laschet, who is state leader in North Rhine-Westphalia, all state leaders bore responsibility as they all agreed to the plan..

After facing a wave of criticism over several aspects of the lockdown agreement from Monday evening, Angela Merkel agreed to meet the state leaders again on Wednesday for a second round of talks.

Criticism of the agreement, which would send the country into a strict lockdown over Easter, has come from opposition politicians, representatives of the church, employer organisations, and even Merkel’s own interior minister.

The meeting started at 11am on Wednesday, according to reports in several German media outlets.

Up for discussion were topics such as whether Maundy Thursday day will be a public holiday, what exactly the phrase “ban on gatherings’ means, and whether church services will be completely banned.

The first two points have been the subject of confusion due to the vague wording of Tuesday’s text.

The ban on church services on the holiest holiday of the Christian calendar had been criticised by church leaders and interior minister Horst Seehofer.

The toughened shutdown had prompted fierce criticism, with the Bild daily calling the government’s pandemic management a “mess”.

“Merkel and the (regional leaders) have lost sight of the real problem,” it said.

Der Spiegel called the measures a “scandal”, claiming the government had “completely the wrong priorities” and should instead focus on improving its vaccination campaign and test strategy.

Infection numbers continue to rise in Germany, with 15,813 new cases reported in 24 hours on Wednesday by the Robert Koch Institute (RKI) health agency.

As well as ordering the Easter shutdown, Merkel and the regional leaders agreed on Monday night to extend existing virus measures including keeping cultural, leisure and sporting facilities shut through to April 18th.

“The situation is serious. Case numbers are rising exponentially and intensive care beds are filling up again,” Merkel said after announcing the measures.

But patience is running thin in the country over a sluggish vaccine rollout, a delayed start to mass rapid testing and higher infection numbers despite months of shutdowns, with support for Merkel’s Christian Democratic Union party at its lowest level for a year.

Europe’s top economy will elect a new government in September, as Merkel is retiring after 16 years in power.