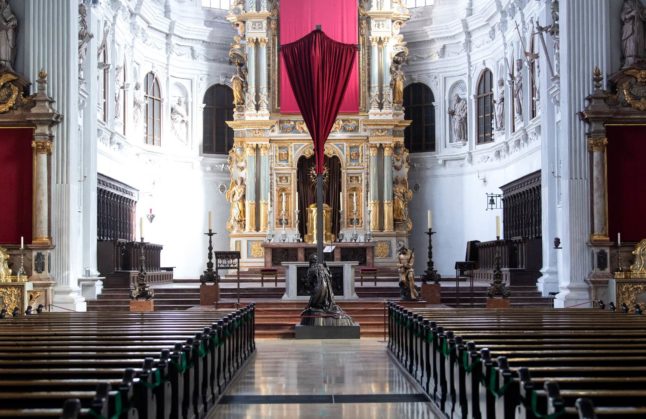 The inside of a church in Munich on Wednesday. Photo: DPA

Following marathon talks on new coronavirus measures, religious communities were asked to hold gatherings over the Easter weekend from April 1st to 5th only virtually to protect against the spread of the coronavirus.

“It has already amazed me that parties with the C (for Christian) in their name, of all things, are suggesting that churches refrain from holding services, even more so at Easter,” Seehofer told Bild newspaper on Wednesday.

“The Ministry of the Interior worked out hygiene plans together with the churches very early in the pandemic, and they still work flawlessly today.”

Chancellor Angela Merkel of the Christian Democrats (CDU) and the state premiers had agreed early Tuesday morning that there would be additional restrictions over Easter to break the third coronavirus wave.

READ ALSO: What you need to know about Germany’s ‘hard lockdown’ measures over Easter

Public, private and economic life is to be largely paused from ‘Maundy Thursday’ to Easter Monday. Religious communities have been asked to hold meetings only virtually.

However, the Catholic and Protestant churches have already made it clear that they do not want to automatically forego attendance at services.

On Tuesday, talks were already underway at the working level between the churches and the federal government.

In the talks, the government should have made clear that opening church doors at Easter is different to opening stores, president of the Central Committee of German Catholics (ZdK), Thomas Sternberg, told the Redaktionsnetzwerk Deutschland on Wednesday.

“This is not recklessness, but possible to do responsibly while maintaining strict rules.”

Some states leaders have hinted that they will not implement the rule, despite having agreed to it on Monday evening.

Lower Saxony’s state premier Stephan Weil of the centre-left Social Democrats (SPD) told public broadcaster ZDF that “We do know that this is a special area. That’s why we want to talk first before we decide.”

Saxony’s Prime Minister Michael Kretschmer made it clear that his state will not ban churches from holding in person services.

He said he had no doubt “that the churches, the religious communities, will find a wise and responsible way.”

Merkel and state leaders called for emergency follow-up talks on Wednesday in order to address confusion and dissatisfaction over the current rules, among them whether or not church services would be allowed to talk place over the Easter holidays.