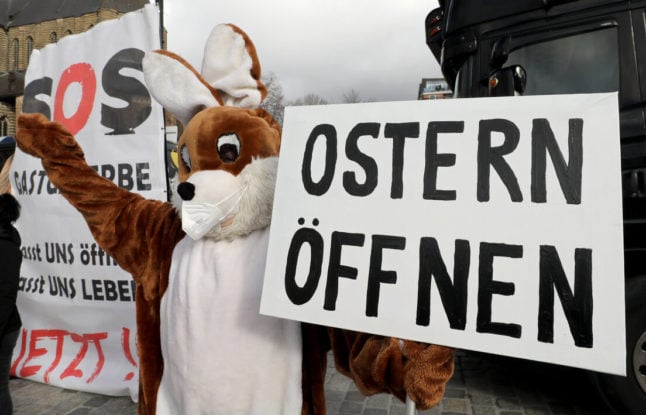 On Monday evening the government and states decided to impose Germany’s toughest lockdown yet over the five days of Easter, while also bringing curfews into play for areas with high infection rates.

After a day of rumours that contact restrictions could be lifted over the religious holiday, as happened at Christmas time, the announcement came as a shock.

Also included in the new lockdown rules are a night time curfew in hotspots and pledge to increase testing. Here’s what scientists, doctors, politicians, and care home representatives thought of the agreement.

“In my opinion, this could have a very positive effect because a whole series of days will basically be Sundays,” Brockmann said on Deutschlandfunk radio on Tuesday morning.

“Of course these measures will have a positive impact, but how strong is very, very difficult to calculate,” he added.

Given that Germany is currently is a state of exponential growth of cases, there could be up to 60,000 new infections every day in Germany without tough restrictions, he said.

Figures released by the RKI on Tuesday show 7,485 new infections, about 2,000 more than a week ago. The nationwide 7-day incidence of new infections per 100,000 inhabitants went up slightly to 108.1.

Asked about the night-time curfew, Brockmann said that “anything that reduces contacts is helpful.”

“Politicians have recognised that we are in a difficult phase of the pandemic and that we must not jeopardise the success of the vaccination rollout,” the president of the Association for Intensive Care and Emergency Medicine (Divi), Gernot Marx, said.

The decisions were tough but important, he said. “This is the only way we can slow down the current exponential growth of incidences again – and also the only way we will see fewer patients in intensive care units in a few weeks.”

Stating that the current occupancy of intensive care beds is the same as at the peak of the first wave, he said that “that already worries us a lot, despite all our experience after one year of the pandemic as intensive care specialists.”

Marx said though that the government needed to offer people a strategy for a return to normality by the summer.

“People who are prepared as a family not to meet over Easter because they know they can meet in the garden in June will help to avoid very serious courses in intensive care units. And that’s all we want,” he said.

Political response: ‘Too little, too late’

Green party health expert Janosch Dahmen called the new rules “too little, too late,” saying “the third wave should be broken now, but instead the shutdown will not come until Easter.”

He added that there was still no clear starting point for providing self-tests in schools, while tests and masks in the workplace were still not compulsory. “In the time between now and Easter, many more people will catch the disease.”

He said that the states had allowed the third wave to grow in momentum by loosening the restrictions without imposing a testing strategy.

Christian Lindner, leader of the liberal Free Democrats (FDP), said the measures were “too harsh” and “not innovative enough.”

“It shows a staggering lack of strategy that the principle of “we’ll stay at home” is still the central response to the pandemic, even after more than a year,” Lindner told broadcaster WDR5 on Tuesday.

Lindner cited the city of Tübingen, among others, as an example of “very creative concepts”.

READ MORE: Why one German town is lifting its lockdown despite third coronavirus wave

Within the framework of a model project for more opening steps in Corona times, free tests have been available at several stations in the university town for a good week.

With a negative result, one can, for example, go to shops or to the hairdresser. In terms of organisation, the model has worked so far, Tübingen’s mayor Boris Palmer (Greens) said on Monday. However, it is still too early to assess the effect on the number of infections.

The German Foundation for Patient Protection has demanded more chances for social contact are provided for people in nursing homes than what was decided by the federal and state governments.

“Merely holding out the prospect of extended visitation opportunities is sheer mockery of those affected,” Eugen Brysch, director of the German Foundation for Patient Protection, told the Deutsche Presse-Agentur on Tuesday.

At the lockdown summit, the federal and state governments decided that the facilities would be allowed to expand their visitation options and to offer group programmes inside residential areas. The prerequisite is that there is no coronavirus outbreak in the home and that the residents had their vaccination at least two weeks prior.

Brysch welcomed the fact that 90 percent of nursing home residents are now vaccinated. “But for residents, practically nothing has changed in many cases,” he said. “Unregulated visits at Easter are fiction for most.”

Many continue to live with strict visiting and contact restrictions, he said. “For people in institutions, vaccinations have not brought freedom.”

‘A scandal’: What the media thought

Der Spiegel news magazine called the government’s repeated focus on tweaking shutdowns a “scandal”, claiming it had “completely the wrong priorities” and should instead focus on improving its vaccination campaign and test strategy.

“This three-week lockdown rhythm confirms the suspicion that the federal government and states are simply trying to play a catch up game they have already lost,” the conservative daily Frankfurter Allgemeine Zeitung said, referring to Germany’s continued extension of shutdown measures since the beginning of November 2020.