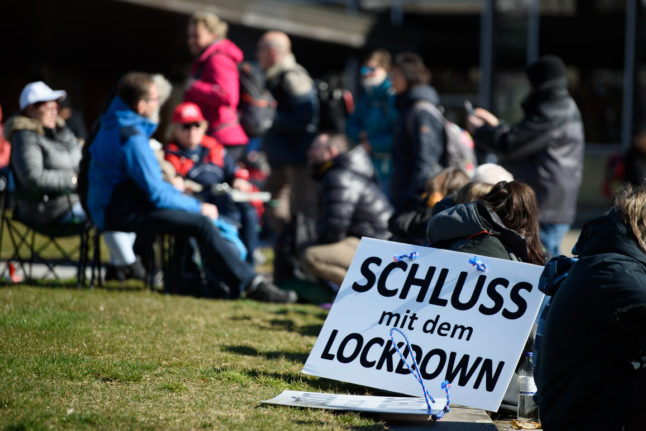 The restrictions would be prolonged until a yet-to-be-determined date in April due to the high rate of infections at present, which are being
“accelerated by Covid-19 variants”, the document said.

The memo is set to serve as the basis of a meeting between Merkel and regional leaders on Monday.

The document stipulates that contacts inside buildings “must be avoided where possible because of the increased risk of infection”.

While many workers in businesses can work from home, for those who have to got to their workplace “at least two rapid (Covid) tests a week” should be indispensable, it says.

The plan also moots the possibility for regions “opening individual spaces to the public”, but requiring negative Covid tests and contact tracing for users.

Cross-border travel should be limited to the strict minimum and combined with quarantine requirements and a negative test before any return to Germany.

Germany’s districts are obliged to go back into a hard lockdown if coronavirus cases rise above a 7-day incidence of 100. But, as ever more regions break through this barrier, disgruntlement over the strategy is growing.

The head of the Association of German Cities, Burkhard Jung, told the German government on Sunday that it should drop it’s instance on local governments going back into lockdown based on the 7-day incidence of cases.

“We should introduce a new Covid indicator in Germany that also takes into account the vaccination rate, the burden on intensive care units, and case mortality,” said Jung, who is also mayor of Leipzig, told the Funke Mediengruppe.

According to the current lockdown agreement, a region that has a 7-day incidence of over 100 cases per 100,000 inhabitants on three consecutive days needs to ‘pull the emergency brake’ and go back into a hard lockdown whereby schools and businesses are closed.

“I am worried that the current policy of the federal and state governments is losing support among city mayors,” Jung warned.

The Leipzig mayor’s criticism came a day ahead of the next round of lockdown talks, set to be held on Monday.

As Germany enters a third wave of the pandemic, the Robert Koch Institute (RKI) announced on Sunday that the nationwide 7-day incidence had now broken through the 100 barrier and stood at 103.9. A nationwide incidence of over 100 is only of symbolic importance and does not mandate a new national lockdown.

Despite rising case numbers, many regions have been unwilling to go back into lockdown.

While Hamburg, Nuremberg and Regensburg have committed to reversing the easing of restrictions, several smaller districts across the country have rebelled against the ’emergency brake’ clause.

Ahead of the next round of lockdown talks on Monday, there is also growing disagreement among state leaders on how strictly the 7-day incidence should be used as the marker for future measures.

Bavarian leader Markus Söder demanded that the emergency brake be applied equally and consistently throughout Germany. “Otherwise it will be a toothless tiger and its effectiveness will fizzle out,” he told the Frankfurter Allgemeine newspaper on Sunday.

Söder rejected any further easing of restrictions. “Those who take the wrong steps now risk turning the third wave into a permanent wave,” he warned.

But other state premiers say that some easing of restrictions should happen before Easter.

“With regard to the Easter break, holidays could be possible for children within Saxony-Anhalt’s borders, for example in the Harz mountains,” Reiner Haseloff, state leader in Saxony-Anhalt, told Welt am Sonntag newspaper.

Rhineland-Palatinate’s leader Malu Dreyer (SPD) said that conditions must be created “so that people can go hiking and stop at a beer garden in our state during the upcoming Easter holidays instead of flying to Majorca and partying there.”