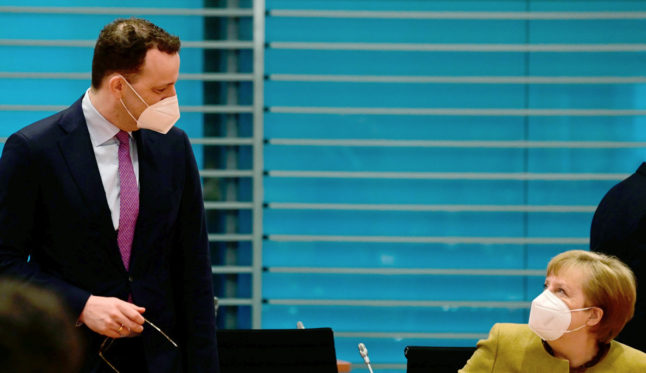 The conservatives are now polling at just 29 percent nationally, their lowest level of support for a year and below the 32.9 percent they secured in the 2017 elections, according to a survey published by the ARD broadcaster.

Tobias Zech, a member of the Bundestag for the CSU Bavarian sister party of Merkel’s CDU, on Thursday became the latest in a string of MPs to resign over corruption allegations.

Zech had carried out paid PR work for a political party in Macedonia shortly after he was elected to the Bundestag in 2016, according to Der Spiegel weekly.

He had declared the activities but felt that “from today’s point of view, I would evaluate (them) differently and would no longer carry them out”, according to the Münchner Merkur, quoting a letter Zech wrote to fellow party members.

The revelation is the latest in a scandal that has embroiled the CDU-CSU alliance after two of its lawmakers were accused of profiting directly or indirectly from coronavirus mask contracts.

CSU lawmaker Georg Nüßlein was last month placed under investigation for corruption following accusations that he accepted around €600,000 to lobby for a mask supplier.

A similar controversy embroiled CDU lawmaker Nikolas Löbel, whose company allegedly pocketed €250,000 in commissions for acting as an intermediary in mask contracts.

Löbel gave up his mandate, while Nüßlein has left the CDU/CSU parliamentary group.

On Wednesday, investigators probing the scandal searched the offices belonging to Alfred Sauter, a member of the CSU executive committee and former Bavarian justice minister.

The so-called mask affair erupted in the run-up to two key regional elections in the states of Baden-Württemberg and Rhineland-Palatinate this month, with the conservatives scoring their worst ever results in both states.

The scandal compounded voter frustration over a sluggish vaccine rollout, a delayed start to mass rapid testing and higher infection numbers despite months of shutdowns.

CDU chief Armin Laschet admitted the party “must improve” its coronavirus management as it looks to gain ground ahead of a general election of September 26th.

With the conservatives moving to clean up their ranks, MPs have since also come forward over conflicts of interest beyond the “mask affair”.

Mark Hauptmann, a CDU lawmaker from the eastern German state of Thuringia, gave up his mandate over accusations that he had received payments from foreign governments such as Azerbaijan to lobby for them.