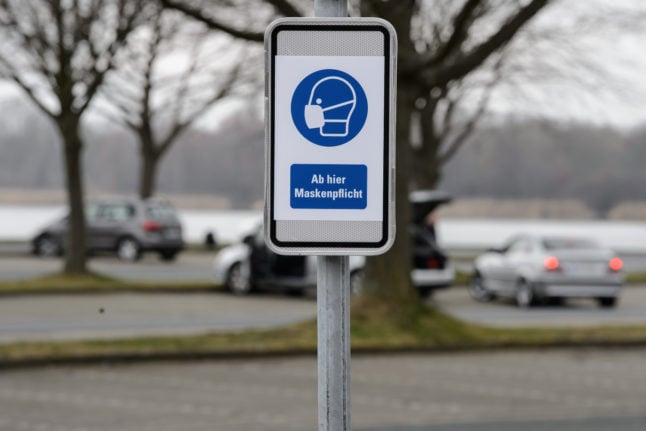 The city of 'Salzgitter' in Lower Saxony has applied the emergency brakes following a Covid-19 7-day incidence rate of more than 200.

The vice president of the Robert Koch Institute (RKI) for infectious diseases, Lars Schaade, told reporters that highly contagious virus variants were getting the upper hand, wiping out progress seen last month in containing the pandemic.

“It is very possible that we will have a similar situation over Easter to the one we had before Christmas, with very high case numbers, many severe cases and deaths, and hospitals that are overwhelmed”.

The RKI on Friday reported 17,482 new infections in the previous 24 hours and 226 deaths in Germany, with the seven-day incidence rate soaring to 96 per 100,000 people despite a months-long shutdown of large swathes of public life.

The country’s second city of Hamburg said it would pull the “emergency brake” from Saturday after exceeding the 100-mark three days in a row. Brandenburg, the state surrounding Berlin, also crossed the benchmark on Friday.

“We are in the third wave of the pandemic, the numbers are rising, the percentage of virus mutations is high,” Health Minister Jens Spahn told the news conference.

Spahn, who this week faced growing calls to resign amid frustration with the government’s pandemic management, called on Germans to refrain from spring break travel to help curb infections.

The grim news came as Germany resumed administering AstraZeneca’s Covid-19 jabs after the European regulator EMA assessed it was “safe and effective” to use.

Amid a widely criticised sluggish vaccination campaign, Germany decided on Monday, along with most EU governments, to suspend use of the vaccine for the EMA to examine a handful of cases of cerebral vein thrombosis that emerged.

Doctors will now have to inform patients about the possible blood clotting risk before giving them the jabs.

Critics had complained that the decision to halt use of AstraZeneca’s vaccine over the last days only served to fuel mistrust over the jabs and further delay Germany’s inoculation programme.

By Thursday, only 3.8 percent of the German population was reported fully immunised.

Spahn said the resumption of the AstraZeneca vaccinations combined with expected new arrivals of jabs from other manufacturers in April should speed up the German campaign.

But he admitted that “an honest analysis of the situation shows that there aren’t enough vaccines in Europe to stop the third wave with vaccination alone”.

He said it would take several weeks before even those in the highest risk groups were fully inoculated and warned that the country should brace for an extension of current restrictions.

German Chancellor Angela Merkel will meet with the country’s 16 state leaders on Monday to set new shutdown rules based on the latest pandemic developments.

Karl Lauterbach, a public health expert from the Social Democrats, junior partners in the government, said there was for now no alternative to keeping restaurants, most shops and entertainment venues closed.

“You can look at it any way you want, we have to go back to lockdown,” he said, calling for “short, sharp” restrictions.

“The sooner we react, the shorter the lockdown will need to be.”