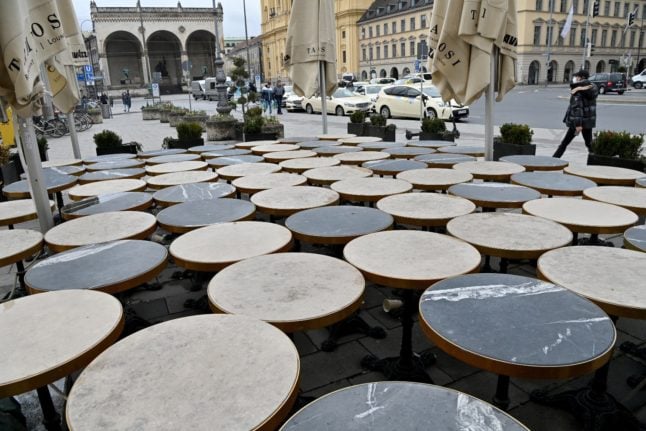 Tables at a closed restaurant in the centre of Munich on Tuesday. Photo: DPA

According to a report by Business Insider, the federal government and states are considering suspending a planned next step for reopening public life – which was set to go into effect on March 22nd.

According to the agreed-upon plan, restaurants could open for outdoor dining, and there could also be re-openings of opera houses, concert halls and cinemas with a 7-day incidence of up to 50 new coronavirus cases per 100,000 residents.

Non-contact sports – which were not clearly defined in the plan – indoors and outdoors could also be possible again.

READ ALSO: EXPLAINED: This is Germany’s five-step plan to head out of lockdown

With an incidence rate between 50 and 100, these relaxations would also be allowed if customers or guests present a negative rapid Covid-19 test or make an appointment beforehand.

However, the worsening infection situation and the uncertainty surrounding the AstraZeneca vaccine has caused the Chancellery and state representatives to rethink the move.

Instead, the lockdown, which has so far been extended until March 28th, is likely to be extended again, possibly for another four weeks, reported Business Insider.

The number of new coronavirus cases in Germany have been slowly but noticeably rising over the past month. The average 7-day incidence per 100,000 inhabitants rose last month from 60.1 (on February 18th) to 85.6 as of Wednesday.

There are also fears over virus variants. According to the Robert Koch Institute (RKI), the significantly more contagious viral mutation “B.1.1.7 represents the most frequent SARS-CoV-2 variant detected in Germany”.

What steps have already been taken?

At the last federal-state meeting on March 3rd, Merkel and state leaders decided on a five-step plan to begin reopening public life.

The first steps have already been implemented, from the opening of hair salons at the beginning of March, to opening flower and home appliance stores with strict distancing measures, and even retail in some states through an appointment system.

Berlin on Wednesday became the first German state to say it would pause opening public life in light of rising numbers in the capital and fears over virus variants.

Will all states keep to the emergency brake agreed with Merkel?

Merkel and the state leaders also agreed on a step-by-step lifting of restrictions at the March 3rd meeting. But built into this process was a so-called Notbremse – an emergency brake which local and regional governments could pull if the 7-day incidence were to rise above 100.

According to the Notbremse, if there is an incidence of more than 100 new cases per 100,000 residents for more than three days, the previous opening measures will be withdrawn. Currently, 124 districts around the country are already exceeding the 100 incidence mark.

However, it is uncertain whether all states will adhere to the Notbremse. Berlin’s neighbouring state of Brandenburg, for example, doubled its incidence value to 200 only a few days after the March 3rd summit.

Yet government spokesman Stefan Seibert remained firm that the federal-state decision must be implemented, “not only in its pleasant passages, but also in its difficult ones”, he said in Berlin on Monday.

“Rising incidences, rising case numbers, especially in the younger population, no more decline in the occupancy of intensive care beds – these are unpleasant developments to which we must all react together.”

What will be the other deciding factors in extending lockdown?

The states and federal governments are also likely to base their decisions on next opening steps on the availability of vaccines, and how comprehensively they can be rolled out.

The vaccination summit of the federal government and the states, which was initially planned for Wednesday, has been cancelled and may be held on Thursday or Friday, as soon as the European Medicines Agency (EMA) gives its opinion regarding the AstraZeneca vaccine.

READ ALSO: What you need to know about Germany’s suspension of the AstraZeneca vaccine

Until now, the EMA had said that 30 cases of brain thrombosis in five million vaccinated people across Europe corresponded to the proportion of the total European population – meaning that there was no above-average risk.

However, several European countries – including Germany on Monday – suspended the use of the inoculation until further findings emerge. Now the Bundesrepublik will decide whether to continue using the vaccine or whether to work out a contingency plan, including for those who have already received their first jab.

It’s also up in the air if school and Kita openings will continue as planned for March. Different states are working on different approaches, including averting closures through regular testing, regardless of the infection situation.

READ ALSO: Are all German schools really going to open again before Easter?