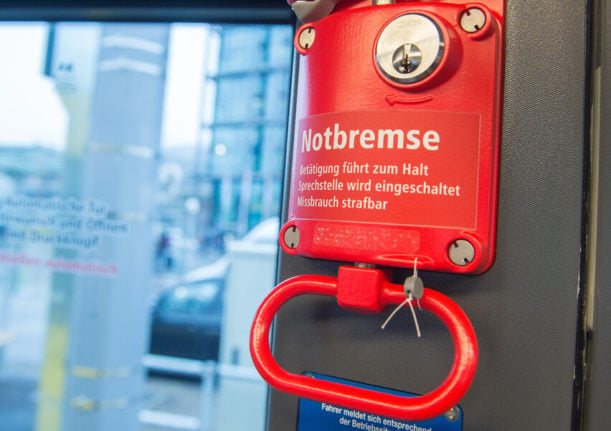 The Notbremse has been given a new meaning. Photo: DPA

Never a country known for a love of small talk, meaningless chatter in Germany has been reduced even further over the past months – meaning it hasn’t been the best time to practise your German skills.

But if you have had one conversation, it is likely to have been about the pandemic.

Here is the vocabulary you need to be able to keep up with when talk inevitably turns to the virus.

Aerosole (aerosols) – The tiny particles produced when you cough, sneeze or speak. Because the virus is transmitted via these little particles that circulate in the air, health experts recommend that you regularly open the windows to ensure that fresh air circulates through the room.

Abstandsregeln (distancing rules) – The rules on social distancing have meant that German speakers have had to start using the term Abstandregel to describe keeping distance in various contexts.

Bund-Länder-Runde – This is the informal meeting of the federal government with state leaders at which new lockdown measures are agreed upon. It happens every couple of weeks and is controversial among opposition politicians due to the fact that it is not an official constitutional body.

Dritte-Welle (third wave) – The plotted curve of viral infections resembles a wave. The rise begins gently but become ever steeper. The first wave occurred in spring, the second came in autumn. The Robert Koch Institute says the country is already in a third wave.

Einkaufswagenpflicht (shopping trolley obligation) – Many supermarkets have decided to control the number of people entering their stores by only allowing people in if they have a shopping trolley. The result is this beautifully German word.

Impfpflicht (mandatory vaccines) – A particularly hard word to say, as it repeats the unusual “pf” consonant combination. One of the most heated debates of the crisis has been over whether to make vaccines mandatory. Germans leaders have frequently reaffirmed the position that vaccines would not be made mandatory.  Still, initiatives like the Impfpass (vaccine passport) have led to accusations of an Impfpflicht through the back door.

Kontaktnachverfolgung (contact tracing) – Early in the pandemic, Germany was praised for the efficiency of its contact tracing regime, which helped keep cases low. In the autumn though, cases rose so fast the the Gesundeitsämter (local health agencies) couldn’t keep up.

Lieferengpässe (delivery bottlenecks) – Another key plank of the pandemic response that hasn’t worked is the purchase and delivery of vaccines. While other western countries, such as Israel, the UK and the USA, have speedily rolled out vaccines, Germany is lagging behind. Due to a lack of supplies and logistical problems with deliveries to test centres, the word Lieferengpässe has cropped up repeatedly in the press.

Maskenverweigerer (mask refusnik) – The people who refuse to wear masks in confined spaces. Unfortunate ticket collectors on trains have faced constant abuse from these people, some of it violent.

Notbremse (emergency brake) – Merkel faced sustained pressure in late February to start lifting the restrictions. The cautious Chancellor eventually conceded, but added a Notbremse into the plans in case cases began to rise again too quickly.

Öffnungsperspektive (opening perspective) – As the lockdown drags on, businesses in the retail and gastronomy sectors are becoming increasingly worried about whether they will be able to survive. They have been demanding that Merkel offer them an Öffnungsperspektive: a definitive timeline for when their businesses can start operating again.

Reproduktionszahl (R-value) – This is a number published by the Robert Koch Institute which estimates how rapidly the virus is spreading at any given moment. If the number is above one, that’s bad news. If it’s below one, the virus is on the wane (at least temporarily).

Sieben-Tage-Inzidenz (7-day incidence) – This is another key value used by decision makers and refers to the number of positive tests per 100,000 inhabitants over the past week. Restrictions can only start being lifted at a value under 50.

Versammlungsverbot (ban on gathering) – Another controversial aspect of the coronavirus rules has been the restrictions placed on one of Germany’s key constitutional rights – the right to protest. Critics say this shouldn’t be restricted at a time when the executive branch of government has so much power. The government says it is necessary in order to stop superspreader events.