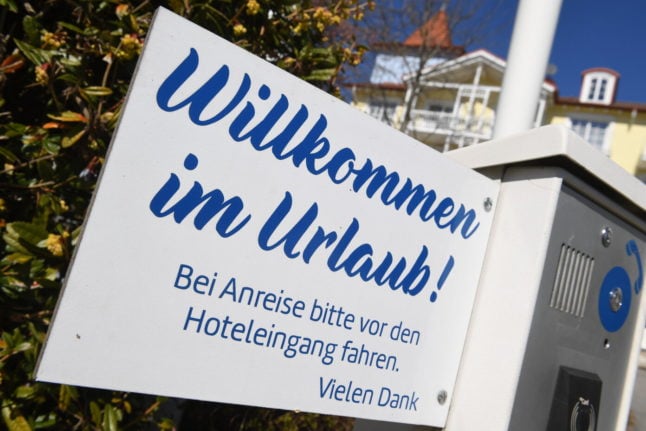 The Easter holidays are starting in exactly three weeks time. Good Friday falls on April 2nd, while Easter Monday is also a holiday, meaning many people in Germany will be crossing their fingers for a short escape from the monotony of lockdown.

But will it even be possible to get out of your town or village for a bit of a breather?

Well, everything is still to play for. And whether people will be allowed to travel will have a lot to do with how the epidemic situation develops over the next ten days.

READ ALSO: What you need to know about Germany’s latest rules on foreign travel

In the week of March 22nd, Angela Merkel will meet the state leaders to agree on the next round of lockdown measures for the beginning of April.

Some state leaders have spoken out in favour of allowing Easter holidays while others are vehemently against relaxing the rules for the religious holiday. Merkel herself is believed to favour a cautious approach.

The current lockdown measures are in place until March 28th.

What are the rules on visiting family?

Since Monday, new contact rules allow for people in one household to meet one other household as long as the total number of people doesn’t exceed five, excluding children.

The German government and states have been urging people not to travel within Germany or abroad unless it is essential. However, travel is not banned – it is just a recommendation.

It will be interesting to see if this recommendation will be lifted at the next round of crunch talks. If that’s the case then it would be perfectly acceptable to travel to stay with family over Easter as long as only two households are staying under the same roof.

If you are visiting parents, and another sibling were to join, that would not be allowed under the current contact rules.

Nonetheless, the most recent rules on restrictions include an “emergency brake” which would send regions back into a hard lockdown if the 7-day incidence rises above 100. The nationwide incidence is currently at 72.4 and has been rising steadily for over a week.

Unlike over Christmas, when politicians temporarily relaxed the rules due to the religious importance of the holiday to allow families to be together, there has been little discussion of an exemption over the four days of Easter.

It is likely, however, that this topic will come up for discussion at the next meeting. Bavarian state leader Markus Söder said back in February that discussions on the subject could only be held ‘“two or three weeks beforehand”.

Will vacation inside Germany be allowed?

Several states have signalled in recent days that they favour a reopening of the domestic tourism sector before Easter.

The northern states, whose coastlines are beloved holiday destinations, have said that hotels and holiday houses should be allowed to welcome guests.

Schleswig-Holstein’s leader Daniel Günther (CDU) told the Redaktionsnetzwerk this week: “Why shouldn’t people be able to stay in hotels and holiday homes at Easter – provided that they show a current negative test and use tracking apps?”

In neighbouring Mecklenburg-Western Pomerania, the head of the tourism board, Tobias Woitendorf, suggested that both states should join forces to put pressure on Berlin before the next lockdown talks.

Woitendorf told the Ostsee-Zeitung that the tourism industry needed to be able to start preparing now. “We can’t just start on March 22nd,” he said.

Mecklenburg-Western Pomerania’s leader, Manuela Schwesig (SPD), has been more cautious, saying only that people should be able to travel inside their own state if the epidemic situation permitted it.

“It would be very nice for all of us if it were possible to spend a few days on holiday in our own state again, at least at Easter,” she has said.

In Thuringia, environment minister Anja Siegesmund (Greens) has said that self-catering holiday lets and campsites should be allowed to reopen, arguing that “rigorous hygiene rules made in time for Easter would allow this to happen with a very low possibility of infections.”

“Easter is in four weeks. Clear agreements on the holidays should have been made, but nothing has been settled,” Siegesmund complained.

Other states have been far more negative about the possibility of travel at Easter.

Michael Kretschmer, state leader in Saxony, said back in February that “unfortunately, there can be no Easter holidays in Germany this year”.

“A return to normality like in autumn would lead to an explosion of infection figures like in November and December,” he added.

Could holidays abroad be possible?

As unlikely as it sounds, holidays to some sunnier regions might be possible at Easter time.

Mallorca, a favourite destination for Germans seeking a bit of Spring sunshine, has seen case numbers fall below an incidence of 50 recently.

This has led the package holiday company TUI to start offering flights to the Spanish island starting on the second half of March.

Nonetheless, the Foreign Office currently considers the whole of Spain to be a risk area, meaning it advises against travel there and people who come back would have to follow the strict testing and quarantine rules.

EXPLAINED: How freely will people be able to travel to and from Germany this summer?

The tourism industry lobby is hoping though to persuade the government to issue separate travel warning for different regions of Spain.

TUI is arguing that the case level on Mallorca is “far below that of most German states”. TUI CEO Andryszak said that he expects the Foreign Ministry to give great clarity on its travel warning for Spain in the next week.

According to the German Automobile Association (ADAC), travel to parts of Croatia will also be possible again by Easter time.

The Balkan country has relaxed some of its lockdown measures, with restaurants now once again open for outdoor dining. Some regions of the country are no longer included as risk areas in a list published by the Robert Koch Institute.

People travelling to both Mallorca and Croatia would need to present a negative PCR test upon arrival.

So, will Merkel go for Easter relaxations?

The biggest obstacle on the path towards a somewhat normal Easter break is likely to be resistance from the Chancellery.

The head of the Chancellor’s Office, Helge Braun, said last week he was “very sceptical” about opening up the tourism sector for the Easter holidays.

With cases beginning to rise again, the Chancellery seems more set on talking about Whitsun as the start of the holiday season.

“I assume that from Whitsun onwards we will be able to talk about travel and leisure in a much more relaxed way,” Braun said.

Whitsun falls on May 21st this year.

For the final decisions, we’ll have to wait until later this month. The Local will report on all developments.