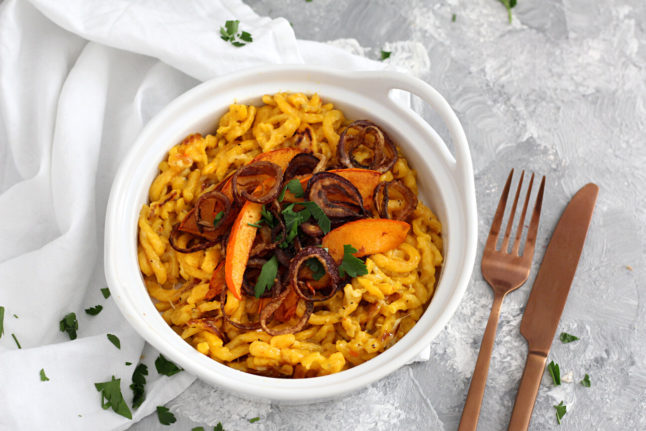 Squeezing out the perfect Spätzle

This south German standard is delicious as a side dish to medallions of pork in a creamy mushroom sauce. But the classic Spätzle recipe is with melted cheese and fried onions. It sure ain’t healthy, but it is incredibly warming.

The name Spätzle is the diminutive form in the Schwabian dialect of the word Spatz, which means sparrow.

While a dedicated faction stands up for the grater, the Spätzle press is widely recognized as the gold standard of Spätzle making. (If you can’t get hold of a Spätzle-maker, you can press the dough through a colander.)

Mix the ingredients in a big bowl until a smooth dough has developed. Let the dough stand for 15 minutes. Meanwhile bring a big pot of water to the boil and add some salt.

Press the dough into the boiling water in batches, making sure to separate your “little sparrows” with a fork. When they have risen to the surface take them out with a slotted spoon and add the next batch.

There are various different German potato salads. The north German variant includes pickles, eggs and mayonnaise. The Bavarian one has pig fat and pickles in it.

For many people though, the benchmark for a great German potato salad is again to be found in Swabia, a region known for the quality of its home cooking.

The Swabian Kartoffelsalat is deceptively simple, containing only potatoes, onions, mustard, meat broth, vinegar and seasoning. But getting it right is an acquired skill.

Firstly, it is crucial to buy waxy potatoes. You cook the potatoes in their skin in boiling water. At the same time, mix two finely sliced onions with hot broth, a tablespoon full of white wine vinegar, a dash of olive oil, a teaspoon full of mustard, and salt and pepper.

Peel the potatoes once they are soft (but not too soft!) and slice them very thinly while still warm (the secret to a real Oma-approved kartoffelsalat is thinly sliced potatoes). Mix the potatoes with the broth, allowing them to soak together. It is important to get the proportions right (500 grams of potatoes to 125 ml stock). Drowning the potatoes is an unforgivable error.

A parsley garnish finishes it off.

The most unusual thing about Brezeln is that one of the ingredients is the chemical agent lye (Lauge in German). Legend has it that a sleepy Munich baker accidentally dunked his Bretezln in this cleaning agent rather than in sugar water in the early 19th century. What came out of the oven had such an appealing dark brown colour that he kept the results and soon couldn’t keep up with the demand.

As well as butter, flour, yeast and salt, you will also need to buy lye, which is an irritant to the skin and eyes. Getting hold of lye seems to be a bit tricky, with some pharmacies selling it and others not. You can obtain it at online retailers though.

To get the dark brown sheen, the raw bread needs to be dipped in a lye solution before going in the oven.

This video takes you step-by-step through the baking process.

Germans love a healthy Roggenbrot, but making one requires commitment as it is normally made with a sourdough starter. All you bakers out there will know that you need to keep your starter in the fridge and regularly feed it.

Sourdoughs also need about a day to ripen, so baking in this way needs patience.

This video by a German home baker takes you through all the steps.

Beating out your Schnitzel

The key to a good homemade Schnitzel is having the dedication and care to beat out a pork or veal cutlet (or even a chicken one) until it has quadrupled in size. You need to put the meat into a zip-top bag and then firmly beat it out with a mallet until it reaches the required size -beating it too hard will tear the meat.

Then you dredge the meat in flour, followed by beaten eggs and then bread crumbs, before frying it on a high heat in lots of butter or oil. Remove the meat to a kitchen towel once golden brown to soak out some of the fat.

A little hack: brush the meat in vodka before dredging it. The alcohol will cause the crust to puff out and leave a truly crispy result.

“Blue cabbage” or Blaukraut is a delicious side dish that compliments any slice of red meat for a hearty evening meal and it is an easy string to add to your German cooking bow.

This video takes you through the simple steps required to make this very traditional German dish your own.