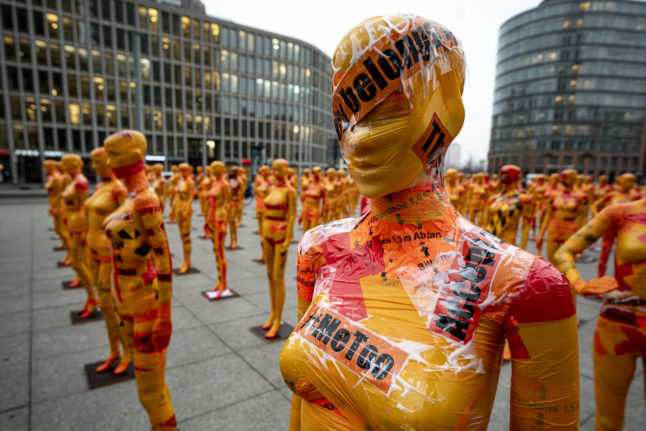 An art installation at Potsdamer Platz in Berlin. Photo: DPA

Dieter Wedel, 81, stands accused of raping an actress in a hotel room during an audition in 1996.

The accusations first emerged in January 2018, and were the first in Germany since the global #MeToo movement against sexual misconduct gained momentum in the wake of the disgraced Hollywood mogul Harvey Weinstein’s downfall.

The allegations against Wedel also took on a political dimension as a public broadcaster was hit with accusations of a cover-up.

On Friday, Munich prosecutors said the lengthy duration of its investigations was because “the facts of the case go back a long time”.

Wedel himself was heard in December 2019 on the case.

The director has denied the claims, with his lawyer Doerthe Korn saying that preliminary proceedings had been initiated against him with “an almost unprecedented public pre-judgement”.

The allegations sparked a row in Germany when it was first revealed three years ago.

State-funded television channel Saarlaendischer Rundfunk (SR) admitted then that it was aware of sexual misconduct allegedly committed by Wedel in the 1980s and continued working with him.

“If the accusations against Wedel are true – and based on the clarity and the sheer number of statements against him, we must assume so – then Wedel is the personification of everything the ‘Me Too’ movement denounces,” columnist Heribert Prantl wrote in the Sueddeutsche Zeitung newspaper at the time.

“Wedel may be the German Harvey Weinstein.”