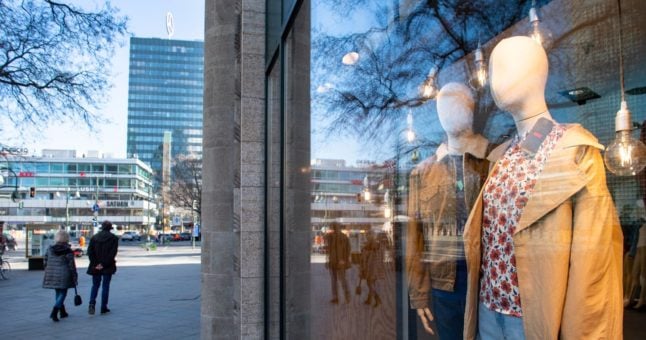 As The Local reported, the shutdown is to be extended until March 28th. However, there will be some changes, and there are plan to reopen parts of public life.

According to the government and states, the “greater availability of rapid and self-testing is a building block” to help deal with the pandemic.

Currently the 7-day incidence in Germany as a whole stands at around 64.7. Only Rhineland-Palatinate (48.6) and Schleswig-Holstein (47.7) have incidence rates under 50 as of Thursday March 4th.

However, some facilities, including shops, will be able to reopen if the incidence rate stays under 100 – with concepts such as appointment booking (so-called click and meet), testing and contact tracing.

Here’s a look at the government and states’ decisions. Keep in mind that individual federal states may differ slightly on their reopening plans.

A first opening step in the areas of schools and hairdressers has already been taken. Schools have been open again for some classes across German states since late February. Hairdressing salons have been welcoming customers again since March 1st.

The second opening step, according to the government and states, is to allow bookshops, flower shops and garden centres to reopen in all federal states from next week. Some states have already started allowing this.

But there has to be strict hygiene plans in place and a limit of one customer per 10 square metres for the first 800 square metres of sales space, and another for each additional 20 square metres, according to the paper.

Service outlets that have been closed until now, as well as driving schools, are also allowed to reopen with safety plans with regular rapid or self-administered testing for staff.

Also from March 8th, body related services, such as beauty salons, can also open. For services where a mask cannot be worn permanently (such as cosmetics), a negative Covid-19 rapid or self-test by the customer and regular testing for staff is needed.

Contact restrictions will also be relaxed to allow two households with a maximum of five people to meet. However, if numbers creep up again, measures can be reversed.

The roadmap put together by the German government is detailed below in German, and gives an idea of the opening steps. Third stage (can be from March 8th)

A third opening step is linked to a stable 7-day incidence of less than 50 new infections per 100,000 residents. If a state achieves this, it can then allow the opening of all shops with restrictions.

Again, according to the paper, shops must comply with the space limits mentioned above. Museums, galleries, zoos and botanical gardens, as well as memorials would also be allowed to reopen.

States may also allow non-contact sports in small groups (with a maximum of 10 people) in outdoor areas.

If the incidence is above 35 but remains below 100 Covid cases per 100,000 people, the government and states say the following applies to these areas:

– Retailers are allowed to open for so-called appointment shopping (“click and meet”). But there are further conditions – the number of customers is limited to one person per 40 square metres of sales space and the appointment must be booked in advance for a fixed period of time, and include contact tracking.

– Museums, galleries, zoos and botanical gardens as well as memorials are allowed to open for visitors – also with prior appointment booking and contact tracing.

But there’s catch. If the 7-day incidence rises above 100 for three consecutive days, a so-called emergency brake comes into effect and the stricter rules that applied until March 7th come into force again, on the second following working day.

The fourth opening step also depends on the incidence rate. If the 7-day incidence remains stable below 50 for 14 days after the third opening step, a state can reopen outdoor dining in cafes and restaurants, theatres, concert halls, opera houses and cinemas, and allow non-contact sports indoors and contact sports outdoors.

If the incidence increases but still remains below 100, the state can keep these areas open, but conditions apply. According to the paper, visitors to outdoor dining areas must then book an appointment and provide details for contact tracing. They may also have to show a negative coronavirus rapid or self-test if several people from different households are at the same table.

Theatres, concert halls, opera houses and cinemas can then also only be visited with a recent negative rapid Covid-19 or self-administered test.

The emergency brake applies to this too: if the 7-day incidence rises above 100 for three consecutive days, stricter rules apply again.

If the incidence has not worsened for 14 days after the fourth stage, the fifth opening step can be taken. If the number of coronavirus infections per 100,000 residents in seven days stays below 50, outdoor recreational events with up to 50 people can be allowed, as well as indoor contact sports.

Furthermore, if the 7-day incidence is stable or declining, and between 35 and 100 new infections/100,000 people, there would be less strict rules for entering shops. And non-contact sports indoors and contact sports outdoors would be allowed without testing.

The emergency brake applies if the if the 7-day incidence rises above 100 for three consecutive days.

What about the other parts of public life?

Further reopening and the plan for the sectors not yet named here, such as the hospitality industry, culture, events, travel and hotels, will be discussed at the next federal-state summit scheduled for March 24th.

They will take into account the testing strategy, vaccination, the spread of virus variants and other influencing factors.