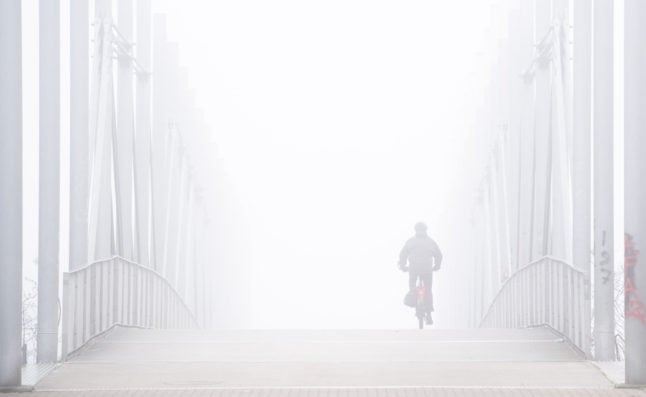 A man rides his bike over a foggy bridge in Hanover. Photo: DPA

February was a record warm month for the Bundesrepublik, with the Mercury reaching 20C or higher. Wednesday was also warm, with temperatures of up to 17C around the country.

But “as of Thursday these warm days are over for the time being. The maximum temperatures will drop significantly, and stay below the 10C mark at the weekend,” said meteorologist Dominik Jung to weather forecast website wetter.net.

Jung even predicted snow in a few locations in the coming week, and black ice on the roads.

At the edge of the Alps, -10C temperatures accompanied by snow and sleet are to be expected, he said.

The roads may become slippery, especially at night. Drivers would be well-advised to use winter tyres for a little longer.

But how long will the cold spell last in Germany? “It is only short-lived. A long March winter is not in sight,” explained Jung. By the end of the second week of March, temperatures are expected to begin rising again.

Here’s a look at what the next week is expected to hold around Germany:

Friday: 3 to 7C, mix of sun and clouds, some showers, snow in some places

Saturday: 4 to 9C, clouds and sunshine, hardly any precipitation

Sunday: 4 to 9C, mix of sun and clouds and dry temperatures

Monday: 4 to 10C, partial rain and snow showers, sleet in the highlands

Tuesday: 5 to 10C, pleasant, with sunny and cloudy weather

In the last week of March, there are then again chances of above-average temperatures, said Jung.

Meteorologist Jan Schnenk from The Weather Channel attributed the lower temperatures to a “broken polar vortex”, which has also caused a chillier March in previous years.