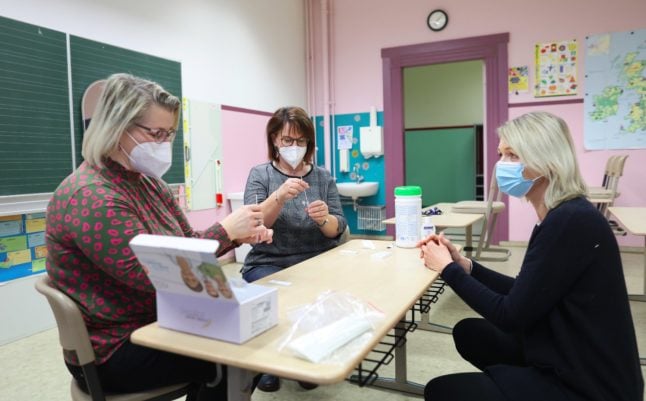 Teachers at a school in Burg, Saxony-Anhalt wait for the results of their self administered coronavirus tests. Photo: DPA

As The Local has been reporting, a draft document shows the government wants to extend the shutdown until March 28th – but relax some restrictions.

Among the proposals, two households with up to five people would be allowed to get together from March 8th.

Under the current rules one household may only socialise with one other person.

The text also proposes that flower shops, book stores and garden centres should be next in line to reopen, after hairdressers were already allowed to open their doors earlier this week.

However most other shops and restaurants, as well as leisure, cultural and sporting facilities, should remain shut until March 28, according to the draft.

“We mustn’t gamble away the successes we’ve achieved,” it says.

The text has yet to be agreed by Germany’s 16 state premiers, who are due to meet with Merkel on Wednesday to decide the next steps in the fight against the pandemic.

It comes as Merkel faces growing calls to ease Germany’s partial lockdown, with surveys suggesting citizens are losing their patience and businesses are struggling to stay afloat after months of shutdowns.

Despite concerns over more aggressive virus mutations, the document says a gradual relaxation of curbs is warranted because of the upcoming ramp-up in vaccine deliveries and the arrival of mass rapid antigen tests.

“These two factors will clearly change the pandemic situation,” it reads.

Health Minister Jens Spahn has promised to offer all Germans free antigen tests soon at designated places like pharmacies, where results will come on the spot.

Germans will also be able to buy cheap testing kits for at-home use soon, after several manufacturers received the regulatory green light.

From April, pupils and teachers back in school should be given at least one free test a week, according to Merkel’s document, with companies also facing testing obligations.

The text stresses that the relaxation of curbs can be reversed should infection rates spike again.

Germany closed bars, restaurants, gyms and cultural centres in November, before adding non-essential shops and schools in December as the country was badly hit by a second Covid-19 wave.

But the daily number of new coronavirus cases has plateaued in recent weeks and even risen slightly on some days, prompting critics to warn against hasty reopenings.

Germany added nearly 4,000 new coronavirus cases on Tuesday, according to the Robert Koch Institute, bringing the total to more than 2.4 million since the start of the pandemic.

Merkel’s draft document explicitly warns of the risks posed by new, more contagious virus variants such as the strain that first emerged in Britain and now accounts for a large share of new infections in Germany.

“The experiences of other countries show us how dangerous the different Covid-19 variants are. They make it clear that we have to be careful when restarting public life,” the text says.

Merkel and the regional leaders agreed last month to hold back on reopenings until the seven-day incidence rate fell below 35 new cases per 100,000 residents.

On Tuesday, that figure stood at 65.4 nationwide.

Bavarian premier Markus Söder was among those cautioning against a “rush to reopen”.

“We can’t lose our nerve now,” he said, pleading instead for the federal government to relax its vaccine priority list.

Germany, like other EU countries, has come under fire for the sluggish pace of its vaccine rollout.

The problem has been exacerbated by a reluctance among some Germans first in line for a Covid jab to take the AstraZeneca/Oxford vaccine, leaving more than a million doses sitting unopened.

“Vaccinate anyone who wants it,” Söder urged at the weekend.