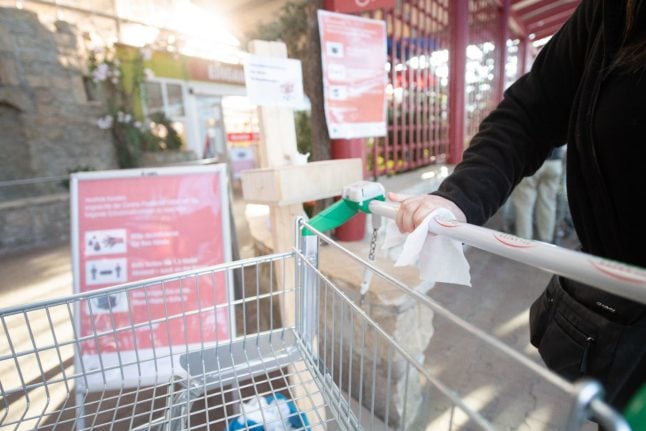 A woman disinfects her shopping cart at a garden centre in Lauffen am Neckar, Baden-Württemberg. Photo: DPA

Hair cuts: what’s allowed (and not)?

For a visit to the hair salon, it will be necessary to register in advance. Men also aren’t allowed to have their beards trimmed because a FFP2, or other medical, face mask is required at all times.

In addition to hair cuts being allowed again – as is the case in all German states as of Monday – hair washing, colouring, styling and drying is also permitted.

Which stores can reopen?

Flower stores, nurseries and garden stores, along with DIY stores, will be allowed to sell plants and accessories in the state. Other merchandise areas must be sealed off.

Both indoor and outdoor areas will be allowed to open.

However, the number of customers per sales area is limited. In stores with up to 800 square meters, only one customer per ten square meters is allowed.

State premier Winfried Kretschmann (Greens) initially spoke of only opening garden markets outside, due to a significantly lower risk of infections. The decision to take further opening steps came as a surprise to many, following several cases of more contagious coronavirus variants being detected.

Baden-Württemberg is following the lead of Bavaria, however, which is also reopening its flower and home appliance stores on Monday.

Hairdressers are already seeing business quickly pick up again. Most of the state’s salons are booked up to three or four weeks in advance, said Matthias Moser, managing director of the Hairdressers and Cosmetics Association of Baden-Württemberg, to DPA.

In the morning, the hairdressers’ phones were ringing off the hook, and numerous online appointment requests were also filling up email inboxes, he added.

Many businesses took reservations immediately after the February 10th announcement that hairdressers would be allowed to open.

“In some cases, customers who were not allowed to keep their appointments because of the December lockdown were also brought forward,” said Moser, whose association says it represents about one-third of the approximately 11,000 southwestern hair salons.

On December 16th, non-essential retail stores, hair salons and schools throughout Germany had to close their doors in response to soaring coronavirus figures.

At the weekend florists were also gearing up for high demand. “We are preparing for Monday as best we can,” said Wolfgang Hilbich, managing director of the Southwest Florists Association.

According to the association, there are about 1,200 flower stores in Baden-Württemberg alone.

What about other store openings?

Kretschmann, however, dampened hopes that other retail stores would open this week. This is only possible if the 7-day incidence of cases per 100,000 residents remains stable below 35, he said.

As of Monday morning, the state had a 7-day incidence of 52.8, one of the lowest rates around Germany, and reported 455 cases within the past 24 hours.

Nevertheless, Kretschmann said that the state needed to find a way to begin reopening in order to lessen the hardship on businesses which have been closed for months.

The Click&Meet concept, or shopping by appointment, as is being carried out from Monday in the state of Rhineland-Palatinate, could also be a possibility.

The Green politician warned that the current situation was “highly problematic” because of the effects of the more contagious coronavirus variants.

Caution must be exercised, he said, which is why he wants to proceed only “piecemeal”.

Depending on the infection rate, the state could also soon see a possible reopening of museums and restaurants.

On Wednesday March 3rd Chancellor Angela Merkel (CDU) will meet with Germany’s 16 state premieres to decide on a roadmap out of the shutdown.

READ ALSO: State by state: What are Germany’s plans to reopen public life in March?