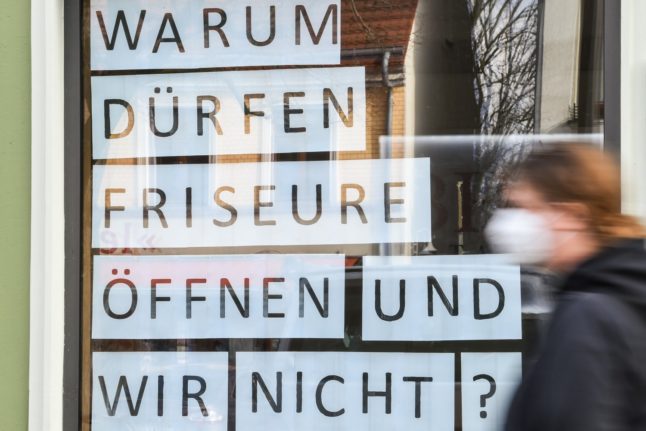 A woman walks past a clothing store in Friedrichshagen which reads 'Why can hair saloons open but we can't?' Photo: DPA

Federal and state leaders have been engaging in increasingly heated debates about plans to reopen public life.

On March 3rd, Germany’s state premiers will meet with Chancellor Angela Merkel (CDU) to discuss how to proceed. Already, several German states have announced that they will relax certain measures.

Bavaria and Baden-Württemberg, for example, want to reopen DIY stores and garden centres. Rhineland-Palatinate wants to allow shopping in clothing stores by appointment.

Other federal states, however, are skeptical; in Hamburg, even the mask requirement is set to be tightened. What will apply, and where, starting next week?

Garden centres, garden markets and flower stores in Baden-Württemberg will be able to reopen next Monday. According to the florists’ association, there are 1,200 flower stores in the southern state alone. In addition to florists, hairdressers will also be allowed to reopen on March 1st, as is the case across Germany.

Depending on the infection rate, it’s also planning possible re-openings of museums and restaurants.

READ ALSO: What you need to know about Germany’s extended COvid-19 measures and openings

In addition to opening DIY stores, Bavaria also wants to allow individual lessons in music schools from next Monday – but only in places where the seven-day incidence is below 100, said state minister Florian Herrmann (CSU) after a cabinet meeting.

Earlier, state premier Markus Söder (CSU) announced that nurseries and garden markets would be opened to prevent customers from buying goods crowded at discount grocery stores. These are perishable goods, he said. Personal services, such as those provided by hairdressers and chiropodists, may also be provided again from Monday.

According to Bavaria’s minister of economic affairs Hubert Aiwanger, hotels and restaurants should again be allowed to accommodate guests with a negative coronavirus test starting on Easter weekend. From Monday, garden markets, nurseries and flower stores will be allowed to reopen, in addition to hairdressing salons, as state premier Dietmar Woidke (SPD) announced on Tuesday.

“This is a small step, I am aware of that,” Woidke said.

There is no concrete timetable for further opening steps, but Woidke nevertheless wanted to point out prospects.

“From Brandenburg’s point of view, retail, museums, exhibitions, outdoor sports, open-air events should be given a perspective in this sense, if possible before Easter,” he said.

Instead of easing restrictions, the Hamburg Senate debated a tightening of the coronavirus rules on Tuesday. The result: starting next weekend, a general mask requirement will apply at least in all busy places in the Hanseatic city.

This applies in particular to highly frequented places such as Stadtpark, Jungfernstieg or Landungsbrücken. Joggers will also be affected. Senate spokesman Marcel Schweitzer even recommended that people always wear a mask as soon as they leave their own homes.

So far, there is nothing to suggest that Hesse will relax restrictions before the March 3rd meeting. The head of Hesse’s state chancellery, Axel Wintermeyer (CDU), recently stressed that the growing spread of virus variants in Germany could call planned opening steps into question again.

“We must continue to persevere in order to gradually return to normality,” he told the Evangelischer Pressedienst (epd).

The main task, he said, is to prevent a major third wave that would undo the successes achieved so far.

Nevertheless, he said, “We will talk concretely about opening steps and plans in the next state conference, even if we cannot yet agree on fixed dates in many cases.”

State premier Manuela Schwesig (SPD) has continued to urge caution on the pandemic ahead of the state’s coronavirus summit on Wednesday.

“I understand the desire for further opening steps. Unfortunately, the numbers show that we are not out of the woods yet. Therefore, we must continue to be cautious,” Schwesig told DPA on Tuesday.

“We want to discuss a step-by-step plan, and how openings can look like with coronavirus numbers below 35.”

READ ALSO: Is this Germany’s step-by-step plan for coming out of lockdown?

DIY stores and garden centre have been open in Lower Saxony since February 13th. Car dealers are once again allowed to offer test drives in the state. At the beginning of February, State premier Stephan Weil had presented a step-by-step plan.

State premier Armin Laschet, who is also the new leader of the CDU, has continued to urge for cautious in dealing with the coronavirus pandemic.. Not least because of the growing spread of the more contagious British virus mutation. Caution remains the “order of the day,” Laschet said Tuesday.

“At the moment, openings are only possible to absorb severe damage,” the prime minister stressed. For this reason, he said, elementary schools have now been opened “as promised” – in a total of 10 German states.

“An elementary school student cannot experience education in front of a screen in the long run,” Laschet said.

For far-reaching openings of public life in the coming weeks, a number of accompanying protective measures are necessary, according to Laschet, who plans to reveal the state’s next steps following the national meeting on March 3rd.

READ ALSO: ‘The right thing to do’: How Germany is reopening its public schools

In addition to hairdressers, flower stores, driving schools, pedicures and zoos will also be able to open from next Monday.

Garden and hardware stores will be allowed to sell a “garden centre-typical assortment,” but only outside, State premier Malu Dreyer (SPD) announced.

Individual lessons in music schools are also to be permitted again – with the exception of wind instruments. Stores will also be allowed to let individual customers into their stores to try on clothes, for example, after making an appointment in advance.

“We are also expanding our ‘click and collect’ regulations on a small scale,” Dreyer said in response. “As of March 1st, ‘appointment shopping’ will then also be possible.”

Opening steps  must be accompanied by increased testing, according to Saarland state premier Tobias Hans (CDU).

“From my point of view, it is important that we continue to be cautious in this and combine the openings with the expansion of tests,” Hans told DPA. “We must not rush into anything, but should proceed gradually.”

At the next federal-state consultations on March 3rd, he said, further opening steps would be discussed – depending on the pandemic situation at that time. “We are in a difficult phase right now,” Hans said.

The Saxon government does not see any major opportunities for easing restrictions at the moment, said state chancellery head Oliver Schenk (CDU) after a cabinet meeting in Dresden. He justified this primarily with the increase in mutations of the coronavirus in Saxony.

Garden and DIY stores will also be allowed to reopen in Germany’s northernmost state from March 1st. A spokesman for the state government stressed that Schleswig-Holstein’s step-by-step plan would remain in place as the basis for the forthcoming discussions between the federal government and the states.

According to this plan, further opening steps are to be strictly linked to incidence figures, the R-value and the burden on clinics. The aim would be to reopen the retail trade conditionally on March 8th, and then possibly also the catering and hotel trade at the beginning of April.

READ ALSO: Is this Germany’s step-by-step plan for coming out of lockdown?

A new coronavirus ordinance has been in effect in Thuringia since last Friday, extending the lockdown in its main features until mid-March for the time being instead of only until March 8th as planned. However, it also contains relaxations.