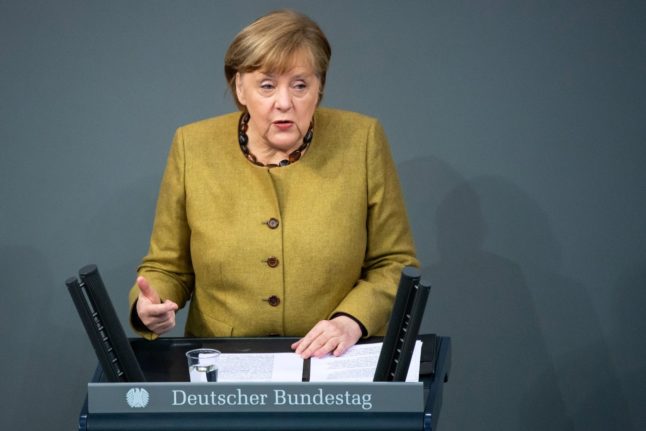 Chancellor Angela Merkel speaking in the Bundestag last week. Photo: DPA
How does Germany measure the state of the pandemic?
As Chancellor Angela Merkel has pointed out, we all know how personal the coronavirus pandemic is. More than 67,000 people have died from or with coronavirus in Germany – they are someone's loved one (or our own), whether it's a brother, sister, father, mother, daughter, son or friend. We probably all know someone who has been sick or affected by the pandemic in another way.
We can't lose sight of that. But how do we look at the bigger picture and measure when restrictions can be eased or brought in?
Across the world, every country's political leaders and scientists measure the pandemic differently to try and make sense of it.
At The Local Germany we look at the coronavirus numbers published by the Robert Koch Institute (RKI), the country's public health agency, every day. These include a breakdown of new cases reported in 24 hours, deaths and the reproductive number (how many people a Covid-infected person goes onto infect). But one number that has become more significant in recent months is the '7-day incidence'.
What is the incidence and why is it important to Germany?
At the beginning of the pandemic in spring 2020, everything revolved around the reproduction number (R0). The important thing we were told then was to keep it under 1.
The R number is still in the picture, but now the incidence number has a much bigger role in analysing the infection rate.
In Germany, the 7-day incidence indicates how many new infections there were per 100,000 inhabitants in the last seven days.
If too many people become infected, districts have to take protective measures: extended mask rules, curfews, alcohol bans, restrictions on the number of people at meetings, travel restrictions, etc.
On Thursday the incidence stood at 57.1. When the second wave was at its peak just before Christmas, the incidence was nearly 200. The RKI also shows the incidence of districts across Germany, as this tweet by a Berlin-based journalist shows.
Looking at the incidence rate can give us a clear picture of how the situation is developing, although other factors such as how busy intensive care units are and the number of cases are also important.

Last graph show why the elderlies get the #vaccine first ? pic.twitter.com/vKCe8b8On1

So what is Germany aiming for?
Over the last months we've heard a lot about Germany's aim to get down to under 50 new Covid-19 cases per 100,000 people in seven days. Political leaders repeatedly said this is the level at which health authorities are still able to trace contacts of people infected by coronavirus. We were previously told that restrictions could begin to be eased and public life could reopen when this is achieved.
So is an incidence of 35 the aim now? What happened to 50?
At the last talks between Merkel and the state leaders, they announced that more of public life would reopen when Germany reached under 35 new Covid-19 cases per 100,000 residents. For many it felt like the goal posts had been changed. Why was this new aim brought in suddenly?
First of all, 35 as an aim isn't totally new. As early as May 2020, the federal and state governments were wrestling over the limit for the 7-day incidence – but back then it was about at which threshold restrictions should be re-introduced following the first wave. And at this point the numbers 50 and 35 were under discussion.
Among those that pushed for the lower threshold of 35 was Merkel's chief of staff Helge Braun. But the federal states thought that was too low and pushed for 50.
The Bundestag also wrote both of these limits into the Infection Protection Act. According to the law, “comprehensive protective measures” are called for above an incidence of 50, and “broad-based” measures are called for above 35. But there is nothing written in the law about when Germany should ease restrictions – so this is new territory.

Easing of #lockdown will now only be possible when for 3 successive days:

35 infections/100 000 people/7days
B4 the target was 50.
Lockdown extended till 7 March.
Decision driven by fear of #Corona #mutations
Next review: 3 March

Ok so both numbers are significant…but Germany is definitely aiming for lower rates before getting out of shutdown. Why?
The more contagious coronavirus variants have complicated the situation. Leaders and experts in Germany are concerned that the variants, particularly the British strain which is already spreading quickly, will result in exponential growth if things open up too quickly.

So the worry is that the more people socialise and come into contact with each other again, the variants are given a chance to spread further.

IN NUMBERS: What is the coronavirus situation around Germany?

The Chancellor has said that shops, museums and galleries could begin to reopen when Germany reaches a stable 7-day incidence of under 35 new cases per 100,000 people.

During a recent interview, Merkel said 35 was a precautionary number – but that some things were opening up at an incidence of around 50 such as hairdressers (which can open on March 1st when Merkel hopes this goal will have been reached).

“If you go below that number (35), you can think about taking larger steps to open up the system. That's why we have linked this with the retail trade, the galleries and the museums,” she said.

So it's no doubt the aim has changed, although 50 hasn't disappeared.

“The decision was made (to focus on an incidence of 35) to be extra careful and not allow the variants – that are believed to be spreading faster – to “initiate” a next wave of infections,” Tobias Kurth, professor of public health and epidemiology at the Charité in Berin, told The Local.
However, he added that there is “no scientific evidence for an incidence of 35, 50, or any other target” – these numbers are just “used on some guidelines”.
Are we really in danger of a Covid resurgence?
So could it really be the case that if Germany opens things up too fast there will be a third wave soon after?
Kurth said this is difficult to predict. “The fear is that we do not 'reset' the epidemic enough so the health officials (Gesundheitssämter) can do their test, track and trace tasks.
“For sure, the lower the number of new infections will help to re-establish that. When exactly will this be possible? No one can really say as we do not conduct enough research on the population level to provide evidence – which is a major issue since the beginning of the pandemic.”
It also depends on how quickly the variants spread in Germany, or if we can keep them under control.
Many scientists in Germany believe the country should be aiming for an even lower incidence – such as under 10 new Covid cases per 100,000 people within seven days.
But leaders, including Health Minister Jens Spahn, have said that Germany cannot pursue a so-called 'zero-Covid' or 'no-Covid' strategy (similar to countries like New Zealand), mainly because the country is not an island.
READ ALSO: At what point could Germany begin easing Covid restrictions?
Others have called for an end to lockdown measures and a new strategy in dealing with the pandemic.

This could involve opening up schools and some businesses with extensive testing while protecting vulnerable people and those in old people's homes, for example.

For Kurth, the way back to some kind of normality without future lockdowns comes down to inoculation.
“Vaccinate, vaccinate, vaccinate,” he said. As this is happening at a fairly slow pace in Germany (and some other European countries) due mainly to supply issues, Kurth recommends that FFP2 masks could be made mandatory in every public space as a part of additional measures to protect the population.