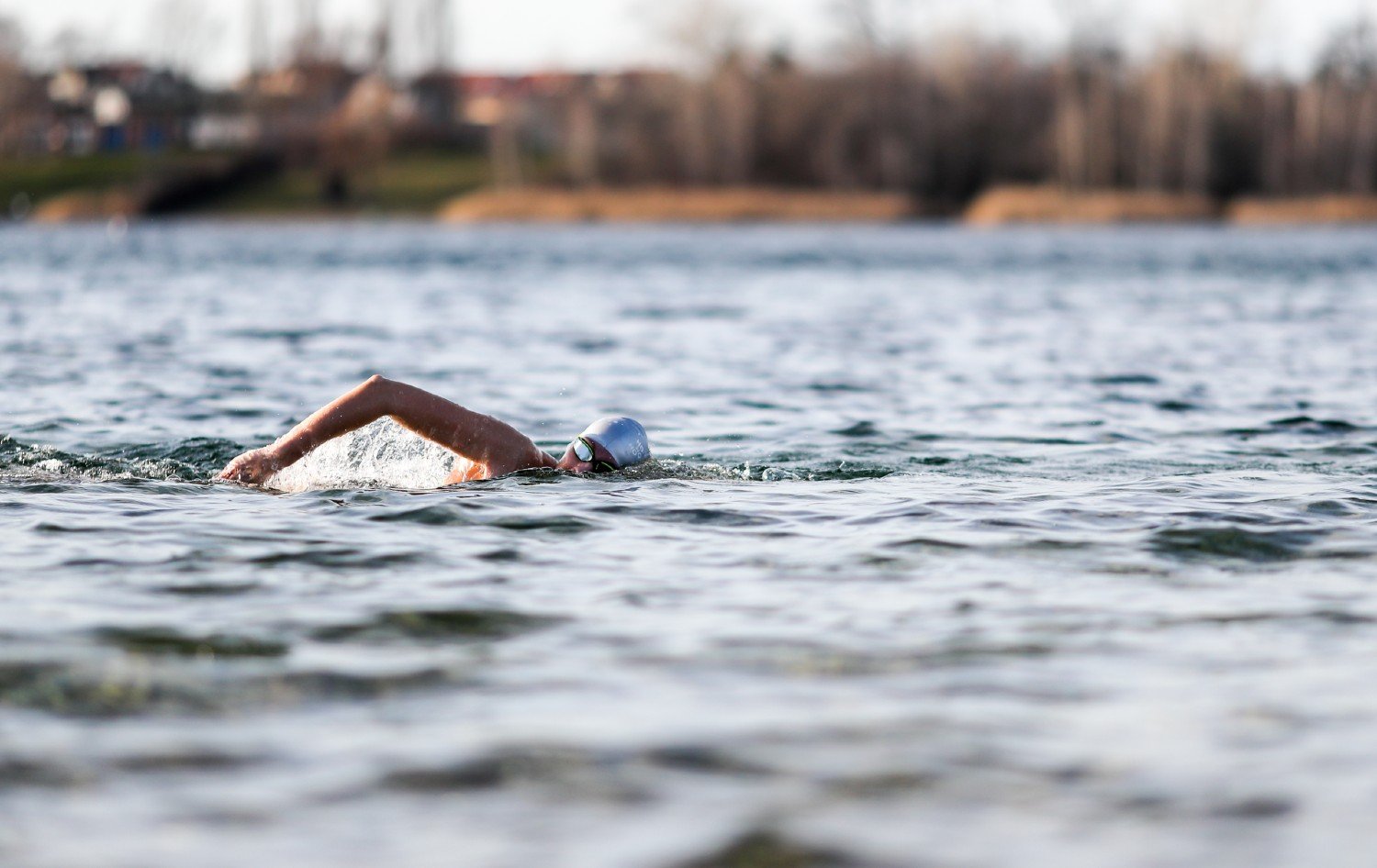 Jakob estimates the water is about zero degrees this morning. We are standing on the edge of the Spree opposite of Treptower Park, one of the weekly meeting spots for the Ice Dippers community in Berlin.

Despite being surrounded by snow, the river has not yet frozen over –  much to Jakob’s dismay, who says that it’s ”more fun when there is ice”.

He says it will probably freeze this coming week in February – set to be Berlin’s coldest period this year.

While the lockdown continues, those looking for a new activity should look no further than ice bathing.

I’m discovering that it’s pretty popular in Berlin – visit the city’s lakes at the weekend during winter and you will often see brave souls cracking through the ice and striding out for a swim.

Braved the snowy weather for a hike at Berlin's #Schlachtensee and then spotted some even braver souls going for a dip in the icy water. #adventuresinlockdown pic.twitter.com/S8l51isUh0

While you can find people ice bathing across the city, there is a dedicated ‘Ice Dippers’ community, which arranges organised dips at Alt-Stralau and Plötzensee every Saturday.

Jakob, a seasoned pro who organises the one at Alt-Stralau, says that although numbers have dwindled due to Germany stricter shutdown implemented in December, usually you can expect a sizeable group of up to 30 people.

The sense of camaraderie it has built, he says, is one of the best things about it.

“We have a great community, which has been lacking a bit this year due to COVID-19,” he said.

But before then there would be quite a big group of people coming on a regular basis, and you get to know each other well. It is much easier to do the ice dipping in a group than going alone.”

The benefits of ice dipping are well-documented; it is has been said to be good for your immune system, gives you an endorphin kick, boosts your energy, and fights inflammation.

So with a bit of luck and a lot of bravery, you may emerge from ice dipping season with a stronger body and a clearer mind.

This was my first attempt at ice dipping, and depending on how you look at it, I picked the worst or the best time to try it.

Worst because obviously it is unbelievably cold right now, or best because, well, how much harder could it get after this?

On the advice of Jakob, I came prepared with a thermos of hot tea, warm socks, a towel, and most importantly: a positive  attitude.

After some reassurance that the likelihood of dying from hypothermia was low (which is always good to hear), we started the ice dippers' ritual before diving in. This consisted of a set of breathing techniques to prepare the body to enter freezing temperatures.

READ ALSO: A guide to Berlin's hidden swimming spots – from the woman who wrote the book on it

It involved a controlled hyperventilation, where you hyperventilate for 30 breaths, after which you breathe out and hold for as long as possible.

You do this for three rounds, and on the third round, after breathing out and holding your breath you do as many push-ups as you can.

These breathing techniques were first introduced by renowned ‘ice man’ Wim Hof. He explained that when you’re in the water you should breathe properly, as this allows oxygen levels in the tissues to increase and adrenaline to flood the body, granting strength we did not know we had.

While some are divided on whether this helps or not, it is routinely practiced by the Ice Dippers group to prepare physically and mentally for the challenge.

After the breathing techniques, and my poor excuse for a few push-ups, my body temperature felt slightly warmer and as ready as it was ever going to be to take the plunge.

We undressed as quickly as we could (either fully or down to bathing costumes), stood at the edge of the water and screamed – a great way to get rid of that last bit of nervous energy we had.

As I stepped into the water, the shock of the temperature hit me immediately. The group encouraged me to step further into the water, but my initial (and understandable) reaction was to jump back out.

Once you have made it in the water (well done!), Jakob shares that it’s important not to get your hands wet, as they are very sensitive and will hurt quickly, and that you must keep your head dry also.

The key part of staying in the water? Do not panic. Take long, deep breaths, and as your breath becomes normal you will find yourself being able to stay in the water for longer. However, he also recommends that beginners to ice bathing should stay for a few minutes at most.

”Take deep breaths”, fellow ice dipper Adrian advised me. I focused on my breathing, and felt myself calming down, and while I felt some numbness in my legs and feet, I did feel simultaneously invigorated.

Like with many challenging experiences, I found that time goes slowly in the lake, and once Jakob confirmed I had been in the water for over a minute, I decided my time was up. Upon returning to dry land, I sought much-needed solace in the hot water bottle and thermos.

On first Saturday of February when I attended, there were 10 other people there. Some stayed for five minutes, others for 15. Adrian, who started ice dipping at the end of October, describes ice bathing as a reset.

”At first I thought it was crazy,” she told me, “but now I like it a lot. I like that when you are in the water, you don’t think about anything else, so it’s like a little reset. I like the feeling that I have done something strenuous and challenging.”

So what is the best way to prepare for ice dipping? Contrary to popular belief, Jakob believes that cold showers won’t be the thing that necessarily helps you.

“That experience isn’t really transferable to ice dipping – it is a very different thing,” he says.

“What I find that is most helpful is going with a group and being part of a community. When you go together, it normalises what you are doing, and people push each other to challenge themselves further.”

So how do I feel about my first attempt at ice dipping? While I managed just over a minute and spent the next half hour shivering, I felt  good about taking on the challenge, and quite energetic for the rest of the day.

Even though Berlin’s temperatures are set to drop further over the coming weeks, I’m sure I’ll be braving it again.

Who knows, maybe for two whole minutes this time.

Visit the Berlin Ice Dippers webpage for more information about the community. This article represents an opinion, and a doctor should be consulted when seeking out medical advice on whether it's suited for you.