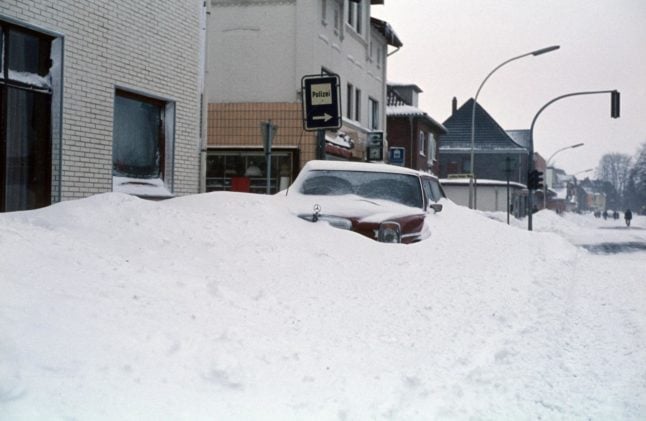 Signs hanging throughout the harbourside German city of Stralsund try to provide hope for getting through the pandemic.  “We managed the winter of 78/79,” they read amid a list of previous challenges overcome, including the Fall of the Berlin Wall, “Corona? We can also get through that.”

So just what was so bad about this winter at the end of the 70s to merit comparison to big societal shifts?

As any city such as Stralsund, Mecklenburg-Western Pomerania in northern Germany will recall, the months-long storm saw snow fall so fiercely that it kept people trapped inside of their homes, caused traffic accidents, and even claimed lives. 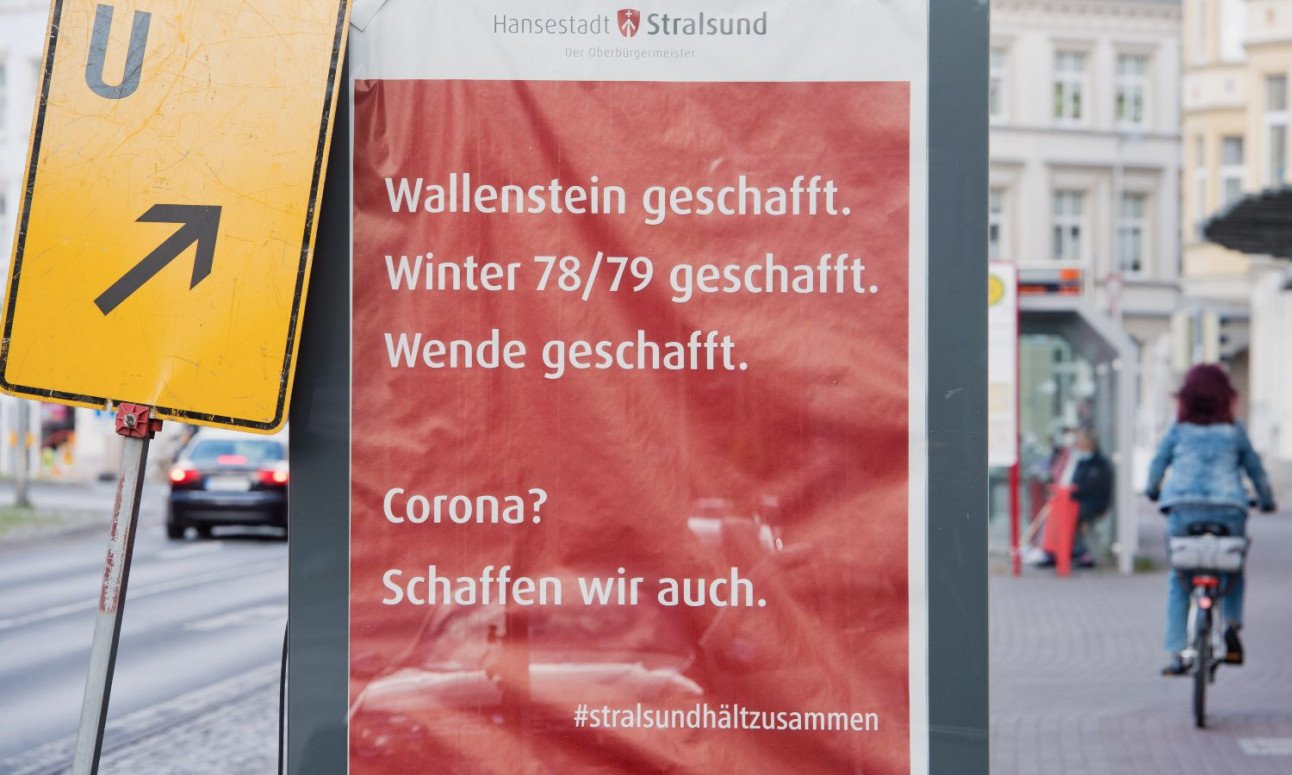 And it’s the same historical event that meteorologists have been invoking this week, cautioning that the “catastrophic winter of 78/79” could repeat itself in the coming days – although it may not come to that.

However, due to a so-called weak polar vortex, they fear the damages from heavy snow storms about to strike Germany – in some regions up to 50 centimetres high and with temperatures dipping to -7C.

READ ALSO: Weird weather: Temperatures between -7 and up to 20C expected in Germany at weekend

In the days before instant weather alerts on smart phone apps, few people could see it coming: on the morning of December 28th, 1978, the temperature was still a comfortable 10C above zero.

But then, abruptly, everything changed.

Over northern Germany, icy air masses were superimposed on warm, humid Atlantic air – similar to the phenomenon expected to occur this weekend.

From the afternoon on, temperatures plummeted by up to 30C. Snow began to fall heavily, and quick northern winds led to storms stretching to Berlin.

At the turn of the year leading into 1979, northern Germany was coated in snow which piled up several metres high. Countless roads were no longer passable and power shortages plagued many areas as falling snow tampered with wires.

But that wasn’t all. The snow and ice storm was joined on the Baltic coast by a severe flood, sweeping through entire neighborhoods in Flensburg, Schleswig and Lübeck, and damaging the port facilities in Sassnitz on the island of Rügen on the Baltic Sea. 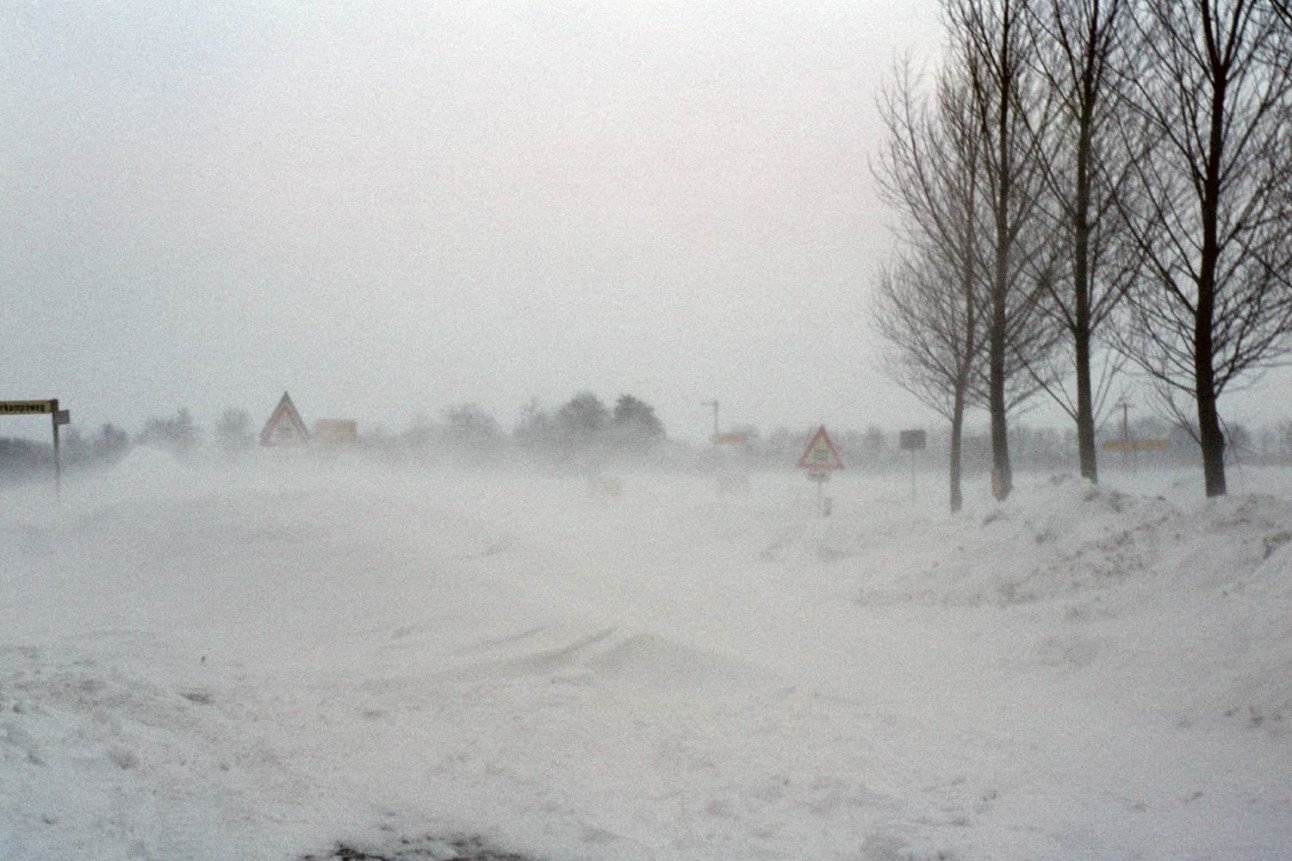 Snow completely blocked roads, such as this one in Hohenlockstedt, Schleswig-Holstein, at the end of 1978. Photo: DPA

Matthias Reimer, who lived in the northern city of Lüneburg, recalled his amazement at the layers of snow outside of his home which reached two metres high.

“I called my boss to tell him that I wouldn't be able to get to work that day,” he said to The Local. “And he told me that I wasn't the only one who wouldn't show up.”

Reimer and his family were trapped inside of their home over the days to come. Having learned to stock up with supplies following another intense snow storm in 1969, they already were prepared with a freezer and “an old wood oven in the cellar so we were able to cook and to heat,” he said.

After three days, the family was freed. “During that time my father tried again and again to break through the snow,” said Reimer.

“He suffered most from the situation. Not because he starved but because he was a smoker and ran out of cigarettes.”

East and West German armies and volunteers came to help

A disaster alarm was sounded in numerous districts and cities; in the northernmost state of Schleswig-Holstein, 80 villages were completely cut off from the outside world.

Helicopters supplied people trapped in their homes from the air, and around 30,000 helpers from various organisations including the German Red Cross and the Bundeswehr.

In what is now Mecklenburg-Western Pomerania in the north of the GDR, the National People's Army came to the scene. With the help of tanks, among other things, they worked to make roads accessible again. Helicopters also supplied people trapped in their home from the air.

The situation was also bad in Berlin. As traffic came to a halt in the streets of the capital, “volunteers shoveled away snow which had piled up on cars,” Rositha Lenz, a lifelong Berliner in her late 70s, told The Local. 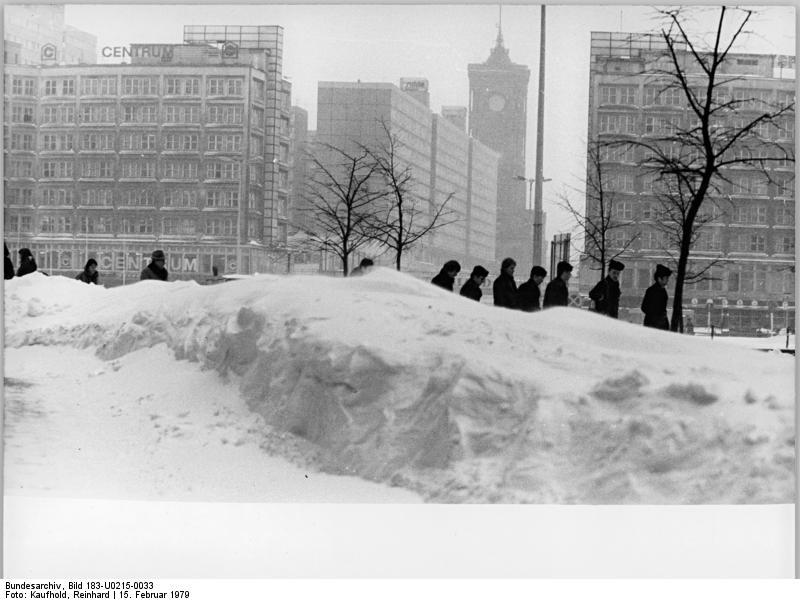 Snow piled up outside of Berlin's Alexanderplatz. Photo: DPA

Yet even the winter of 78/79 paled in comparison to previous winters, she said. Reflecting on her childhood in the post-war years in 1946 and ‘47, she said that it was “extremely cold” with no central heating and thin windows – “not the double layers we have today.”

“People carried coal to have enough heat,” said Lenz, adding that the decades which followed were not much better, with Fensterblumen (frost work) forming on the windows and coating roofs every year.

She added: “Nowadays we have some really warm weather in the winter.”

Snow in some places until May 1979

For weeks to come, northern Germany was covered in a complete blanket of snow, and roads completely blocked. In Husum, a seaside town in Schleswig-Holstein, snow continued to fall until May 20, 1979.

According to crisis researcher Frank Roselieb, the exceptionally harsh winter cost the lives of 17 people in the-then Federal Republic alone, and several hundred in the GDR, according to recent findings. Exact figures were never fully disclosed.

Nevertheless, the experience of the extreme winter also had a positive side for many people. The common need welded neighbours together, with people helping each other where they could.

“It was an incredibly friendly togetherness. People talked to each other more again,” said firefighter Johann Müller from the East Frisian town of Norden in an interview with public broadcaster NDR.

“There was communal shoveling of roads. There was a sense of community that I remember fondly.”