A sign in a Düsseldorf bakery stating that service will continue during the Lockdown. Photo: DPA
DPA/The Local
[email protected]
@thelocalgermany


The term "lockdown," which has become common for closures and contact restrictions during the coronavirus crisis, has been chosen as the 2020 "Anglicism of the Year."

“What convinced the jury about the word lockdown, in addition to the central role it plays in the discussion about measures to contain the pandemic, was its rapid integration into German vocabulary,” the panel led by Berlin-based linguist Anatol Stefanowitsch announced Tuesday.

The similar word “shutdown” refers to shutting down public life rather than on restrictions on freedom of movement, the jury said.

However, it has become less popular than “lockdown,” probably because it can't be used as broadly.

The Anglicism of the Year initiative has recognised “the positive contribution of English” to German vocabulary since 2010.

Regarding the history of the use of the word “lockdown,” the jury wrote: “After paraphrases such as 'Maßnahmen gegen die Corona-Pandemie' (measures against the corona pandemic) or 'Maßnahmen gegen die Ausbreitung des Coronavirus' (measures against the spread of the coronavirus) were initially used at the beginning of the pandemic, the word lockdown then quickly spreads from the second half of March.”

Its use sharply increased again in October, just before the country introduced a “Lockdown Light” or partial lockdown which only saw some businesses close but stores and schools stay open.

In English, the word has been in use regularly from the early 1970s onwards, initially for situations in which prison inmates were not allowed to leave their cells for a longer period of time, such as after a riot.

From the 1980s onward, it also referred to situations in which an entire area was sealed off for security reasons. This meaning is also occasionally seen in German, for example in media reports about rampages at American schools.

However, it was only in the course of the Covid-19 pandemic that the meaning expanded to its current one. 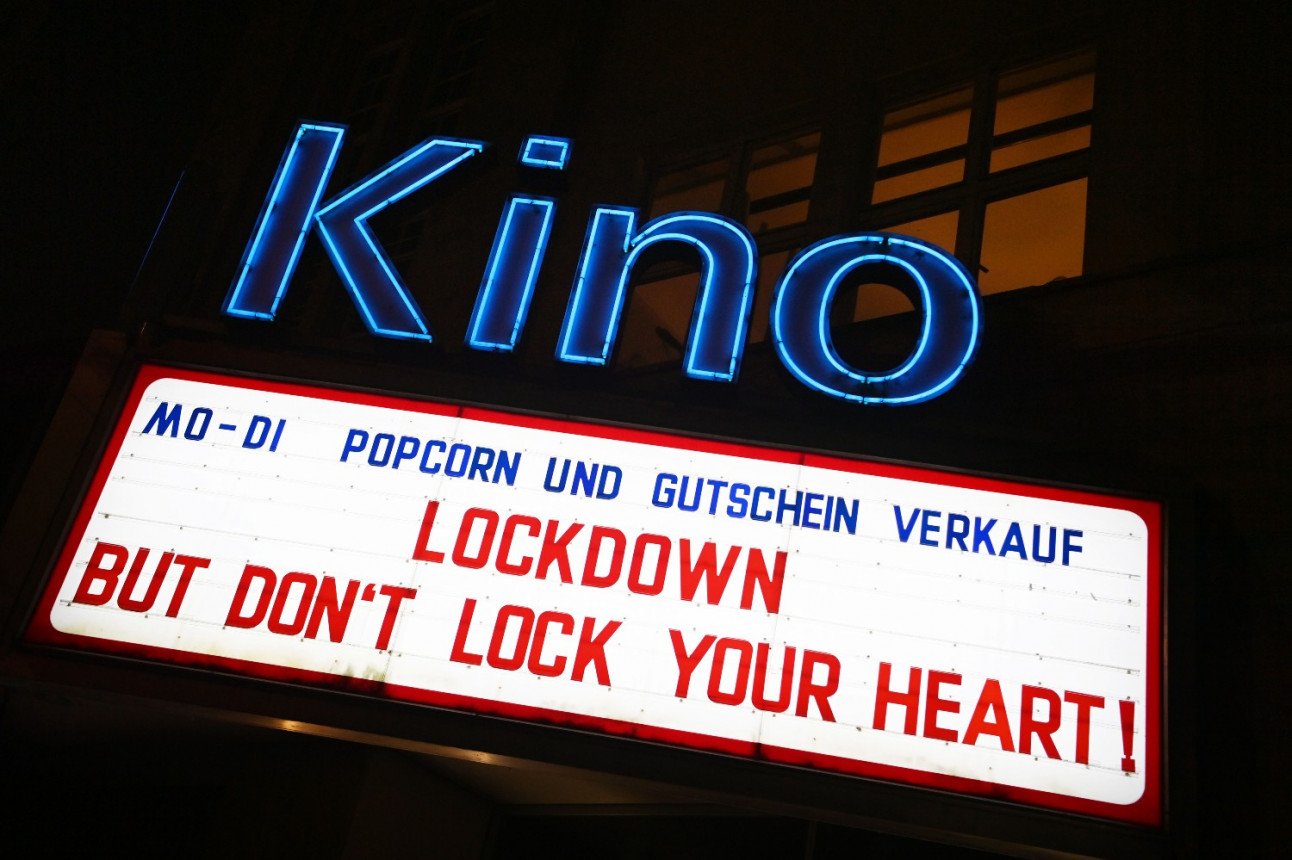 A closed cinema in Stuttgart made a play on words with Lockdown in December. Photo: DPA

According to the jury, words such as “social distancing,” “superspreaders,” “home office” (though not commonly used as a term in English) and “homeschooling” were also good candidates for 2020.

With the term “social distancing”, however, there had been a discussion as to whether a restriction of physical contact could still be considered social restriction at all in the communication age.

The term is now being replaced more often by the German compound word “Kontaktbeschränkung” or “contact restriction.”

The word “superspreader” refers to an infected person who passes on the virus to a large number of people. It is also used with a moral undertone when referring to culprits of a particular outbreak.

READ ALSO: Why is Bavaria so concerned about impact of 'American super spreader'?

In 2020, the word “home office” had become a synonym for working at home on a lockdown basis – and there, due to the lack of a study, often rather in the kitchen or living room.

The word “homeschooling,” actually a term for a marginal practice in Germany in which parents teach their children at home in order to keep them out of the state school system, quickly became a catch-all term for school substitute activities by parents or else for teachers teaching via video.

From corona dictators to baby elephants

The Anglicism of the Year joins the ranks of the other international linguistic annual reviews. As Germany's “Word of the Year” 2020, the Society for the German Language in Wiesbaden already chose “corona pandemic” on November 30th.

On January 12th, the term “corona dictatorship” was proclaimed “Unword of the Year” by a jury in Darmstadt.

READ ALSO: 'Corona dictator' named one of Germany's ugliest words of the year

In German-speaking Switzerland, “Systemrelevant” was named word of the year, followed by “Maskensünder” (sinner who doesn't wear a mask) and the verb “stosslüften” (impact ventilation).

In Austria, “coronaparty” was the Unword. “Babyelefant” was the word of the year.

The animal's imagined size is supposed to describe the recommended distance in times of pandemic.