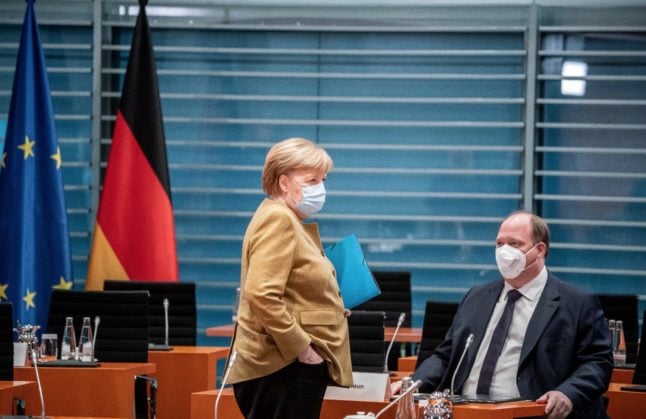 Merkel and Braun at a cabinet meeting on Monday. Photo: DPA

Helge Braun argued that Germany should abandon its fiscal discipline — enshrined in the constitution as a rule dubbed the “debt brake” — for a few years to help dig the country out of a deep recession caused by the coronavirus pandemic.

But his suggestion immediately ran into fierce opposition from within Merkel’s conservative CDU-CSU alliance. Her spokesman Steffen Seibert moved to distance the government from what he described as Braun’s “personal opinion”, according to German media.

The “debt brake” forbids the government from borrowing more than 0.35 percent of gross domestic product (GDP) in a year.

But with entire sectors idled to halt the spread of Covid-19, Merkel’s government has stepped in with over a trillion euros in aid and stimulus to tide over companies and employees.

Braun, chief of staff at the chancellery, said it will take a few more years before Germany can report a balanced budget again.

“The ‘debt brake’ cannot be complied with in the coming years, even with strict spending discipline,” Braun wrote in a commentary for the Handelsblatt business daily.

It would “make sense to combine a recovery strategy for the economy in Germany with a change in the Basic Law”, he said, referring to the constitution.

The amendment should prescribe a gradual return to compliance with the debt rule “with a clear date”, he said.

The move should be viewed as a “strategic decision for economic recovery,” added Braun, who is a close ally of Merkel.

By offering more flexibility on debt, the government would be able to hold off on hikes in taxes or social charges, he argued.

Braun stressed however that Europe’s biggest economy must return gradually to its limits on new debt once the recovery is on track.

“We cannot solve the economic consequences of the pandemic in the long term with higher debt or higher taxes,” he told Die Welt daily.

“A coherent economic concept is needed. Germany stands for financial seriousness and we should stay that way,” added Söder, who has been touted as a possible successor to Merkel in Germany’s top job following elections on September 26th.

The CDU’s new leader Armin Laschet also stressed in a meeting with CDU lawmakers that his party holds firm to the no-new-debt rule, according to German media quoting sources at the talks.

Earlier, Eckhardt Rehberg, the spokesman on budgetary matters for CDU-CSU lawmakers, had said that “solid public finances are non-negotiable” for the parliamentary group.

Like Seibert, Rehberg rejected Braun’s suggestion as his “own personal opinion”, saying his group “stands firmly by the debt brake in the Basic Law.”

Official forecasts predict that Germany will return to growth in 2021 after output shrank 5.0 percent last year, but clouds are darkening as the virus has shown no signs of loosening its deadly grip on Europe.

A new round of shutdowns of restaurants and sporting and leisure facilities first imposed in November and then expanded to include schools and most shops in mid-December is now set to last until mid-February.

But with virus variants first seen in Britain and South Africa that are feared to be more contagious, Merkel’s government has warned that easing restrictions too early could lead to a rapid flare-up in infections.

Economy Minister Peter Altmaier is to present the latest growth forecasts for 2021 on Wednesday, with local media reporting that the expected 4.4 percent gain for this year may be shaved to 3.0 percent.