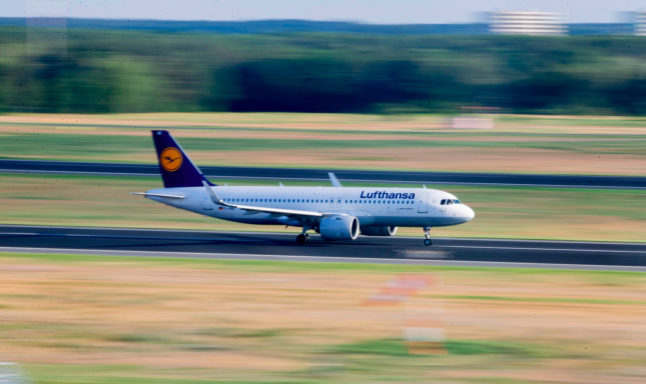 A flight leaving from Berlin in June. Photo: DPA

“That includes significantly stricter border checks, especially at the borders of high-risk areas, but also reducing air travel to Germany to almost zero, as Israel is currently doing,” he added.

Chancellor Angela Merkel, addressing a meeting of lawmakers from her conservative CDU/CSU bloc, said citizens had a right to expect that the government would take “certain precautions at border”, participants told AFP.

“Everyone understands that now is not the time to travel,” she was quoted as saying.

Tourist travel has already come to an almost complete standstill due to the restrictions imposed by the pandemic, while the business travel sector is also down, the DRV said.

“The federal government should also take note of this,” the association said. “It should therefore not now concentrate on further restricting our already severely limited freedom to travel.”

Instead, the government should remedy the “dramatic deficits” in vaccination and present sensible testing concepts, the association said.

“In addition, the federal government should urgently remember in the public debate that freedom to travel is a fundamental right – not a privilege to be granted politically.”

The emergence of new virus variants in Britain and South Africa, deemed more infectious than the original strain, has fuelled concern at a time when many nations are struggling to rein in the pandemic.

A slower than expected rollout of vaccines had added to the worries.

Although Germany coped relatively well with the first coronavirus wave last spring, it has been hit hard by a second wave in recent months.

The country renewed restrictions in November, shutting down bars, restaurants, culture and leisure facilities. Measures were tightened further in December, with schools and non-essential shops also ordered to close.

The current shutdowns are set to last until mid-February at least.

Travellers arriving in Germany from countries where the new variants have been detected are currently required to provide a recent negative test upon arrival, which has led to long queues at the German-Czech border.

READ ALSO: These are Germany's latest rules on foreign travel to deal with Covid variants

“The people in Germany who accept the tough restrictions expect us to protect them as best we can from an explosion in infection numbers,” Seehofer told Bild.

Germany has recorded over two million Covid-19 cases since the start of the pandemic and more than 52,000 deaths.