One year on: German Health Minister says pandemic is far from over but hope on the horizon

It's almost a year since the first coronavirus cases were detected in Germany. On Friday the Health Minister and scientists gave an update on the current outlook, and the hope for vaccinations.

Almost one year ago on January 27th 2020, the first case of Covid-19 became known in Germany after an employee at the Bavarian company Webasto was confirmed to have the virus. Since then, around 50,000 people in Germany have died in connection with the virus.

"Who would have thought a year ago that this would develop into such a pandemic?" asked Federal Health Minister Jens Spahn at a press conference on Friday, adding: "And it's not over yet, not at all."

Spahn urged the population in Germany to continue to stick to protective measures.

"If we stop too soon, this could turn into an even worse situation," the Health Minister said, especially in light of the mutations from the UK, South Africa and Brazil.

"The risk of such mutations forces us to change the way we deal with the virus." He said they should be treated as a new pandemic, within the current pandemic.

The numbers are still at too high a level in Germany, he said.

Spahn added that the numbers were going in the right direction but at the same time tightening restrictions was needed to bring infections down "quite a bit further". He pointed out that in other countries where restrictions were relaxed too early, "it flares up again very quickly".

'Vaccination offers a way out of pandemic'

However, Spahn considers a 'zero-covid' strategy - pushing the coronavirus numbers down to zero - unrealistic. Germany is not an island, he said. The country lies in the middle of a continent and "that's why I don't see zero as a permanent target mark as what can work in a country like Germany with our situation," he said.

"We must manage to control the pandemic again, we must be able to trace the contacts and the health system must be relieved again," Spahn said.

At the same time, Spahn also offered encouragement. "We may be at the peak of the pandemic, but we have a way out," he said. Thanks to the vaccination campaign there is the prospect of a better summer, he added.

However, Spahn acknowledged that many people are frustrated over the speed of the campaign in Germany.

"It is not happening fast enough for many people, and I would also like to have more vaccine available," said Spahn. Nevertheless, he still expects to be able to offer everyone in Germany a vaccination by summer.

The below chart gives an idea of where Germany stands in relation to other countries on amount of vaccines given out up until January 20th 2021. 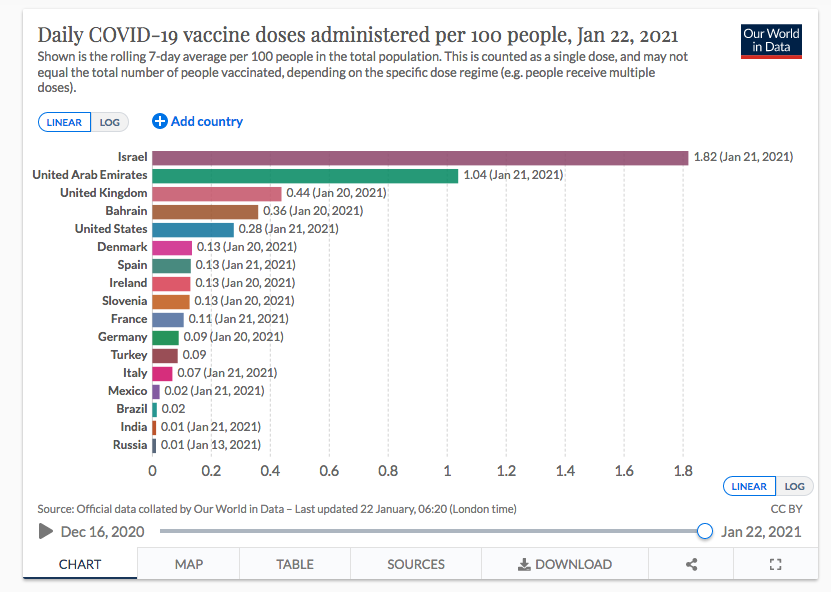 On the status of the vaccine campaign, Spahn said more than 1.5 million jabs had already been administered in Germany, of which more than 100,000 people had already received the second dose.

The head of the Robert Koch Institute (RKI) also spoke at the press conference about the need to maintain the current measures.

"The number of cases is still too high," said Lothar Wieler. "If we continue to be consistent, we will achieve success. In some federal states we are already seeing clear positive trends."

But we can only return to a halfway normal everyday life if we massively reduce the number of cases and keep them low in the long run, he added.

Nationwide, he said, there are still a lot of outbreaks in old people's and nursing homes. "We currently have about 900 outbreaks in homes," Wieler said.

"In total, more than 50,000 people have died since the beginning of the pandemic, which for me is a depressing, almost inconceivable number."

The president of the German Interdisciplinary Association for Intensive and Emergency Medicine (Divi), Gernot Marx, warned that intensive care units could collapse if the mutations spread without the second wave being under control.

"So we have to continue to drastically reduce the numbers of infections," he said. Should the mutated form of the virus continue to spread, it would lead to an "extreme strain on intensive care".

Marx said the difference it makes when people stick to the measures is evident: the Christmas holidays have not led to an increase in severe cases of infections as was feared.

There was no real "Christmas and New Year's Eve peak

in the intensive care units of hospitals," he said. This is thanks to the behaviour of the population, he added.

Action needed now for situation to improve in summer

Meanwhile, at the conference Berlin virologist Christian Drosten warned against assuming there will be a huge easing of the situation in the summer, as there was last year.

"Just because it's summer, it doesn't automatically get better," he said. "Last year we did a lockdown very early, as a result of which the virus was calmer in the summer."

However, he said, a different trend has been observed in other countries to some extent. "Even in warm countries, such as Spain, they opened and the numbers went straight back up," Drosten said. "Therefore, you should not go into the situation naively, but, rather, expect problems and be prepared for them."

The RKI reported 17,862 Covid-19 infections within 24 hours on Friday. The total number of coronavirus infections in Germany since the beginning of the pandemic has now risen to 2,106,262. The so-called seven-day incidence (number of infections per 100,000 people within seven days) was 115.3, slightly lower than the previous day, when it had been 119.0.