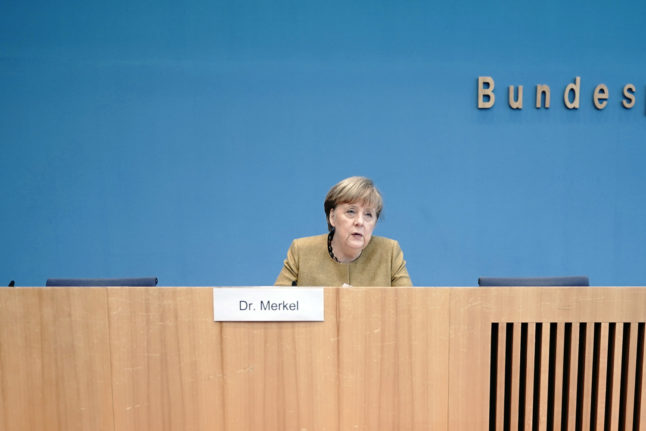 Merkel speaking at a press conference on Thursday morning.

The current picture on how well Germany is coping with the pandemic is very mixed, she said at a press conference in Berlin on Thursday.

On the one hand, new infections were finally declining, reaching their lowest level since lockdown measures were first introduced at the beginning of November.

“That shows that the hard measures that people in Germany have had to deal with for weeks are starting to pay off. And it basically shows that the effort is paying off,” Merkel said.

But at the same time, she said, the daily death toll is frighteningly high.

On Tuesday, Germany extended and tightened a shutdown in place since November 1st, also imposing measures such as mandatory wearing of surgical face masks on public transport.

READ ALSO: EXPLAINED: What you should know about Germany's stricter shutdown measures

Merkel said that the stricter measures were also put in place to stem the spread of mutated virus variants.

A mutated virus is many times more infectious than the known one, she said. One mutation, which is widespread in the UK and South Africa, has already been detected in Germany. The country also suspects that there are other variants of the mutation.

If Germany were to hold off on taking further action, a third, possibly even more violent wave of the pandemic might not be prevented, Merkel warned.

“We can still prevent it,” she said about the mutation spread in Germany. “There is still some time to prevent the danger inherent in this mutated virus.”

All additional restrictions, she said, were for the sake of precaution for the country, for the health of those living there, and also for the economy and culture.

“Everything serves the goal of getting the pandemic under control this year and eventually overcoming it,” Merkel said.

On Thursday morning, the number of Covid-19 infections per 100,000 residents in seven days (the 7-day incidence) stood at 119.0 – the lowest level since November 1st.

German health offices reported 20,398 new coronavirus infections within one day to the RKI on Thursday morning. A total of 1,013 people died from or with Covid-19 during this time period.