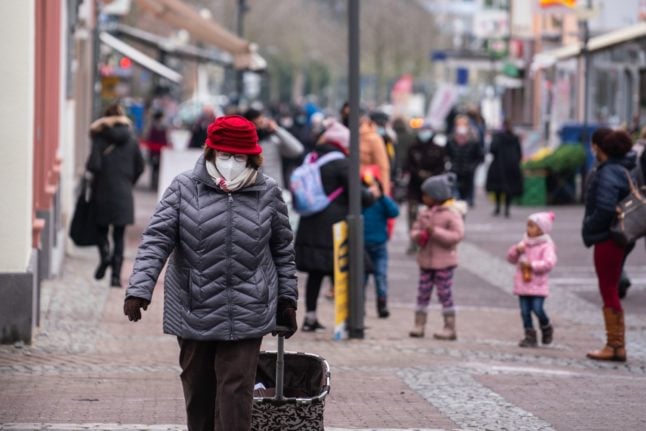 On Tuesday January 19th, Chancellor Angela Merkel and the 16 state leaders were set to discuss tightening coronavirus measures and extending them to mid-February.

Although the number of new infections is falling slightly, deaths are still high and there are concerns over more contagious Covid-19 variants. Here's the current picture.

What's the latest on the situation?

One week ago, the RKI recorded 12,802 new daily infections and 891 deaths within 24 hours. The highest number of new infections registered within 24 hours – 33,777 – was reported on December 18th, but this figure included a late report of 3,500 cases from the previous day.

This chart below by the European Centre for Disease Prevention and Control, shows the number of daily new cases in Germany on a rolling seven day average. 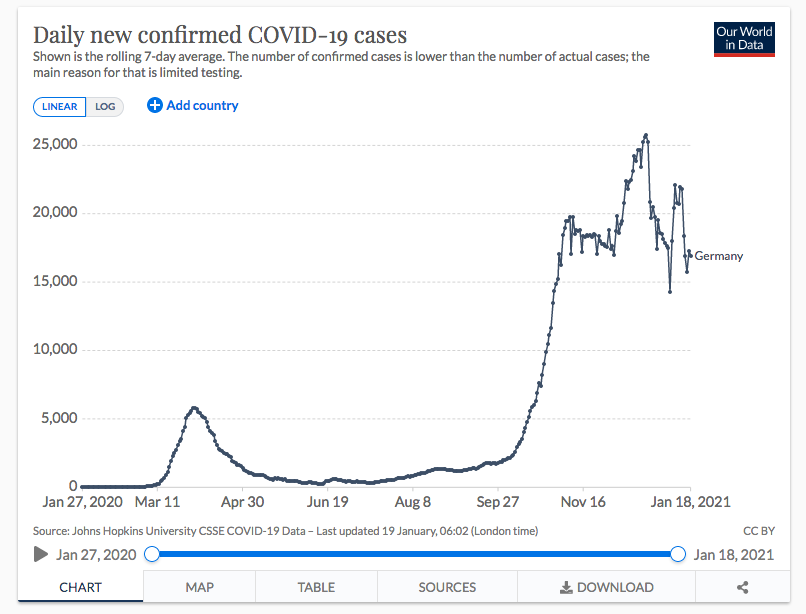 A record high of 1,244 daily deaths was reported on Thursday, January 14th.

When looking at the current figures, it should be noted that some data may be missing – on the previous day, some federal states transmitted their data incompletely or not at all.

One thing that should be noted is the spike in numbers from Christmas that experts had been warning about doesn't look like it will happen.

Compared to other countries

When it comes to comparing Germany's current Covid-19 rates to other countries in Europe and beyond, things don't appear to be too alarming (see chart below).

Germany's rate when population is taken into account has fallen in recent days whilst infection rates in neighbouring France are rising.

For a more in depth comparison between Germany and other countries in Europe, see the link below.

COMPARE: How are European countries faring in the battle against the Covid-19 pandemic? 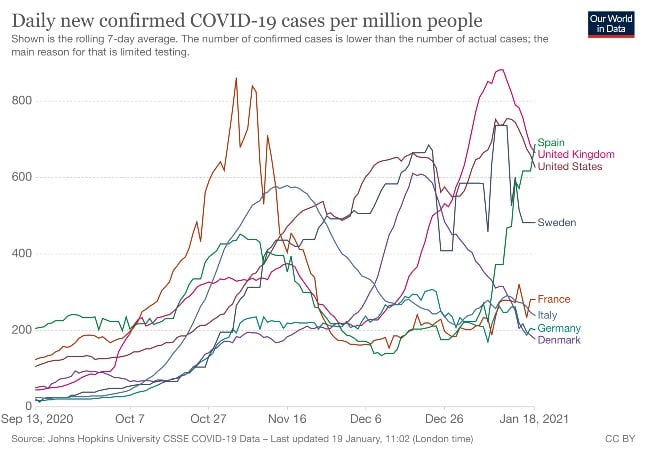 The below chart shows the daily Covid-19 deaths on a rolling seven day average.

READ ALSO: The charts and maps that explain the state of the pandemic in Germany in October 2020 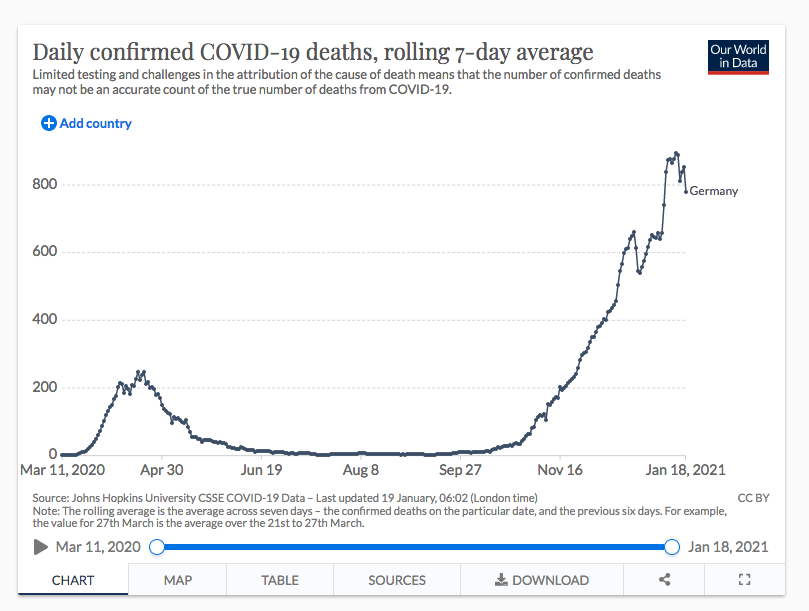 What about free ICU beds and vaccination numbers?

Just over 5,000 Covid-19 patients are currently in intensive care units in Germany.

Around 1.3 million people in the country have received their first dose of the Covid-19 vaccine. Around 6,000 people have also received the second injection.

After the second jab, it usually takes a further week before the patient has protection from the virus.

Mecklenburg-Western Pomerania remains the leader in vaccinations with a vaccination rate of 2.34 percent, ahead of Schleswig-Holstein with 1.92 percent. Bringing up the rear is Baden-Württemberg with a rate of 0.90 percent, behind Thuringia with 1.03 percent.

READ ALSO: Will the rest of Germany follow Bavaria's lead in tightening measures?

What are the other trends?

According to the RKI, the number of new infections reported within seven days per 100,000 inhabitants (seven-day incidence) was 131.5 on Tuesday morning, having reached its previous high of 197.6 on December 22nd.

The number fluctuated thereafter, but has been falling for several days. However, the differences between the federal states are currently enormous: the highest incidences are in Thuringia with 256.3 and Saxony with 225.7.

The lowest value is in Bremen with 83.2.

The RKI map below shows the districts with the highest incidence rates across Germany as of January 18th. The highest numbers remain in eastern states. 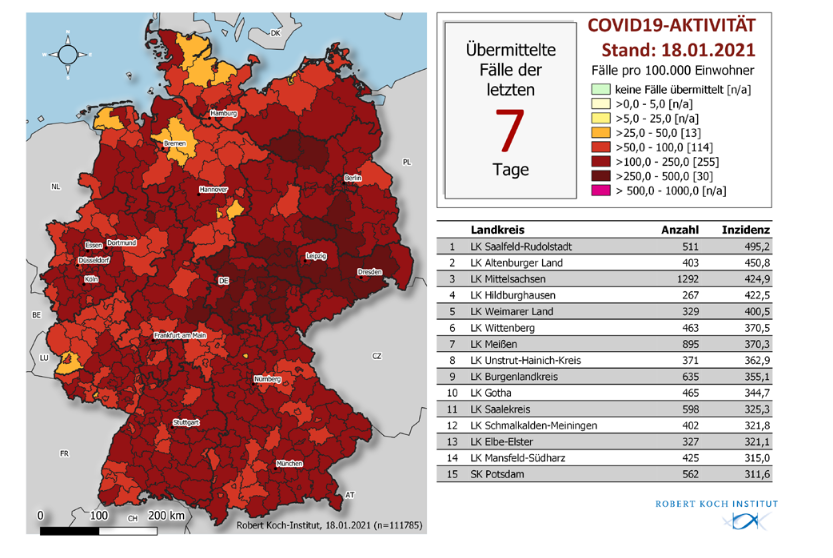 Authorities have repeatedly said they are aiming to get down to 50 new infections per 100,000 residents in seven days.

The tweet below shows that the seven day incidence for Germany on Tuesday was 131.5, and this number has fallen for the eighth day in a row.

It also says the incidence has only increased in four of 16 federal states, but with an incidence of 225.4, the state of Brandenburg, which surrounds Berlin, has now reached Saxony's level (225.7).

This means that 100 infected people in theory go on to infect 89 more people. The value represents the number of infections eight to 16 days ago. If it is below 1 for a longer period of time, the incidence of infection is decreasing.

The below RKI chart shows a representation of the Covid-19 cases per 100,000 inhabitants over seven days in Germany by federal state and respective reporting date.

German leaders do not thing the case numbers are decreasing quickly enough, plus they are worried about more contagious coronavirus mutations spreading in Germany.

The federal and state governments are therefore discuss an extension and possible tightening of the current Covid protection measures. They are due to expire on January 31st.

While a continuation of the lockdown into February is considered certain, additional measures are to be discussed.

The map below shows how the governmental response has changed over time and the Government Stringency Index – a composite measure of the strictness of policy responses.

In this map we compare the German government response with France, the UK, Austria, Switzerland and Sweden. 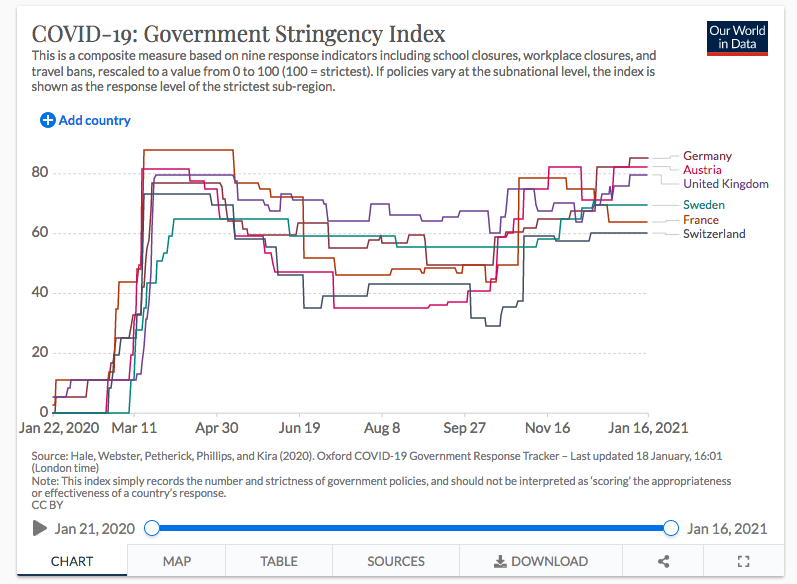 The topics being considered are how to get more people working from home and how to ensure public transport is less busy. Curfews and tighter mask restrictions will also be discussed.

In the run-up to the meeting, several scientists and politicians spoke out in favour of tighter measures.