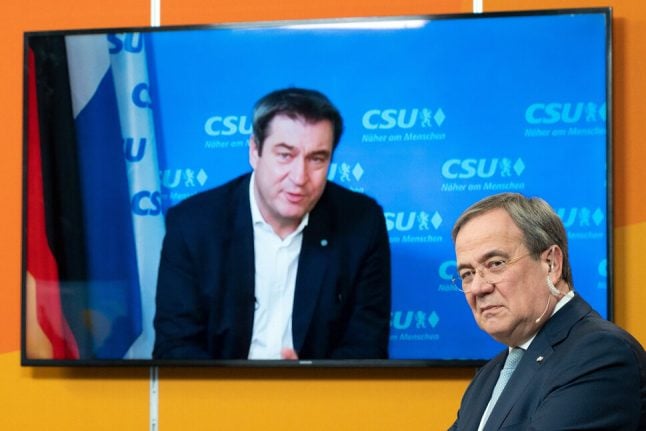 Armin Laschet with Markus Söder in the background. Photo: DPA

Merkel ally Laschet was elected as head of the Christian Democratic Union on Saturday in a run-off against right-winger Friedrich Merz, nine months ahead of a general election that will mark the end of the chancellor's 16-year reign.

The head of the CDU would normally lead the party and its Bavarian sister party, the CSU, to the polls as their chancellor candidate in a general election.

But Laschet's poor standing in national polls has prompted speculation that someone other than the CDU leader could be a better choice to lead the conservatives into the election race.

READ MORE: Who is the new head of Germany's CDU?

In the run-up to the September 26 vote, with the coronavirus pandemic still wreaking havoc in Europe's top economy and around the world, it will not only be Laschet whose every move is under close scrutiny.

Two other men, CSU leader Markus Soeder and Health Minister Jens Spahn, could also be in the running to be the conservative “chancellor candidate”.

Bavarian state premier Soeder, who has impressed with his tough line on the coronavirus pandemic, is currently streets ahead in polls of who Germans would like to see as their next chancellor.

Once known as a staunch conservative and a vocal opponent of Merkel's liberal migration policies, Soeder has reinvented himself in recent years as a man of the people with an environmentalist streak.

After 1.75 million people in Bavaria signed a “save the bees” petition in 2019, Soeder announced that drastic changes in farming practises would simply be written into law rather than taking the additional step of a referendum — a move seen at that time as a bid to woo environmentally conscious voters.

Amid the raging coronavirus pandemic, the 54-year-old former journalist has repeatedly struck out alone to introduce tough anti-virus measures in the southern German state, an approach that has “given him the aura of a saviour”, according to Der Spiegel weekly.

Long a defender of traditional Christian values, Soeder is also known for being PR-savvy and chose the day before the CDU leadership vote to tweet a cute photo of his new puppy Molly.

Germany has never before had a CSU chancellor, though the conservative alliance has not ruled out fielding a CSU candidate this time and has done so twice before — albeit unsuccessfully.

But accepting the chancellor candidate job could be a “risky” path for Soeder, according to Ursula Muench, a political scientist at Munich's Bundeswehr University.

“It is interesting that Soeder is considered capable of becoming chancellor. But he has no federal political experience and no reliable network in Berlin,” Muench told AFP.

Not so for Spahn, who has been firmly ensconced in the Bundestag as Merkel's health minister for the past three years.

At just 40 years old the youngest potential candidate, ambitious and openly gay Spahn is considered more right-wing than Merkel despite his liberalism on some social issues.

Spahn ran for the leadership of the CDU in 2018 after Merkel stood down, but was eliminated in the first round.

Chastened by his poor performance, he decided not to run again this time, instead throwing his support behind Laschet.

But he has hardly been gushing in his praise for Laschet and has reportedly been sounding out his own chances as chancellor candidate behind the scenes.

Spahn is likely to be closely involved in picking the chancellor candidate “but it is unlikely that he himself will join the ranks of candidates”, according to Nils Diederich, a professor of political science at the Free University of Berlin.

He may also suffer from increasing criticism over his management of Germany's vaccination campaign, which has been beset by delays and controversy.

Don't write him off

But whatever happens in the coming weeks, observers say Laschet should not be written off either.

Despite a series of gaffes that had left him trailing in the polls, Laschet came back from behind to triumph in the CDU leadership race.

The affable 59-year-old political moderate with a reputation for pragmatism has an uncanny ability to “sit out his opponents”, Der Spiegel weekly noted on Saturday.

“He does not aim for a quick knockout, but wears down his opponents slowly, continuously, with great endurance,” Der Spiegel wrote.

Germans may yet be won over by his promises to continue Merkel's moderate course “after a world pandemic, after a President Trump, after a hectic, nervous, sometimes crazy time”, Der Spiegel noted.

“This could be Armin Laschet's year,” it said.