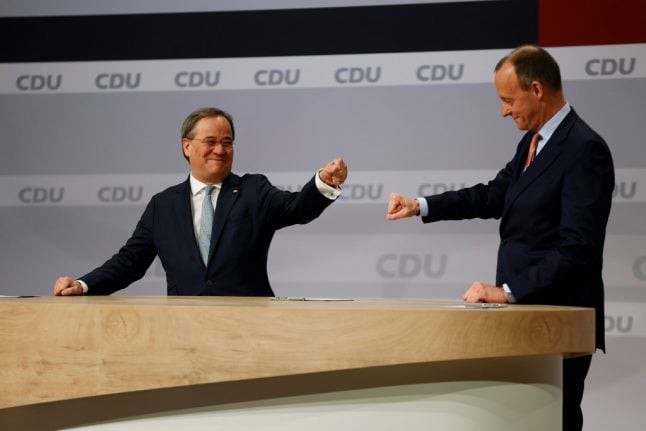 Newly appointed leader of the CDU (L) is congratulated by CDU politician and candidate Friedrich Merz following his election on January 16, 2021: AFP

Armin Laschet, the new head of Germany's conservative CDU party, is a sworn European and defender of multiculturalism who has promised to continue the centrist course of Chancellor Angela Merkel.

The affable 59-year-old was elected as head of the CDU on Saturday, beating corporate lawyer Friedrich Merz and foreign affairs expert Norbert Roettgen.

The CDU chairman traditionally leads the party and its CSU Bavarian sister party to the polls, meaning Laschet is in with a fighting chance of becoming Germany's next chancellor.

A soft-spoken political moderate with a reputation for pragmatism, Laschet is currently the leader of Germany's most populous state of North Rhine-Westphalia.

He is a sworn Merkel loyalist who famously stuck by the chancellor in 2015, when Germany left its borders open to hundreds of thousands of migrants from Syria and other hotspots.

If anything, he is seen as even more pro-migration than Merkel, celebrating diversity as a economic and social boon to his state.

During his campaign to head the CDU, he positioned himself as the Merkel continuity candidate, telling Stern magazine that “a break with Angela Merkel would send exactly the wrong signal”.

Laschet emerged as an early favourite when the race to head the party was thrown open last year after the surprise resignation of Annegret Kramp-Karrenbauer.

But his path to the top was anything but smooth, with critics accusing him of flip-flopping and poor leadership over his handling of the pandemic in North Rhine-Westphalia.

In the spring, Laschet pushed aggressively for the loosening of restrictions to curb the spread of the coronavirus — only to backtrack after a huge outbreak at a slaughterhouse.

He also sparked a row when he appeared to blame eastern Europeans for importing new coronavirus cases to Germany.

While he has been praised for his ability to unify, he is also seen as “indecisive, sometimes acting impulsively”, according to the daily Sueddeutsche Zeitung.

But Laschet was boosted by a strong performance for the CDU in local elections in North Rhine-Westphalia in September, hailing the result as an endorsement of the party's “moderate course”.

In a recent interview with the Bild daily, he highlighted his experience as a state premier as a reason for CDU delegates to vote for him.

“It also doesn't hurt to have won an election before. And it is important to be able to bring people together,” he said.

CDU members may also have been swayed by Laschet's alliance with Health Minister Jens Spahn, whose efforts to steer Germany through the pandemic have made him a favourite with the public.

The pair wrote a joint article for Der Spiegel weekly promising to make the CDU “one of the most modern parties in Europe” and stressing that leadership “does not mean a one-man show”.

In what appeared to be an endorsement for Laschet, Merkel on the eve of the vote called for a moderate leader for the party and said she wished for a “team” to be elected.

Laschet was born in Aachen, the spa city in western Germany near the border with Belgium and the Netherlands.

He is a great fan of Charlemagne, the king of the Franks credited with uniting Europe whose empire was based in Aachen. His family has even claimed they are direct descendants.

But playing up his everyday man image, Laschet underlined in a speech before the vote that his father worked in a mine and taught him that “when you're down in the mine, it doesn't matter where your colleague comes from, what his religion is or what he looks like. What is important is, can you rely on him.”

His wife is of French-speaking Wallonian origin and he speaks fluent French. The pair have three children.

Laschet studied law and political science in Munich and Bonn before working as a journalist for Bavarian radio stations and television, and as the editor of a Catholic newspaper.

The self-described “passionate European” was elected to the Bundestag in 1994 and to the European Parliament in 1999.

READ ALSO: Life after Merkel: Is Germany ready to think about what's next?