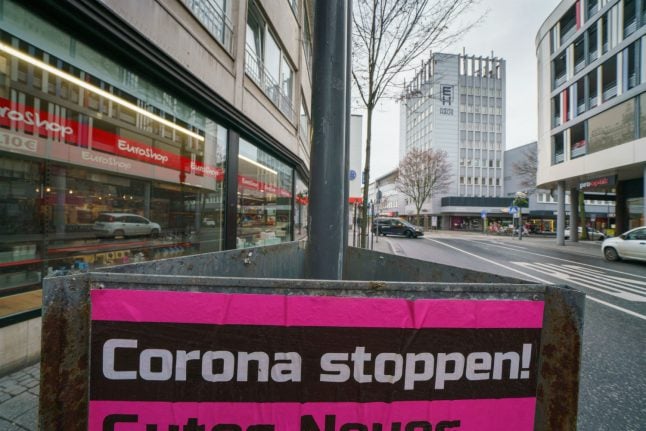 A sign in Hanau appeals to passersby to 'stop corona'. Photo: DPA

In order to stem high coronavirus infection figures, Germany's 16 state premiers, together with Chancellor Angela Merkel (CDU), decided to tighten and extend Germany's shutdown until the end of January.

Here's an overview the new measures, and how individual states are implementing them differently (or not at all).

The new regulations apply in Hamburg from Friday January 8th, and in Berlin, Lower Saxony, Mecklenburg-Western Pomerania and Thuringia from Sunday January 10th.

One person is allowed to meet with another household. Children are also usually not considered an exception, as they were under Germany's latest extended shutdown, in place since December 16th.

However, the states of Saxony, Bremen and Baden-Württemberg have decided to exempt themselves from the rule, allowing up to two households of five people not including children up to the age of 14 to meet. Infants are also exempt from the rule in Bavaria.

Bavaria and Baden-Württemberg both want to allow two families to come together to look after children. Schleswig-Holstein is also making an exception for the care of children and relatives in need of care.

Lower Saxony also decided to deviate from the rule, saying it does not apply to children with disabilities and children of separated parents.

Schools and daycare centre (Kitas) will in general stay closed. However, parents will be allowed paid leave for childcare during the shutdown. Emergency care and distance learning for school children will also be available.

READ ALSO: How parents in Germany can take paid time off to care for their children during lockdown

In Rhineland-Palatinate and Hesse, however, schools are to remain open, but grades 1 through 6 are not required to attend classes. Hamburg students who are not able to learn at home – for example because their parents are working outside of the home and unable to supervise them – may also continue to attend school.

In Berlin, face-to-face and alternating classes (ie. part of the student body is there one day and the other on the next) will start on Monday.

Bremen is suspending its compulsory school requirement and letting parents decide for themselves whether to send their children to school. In Mecklenburg-Western Pomerania, Kitas and schools are to remain open through the 6th grade, unless parents can care for their children at home. Graduating classes are to be allowed to return to school starting Monday.

In districts with more than 200 new infections per 100,000 inhabitants within a week, people are not allowed to travel more than 15 kilometre from their place of residence without a valid reason, for example a doctor’s appointment or travelling to work.

However Baden-Württemberg and North-Rhine Westphalia are not planning to follow the rule.

In Thuringia and Lower Saxony, local authorities are still debating whether they will enforce the rule or not.

If you live within a hotspot and want to see how far you're able to travel (and if the rule applies to your particular area) the following interactive calculator has been set up.