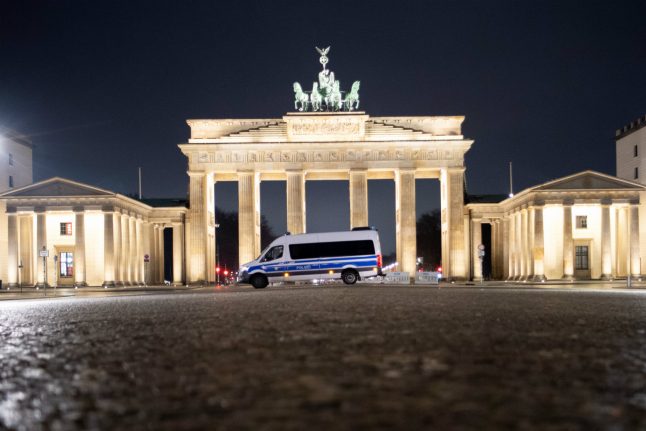 A police van at Brandenburg Gate on the morning of January 7th. Photo: PDA

Germany is extending and tightening measures to slow the spread of Covid-19. Chancellor Angela Merkel and state leaders decided on tougher contact restrictions and a movement restriction rule for hard-hit areas as they extended the lockdown until January 31st.

However, plenty state differences are already emerging. Here's a look at what we can expect in Berlin.

Schools to open for many pupils in January

Merkel and state leaders agreed that schools and daycare centres (Kitas) would remain closed until the end of January, but said the aim was to reopen them as soon as possible education is a priority.

However, some regions are reopening classrooms earlier, including the capital.

The Berlin Senate agreed on a timetable for the gradual reopening of schools from January 11th.

From this date, year groups currently preparing for qualifications – such as Abitur, MSA or vocational school-leaving certificate – will be taught in reduced class sizes, said mayor Michael Müller.

Primary school pupils in grades one to three will return to the classroom part-time from January 18th.

The aim is to ensure that each pupil has at least three hours of face-to-face teaching per day, said Klaus Lederer,  Senator for Cultural Affairs (Left party).

Fourth to sixth graders will return part-time from January 25th. Until then they will receive classes online.

All other classes can expect alternating lessons with periods at school and at home from February 8th. The winter holidays in the first week of February will remain in place.

For those attending school, there is obligation to wear a face mask from fifth grade onwards during lessons.

Daycare centres will remain closed for the time being but will offer emergency care.

Contact restrictions to combat the pandemic are being tightened across Germany, including in Berlin.

From January 11th, private gatherings will only be permitted among members of your own household and with a maximum of one other person not living in the household.

Up to this point, meetings between two households with up to five people were allowed, and children were excluded from the rule.

Children are no longer exempt from the contact rules. In Berlin there's this exception: If a person is a single parent, their children (under 12) are not counted in the rule.

It means a single parent could bring their child or children (under 14) to meet another household.

Berlin also adopts the one household plus one extra person rule but with an exception for single parents, who can also bring kids aged up to 12. https://t.co/uhCM4Qh0IB

Berlin mayor Müller (SPD) made an urgent appeal to Berliners while announcing the new rules. “We must do everything we can to avoid contact,” he said on Wednesday.

“I see the situation on the streets with concern. In March and April we experienced complete silence. People took the stay home principle seriously. Now we have a lot of life in the city despite the restrictions,” said Müller.

“That's why it's crucial to stay home and avoid contacts – like in March and April, when we were successful with that.”

Müller told Berliners to brace themselves for the restrictions.

“These are three tough weeks ahead,” Müller said after the Senate meeting.

The federal and state governments agreed that in areas that clock up more than 200 new Covid-19 infection per 100,000 residents, residents will face movement restrictions.

Residents will not be able to travel more than 15 km from their place of residence – their city or town. The aim is to stop people from travelling or going on day trips.

This measure was discussed at length in Berlin.

Berlin is to be treated as a whole (rather than carved up into districts). However, the city's seven day incidence rate is well below the 200 mark (around 130) so it currently would not be affected by the restriction.

So what happens if it rises above this limit?

Officials are to discuss if the rule will be brought in. Berlin will liaise with neighbouring state Brandenburg on how to deal with the situation.

Currently Potsdam in Brandenburg has a very high incidence of 228.5.

People have been urged not to go on day trips at all even when the rule is not in place.

Under the new rules, driving schools and services must be closed until at least January 31st.

Work canteens also have to close seating areas. However, they can offer takeaway food.

It came as Berlin hospitals continued to struggle. Müller said the situation at the Charité Hospital was very serious.

The capacity of available beds for the treatment of Covid-19 patients will be “exhausted in the next few days” partly because there are not enough specialist staff. “With this, one is now reaching limits,” he said.

Effects of Christmas and New Year

Culture Senator Lederer reminded the public that the effects of the holidays would not be known until around January 16th.

Lederer also slammed employers for not offering their staff the chance to work from home.

The government and states have “strongly encouraged” employers across Germany to make this option available.

Too many people who don't work in key areas, such as hospitals or in refuse collection, still travel to work every day, he said.

Lederer added that it would be a tough time but he said he hoped the situation would have improved by Easter.

The Senate will discuss measures again on January 19th.

Please be aware that the situation can change rapidly. Check your local government site for more details.