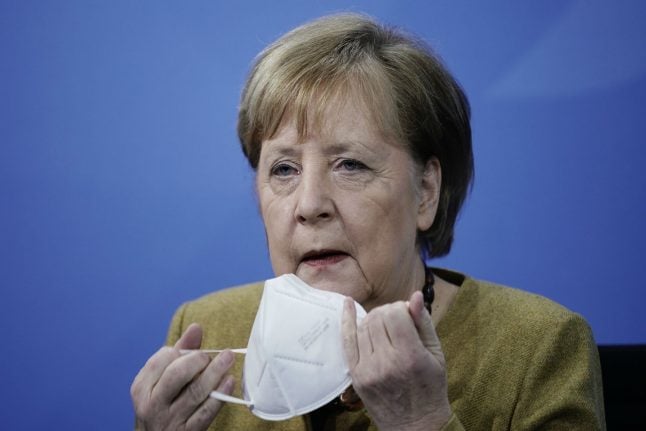 Schools, leisure and sporting facilities and most shops will remain shut through until January 31st, Chancellor Angela Merkel said after talks with leaders of Germany's 16 states.

And people will be allowed to meet up with only one other individual from another household under the new rules, instead of five people previously.

Those residing in districts where new infections are above 200 per 100,000 people over the last seven days will be banned from travelling beyond a 15-kilometre radius of the zones.

“The measures are drastic, they are tougher. But we feel compelled not to lose sight of our goal,” Merkel said on Tuesday evening.

The chancellor acknowledged that the restrictions would be difficult, particularly for working parents who would have to juggle weeks of homeschooling children.

But said it was important to get back to the point where infection chains could be traced, which is considered to be a rate of less than 50 coronavirus cases per 100,000 residents within a seven day period.

Most states have far exceeded this rate, with the lowest being the northernmost state of Schleswig-Holstein (75.8) and the highest Saxony (358.4).

“The winter … is the time when the pandemic can have the worst impact, and with the combination of the mutated virus… it is absolutely necessary” to return to a level of infections that is low enough for officials to carry out their trace and isolate strategy, said Merkel.

With the focus on the mutated strains, Germany's regional states agreed to ramp up quarantine checks on arrivals from affected areas.

Arrivals from risk areas outside Germany will be subject to a test before their entry into the country, in addition to the current requirement to go into self-isolation that can only be ended by a negative test five days after arrival.

After Germany's daily deaths surpassed the 1,000-mark for the first time on December 30th, pressure has escalated to slow the spread of the disease which has claimed more than 35,000 lives.

In a New Year's Eve televised address, Merkel had already warned Germans of a hard winter, stressing “the challenges that the pandemic poses remain immense”.

Germany, the EU's most populous country, fared better than most neighbours during the first wave of the pandemic and its death toll is still lower than countries such as Italy, France or Spain.

But epidemiologists say complacency about that relative success and an unwillingness to implement the toughest measures likely contributed to an exponential spread of the virus in the autumn.

The country began a vaccination drive on December 26th, around 317,000 people have received the first of two jabs.

But German media and even the Social Democrats (SPD), junior partners in Merkel's right-left government, have slammed what they call a slow rollout, accusing the government of relying too much on a joint action with the European Union.

At the start of an election year, SPD leaders have demanded answers from Health Minister Jens Spahn why “the European Commission ordered so few vaccines” and “Germany did not order the doses unclaimed in the EU”.

A poll from Civey institute found 44 percent of Germans were unconvinced by the government inoculation strategy, while around 40 percent were “highly confident” it was the right approach.

Defending Spahn, Merkel said he had taken the “right action” in various areas surrounding vaccine procurement and administration, be it on the legal or production front.

“I can only be glad that the health minister is so active,” she said.

Merkel's spokesman insisted the European way was in the German interest, adding that the latest vaccination numbers “give us great hope”.

Merkel and the regional leaders will hold fresh talks on January 25th to take stock and decide if the curbs have to be maintained beyond February 1st.

On Tuesday Germany reported 11,897 new coronavirus infections within a day. And 944 people died within the same time period.