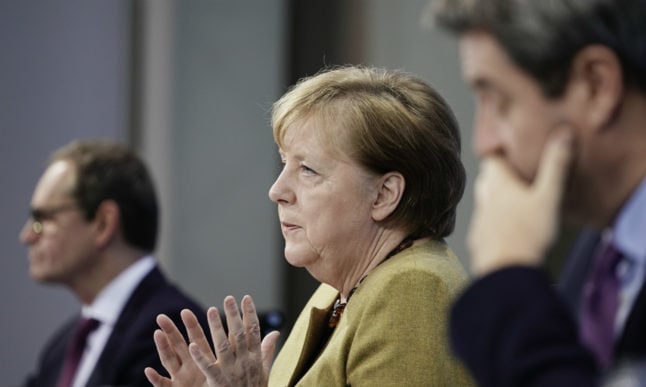 Here's a summary of what Chancellor Angela Merkel and the leaders of Germany's 16 states agreed after a meeting on Tuesday January 5th.

The existing restrictions remain in place and are to be extended until at least January 31st. The rules were due to expire on January 10th.

This means schools and non-essential shops will remain closed, along with restaurants and bars in addition to the leisure and cultural sectors. Takeaway food is allowed but drinking alcohol is banned in public.

The Chancellor and state leaders urge people in Germany “to keep all contacts to the absolute minimum during the next three weeks and to stay at home as much as possible”.

Contact restrictions to combat the coronavirus pandemic are being tightened in Germany. From January 11th, private gatherings will only be permitted among members of your own household and with a maximum of one other person not living in the household.

Up to this point, meetings between two households with up to five people were allowed, and children under 14 were excluded from the rule.

There is no mention of exceptions for children in the new rules. This means that two families will no longer be allowed to meet. Instead one person could visit or meet a family/household.

However, there is an exception in the state of Berlin (and there may be in other states): children of single parents are not counted in the rule. So the parent and their child or children can meet with another household.

People living in districts with very high Covid infection rates will have their freedom of movement drastically restricted.

For districts with a 7-day incidence of more than 200 new infections per 100,000 residents, the radius of movement is to be restricted to a 15 km radius around the place you live, unless there is a valid reason to travel further.

Exceptions can include trips for work or medical appointments.

“Shopping, travelling and day-trips explicitly do not constitute a valid reason,” the government and states say.

Chancellor Merkel had been pushing for this order to come into force in regions with an incidence rate of 100 infections per 100,000 people in seven days. If Merkel had got her way, this rule would have applied to most of the country, effectively bringing travel to a complete standstill.

The government and states have asked for employers to “create generous home-office options” in order to implement the 'we stay at home' message nationwide.

Although schools and daycare centres (Kitas) remain closed, officials say they want to reopen them as soon as possible.

The government and states “agree that schools must be involved from the outset” in any relaxation of the measures to ensure safety.

A step-by-step plan presented by the Ministers of Education and Cultural Affairs is to help with the reopening. This plan foresees – if the situation improves – alternate distance and classroom teaching for years one to six as of February.

Parents to receive extra days to care for children

Parents will be allowed to take twice as much paid leave to care for children as usual this year.

Merkel and the state premiers agreed to increase the so-called children's sick pay (Kinderkrankentagegeld) per parent from 10 to 20 days because of the pandemic. Single parents can receive 40 days instead of 20.

The entitlement applies to cases when care of the child at home becomes necessary because the school or Kindergarten is closed due to the pandemic, or because compulsory attendance has been suspended.

The restriction measures are to accompanied by extensive federal and state financial aid programmes.

People coming from risk areas to Germany from January 11th will have to do a coronavirus test on entry as soon as they arrive in the country, or 48 hours before arriving. That's in addition to the mandatory 10-day quarantine. The quarantine can be ended with a negative test taken on the fifth day at the earliest.

The government and states call this the “two-test strategy”.

“The Federal Government and the states once again expressly point out that travel to risk areas without a valid reason must be avoided at all costs,” the paper also says.

The government also says it reserves the right to introduce additional testing obligations for countries where the risk of infection is particularly high due to the spread of mutations of the virus or high numbers of infections.

In December Germany introduced temporary travel bans for people coming from the UK and South Africa due to new virus variants.

Around 150 of the approximately 200 countries worldwide are classed as 'coronavirus risk zones' and people in Germany are warned against travelling there.

Task force to support the elderly

Special protective measures are to be put in place to support elderly people in care homes until the vaccinations have been completed.

That will take the form of a new task force with volunteers, which will be set up to help with regular testing of care home residents, staff and visitors in regions with high infection rates.

The Robert Koch Institute is to examine and report back on new mutations of the virus, how they affect people and what the risks are.

The Health Ministry also wants to step up the tracking of the new virus variant that originated in the UK.

The government plans to provide states with detailed information on when they can expect new supplies of the vaccine. The aim is for residents of nursing homes to be vaccinated by the end of January.

As with all the Covid rules in Germany, there are differences among states so keep an eye out on your local rules.

Meeting due later in January

The Chancellor and state leaders will meet again to discuss the situation on January 25th. They will then decide on what measures or relaxations can take place from February 1st.