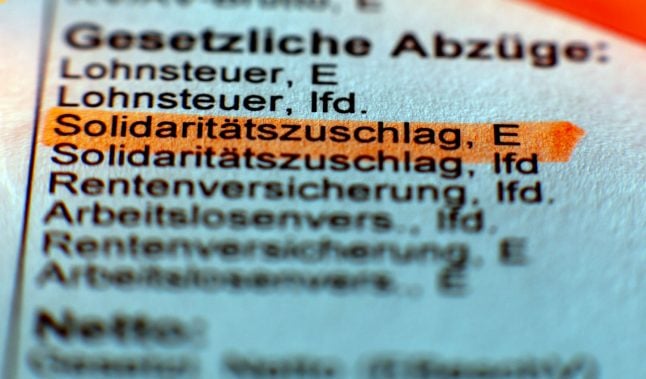 Most taxpayers will benefit from the new cut in 'solidary tax'. Photo: DPA

The solidarity charge, known as the 'Soli' was introduced as a special charge in 1991 mainly to support infrastructure and projects in eastern Germany after reunification in 1990.

The charge levied an additional 5.5 percent income tax, or corporation tax, after a certain level of earnings.

You will have seen the deduction on your payslip under Solidaritätszuschlag (solidarity surcharge).

At the start of January 2021, the Soli was abolished for around 90 percent of taxpayers, and a further 6.5 percent now pay less.

As a result, about 96.5 percent of those paying taxes are now financially better off.

“This is one of the biggest tax cuts in our history,” said the German government.

Taxpayers with a small to medium-sized incomes will benefit in particular from the changes.

Parents of two children or more will only pay it if they earn a combined amount of around €151,000. Single people meanwhile will have to earn over about €61,700 to still face Soli payments.

In other words, around 90 percent of the employed will no longer pay the tax.

However, those who earn more than €6,004 a month gross pay as a single person will still have to pay – albeit less than the current 5.5 per cent of their wage.

Those who earn €9,000 or more gross income per month will still have to pay the maximum rate of 5.5 percent.

According to the Federal Ministry of Finance, this affects 3.5 percent of taxpayers.

What will you save?

It depends on your situation. A single person in western Germany with an annual gross income of €35,000, for example, could save around €251 a year without the solidarity tax.

Even those who still have to pay, a partial charge can save several hundred euros.

In total, the government is expected to lose out on around €10.9 billion less from 2021 onwards.

The government has launched a solidarity surcharge calculator so you can find out how much your tax savings will be for 2021.

What about low income families or others?

People who earn very little won't make much savings because they currently do not pay a lot in Soli contributions, or they are already exempt.

Therefore, the new tax cut will have no or a comparatively smaller effect for them.

However, there will also be a noticeable improvement in disposable income for these income groups, as child benefit has increased, plus  there is extra support for single parents.

We'll write about more tax changes in the coming days on The Local Germany.

READ ALSO: What changes for families in Germany in 2021?

How much did the Soli bring in?

For comparison, income tax accounted for 27.5 percent of the total, raking in €219.7 billion.

Why is Germany phasing out the solidarity surcharge?

The massive reduction is possible because of the progress that's been made since German reunification, Finance Minister Olaf Scholz has said.

However, the special economic aid for the east has been controversial ever since it was launched.

It's not on the cards to completely abolish it just yet but some politicians have been pushing for it, especially the pro-business Free Democrats (FDP).