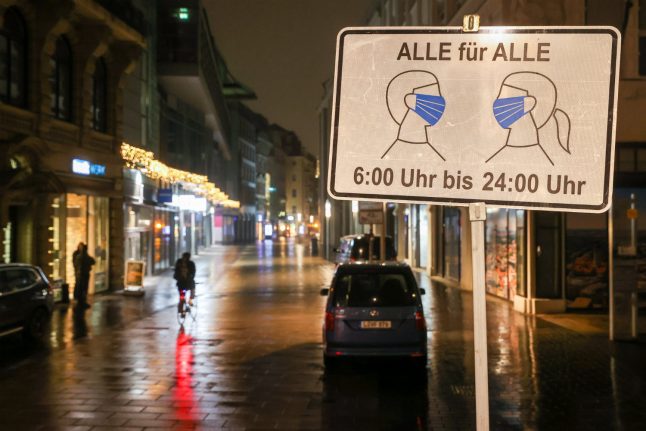 We are just a few days into 2021, but the coronavirus situation in Germany is still severe. And there are calls for the current lockdown measures, which are due to expire on January 10th, to be extended until the end of the month – or even longer.

However, due to reduced testing and delayed reports from health offices at the weekend and over the turn of the year, these figures are expected to rise.

The nationwide average of the so-called seven-day incidence (the number of infections per 100,000 residents in seven days) was 139.4 on Monday morning.

Germany has been aiming for a seven-day incidence rate of 50 which would allow authorities to keep on top of contact tracing.

So what is January looking like for people in Germany?

It seems certain that the lockdown measures, which have seen the closure of non-essential shops, schools and kindergartens throughout December, will be extended in some form.

Leisure and cultural facilities, along with restaurants, bars and cafes, have also been closed (except for takeaway food and drink) since the beginning of November as part of the so-called 'lockdown light' introduced then.

According to German media reports, state premiers agreed during a conference call on Saturday that the current Covid-19 restrictions should be extended.

But there are different views on how long it should go on for, if rules should be tougher, and what will happen to schools and daycare centres.

The states that have been hardest hit, including Bavaria, Saxony, Thuringia and Baden-Württemberg, are arguing to prolong the measures for three weeks until January 31st.

“The lockdown must be extended until the end of January,” Bavarian State Premier Markus Söder said.

“Premature easing would set us far back again. It's only in mid-January that we'll really know how Christmas and New Year's Eve have affected the infection figures. We must remain consistent and not give up too soon again.”

In response to a question about a possible extension after the end of the month, Söder said: “There can never be any guarantees about how things will continue.”

Söder's call came ahead of the meeting between the 16 state premiers and Chancellor Angela Merkel on January 5th to discuss the situation and how to move forward.

According to DPA, however, there are different demands.

Thuringia state premier Bodo Ramelow wants to tighten the lockdown in his state in view of the high infection levels.

He proposed stricter travel measures that would mean people couldn't go more than 15km from their home.

States which are not so affected are leaning towards a shorter two-week extension, before reviewing the situation.

What about schools and nurseries?

The issue of schools reopening to pupils is also a sticking point.

He expects information from the federal government “on what scientific basis or data basis” there is for a blanket closure of Kitas and schools, and how doing that maintains the “essential functions of basic services and medical treatment capacities”.

Education ministers were set to discuss the situation on Monday, a day before the meeting. Above all, German authorities consider the opening of daycare centres and primary schools to be a priority, ahead of, for example, restaurants.

However, Söder warned against a “hasty opening of schools and daycare centres”.

“In view of the high infection figures, it would be irresponsible to simply send teachers and pupils back to school completely,” he said.

Particularly after the holidays, the danger of infection is high, he added.

Ramelow said that in Thuringia, limited regular operation of schools and Kindergartens was not planned again until February 1st.

In the conference call, states with high numbers of cases argued for keeping schools closed for the time being, while states with lower numbers want an earlier opening with alternate or distance teaching of higher classes.

What are other experts saying?

The president of the World Medical Association, Frank Ulrich Montgomery, also pleaded for an extension of the current restrictions.

The federal and state governments should add around four weeks on, he told the Rheinische Post. That would extend the restrictions until around February 2nd. “And I am not at all sure that that is the end of it,” Montgomery said.

But he said the measures do not yet go far enough, particularly due to the threat of the new virus variant.

Currently people in Germany have only been urged to stay at home and avoid travel, although in very hard-hit areas like Saxony and Bavaria, curfews are in place.

“We have to reduce new infections more significantly than planned so far,” Lauterbach told the Passauer Neue Presse on Monday.

“An incidence value of 50 is not sufficient because in the future we will probably have to deal with a virus variant that is much more infectious than the one that has been widespread in Germany so far.”

The rate of new infections per 100,000 inhabitants in seven days must be reduced to 25, he said.

“The lockdown needs to continue – and should not be time limited – but should be directed towards the target value of 25,” Lauterbach said.