It's rush hour on a grey morning in the German capital and a stream of cyclists are gliding along Friedrichstraße, the fabled shopping street that runs through the city centre.

“Move!” one of them yells after illegally mounting the pavement and charging at a defenceless pedestrian.

Bernd Lechner, a 40-year-old insurance clerk, manages to dodge the speeding bike just in time, but he's had enough of the “increasingly aggressive” attitude of cyclists in the German capital.

“It's getting worse and worse. I'm starting to become more scared of bicycles than of cars,” he said.

Berlin has long been known as a bike-friendly city, but a sharp rise in the number of cyclists during the coronavirus pandemic has been causing tensions on the road.

The number of Berliners cycling to work or to go shopping has increased by some 25 percent since the start of the pandemic, according to city authorities.

All good news for fitness, air quality and public health, since it reduces the number of people using public transport during the fight against Covid-19.

But at the same time, police have registered a sharp rise in the number of offences committed by cyclists and a surge in complaints about them from pedestrians, according to Berlin police chief Barbara Slowik.

In an interview with the Berliner Morgenpost newspaper in October, Slowik even proposed compulsory registration for cyclists to make it easier for the authorities to identify those who break the rules.

“More than 50 percent of all traffic accidents involving cyclists are caused by the cyclists themselves,” she said.

And some are paying with their lives: 17 cyclists have been killed in traffic accidents in Berlin this year, 11 more than in 2019.

But the idea of compulsory registration is unlikely to become reality because of the “immense bureaucracy” it would entail, Ragnhild Soerensen of Changing Cities, an NGO that lobbies for sustainable transport, told AFP.

Berlin has about 3 million bicycles, compared with only 1.1 million registered cars, she points out.

But the police chief's comments have ignited a fierce debate on the behaviour of cyclists in the city.

“We are being pushed around, insulted. Many people think they are better people just because they ride a bike… This anarchy has to stop,” the Tagesspiegel newspaper wrote recently. 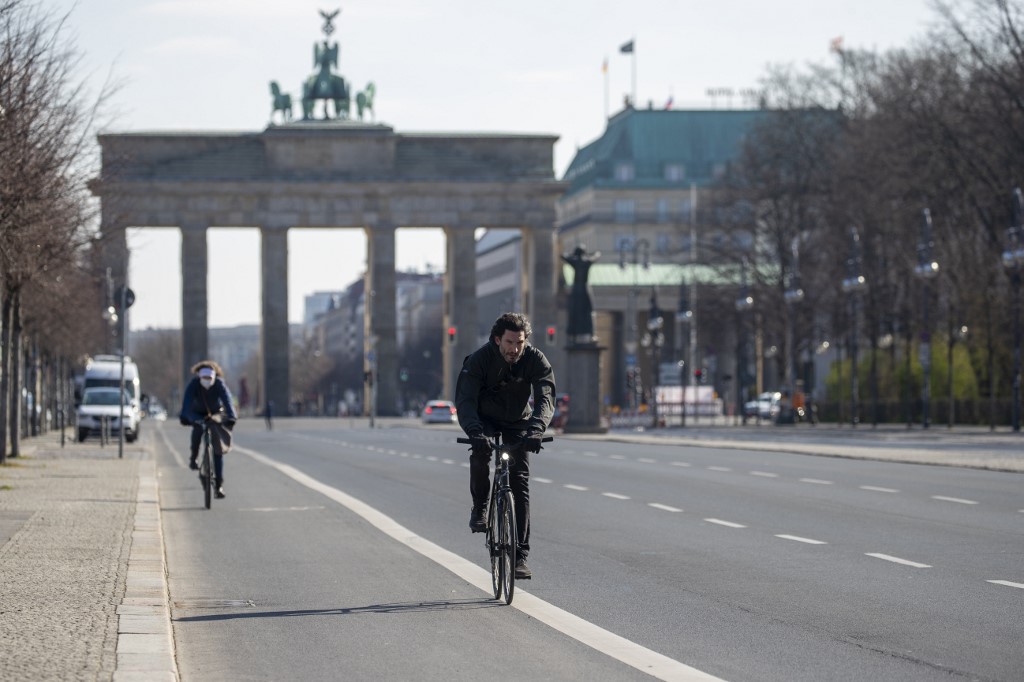 Cyclists on the street leading up to Brandenburg Gate in Berlin on a quiet day of lockdown, April 1, 2020. Odd ANDERSEN / AFP

According to Soerensen, critics are simply “trying to denigrate cyclists in order to distract attention from the delays in drafting a new transport strategy” to increase the use of public transport.

Just three percent of public space in the city is reserved for cyclists, but they make up 18 percent of traffic, says Anika Meenken of the Verkehrsclub Deutschland (VCD) transport association.

“Aggressiveness occurs when space is too tight, which naturally leads to more stress,” she said.

By way of contrast, cars make up some 33 percent of traffic in the city but take up 58 percent of the space.

But Oliver Woitzik, head of transport for the Berlin police, argues that “we can't just build roads, cycle paths and pavements everywhere.”

“What would help a lot would be for people to stop putting their own ego first, and also to know when to give up their rightful place” if there is danger involved, he said — a skill that is sometimes lacking among those on both four wheels and two.

In any case, cyclists who break the rules are more likely to be fined in future as Berlin is expanding its use of officers on bikes around the city, he told AFP.

Their number, currently around 40, is expected to “climb to 100 in the spring” and then continue to grow over the next few years.