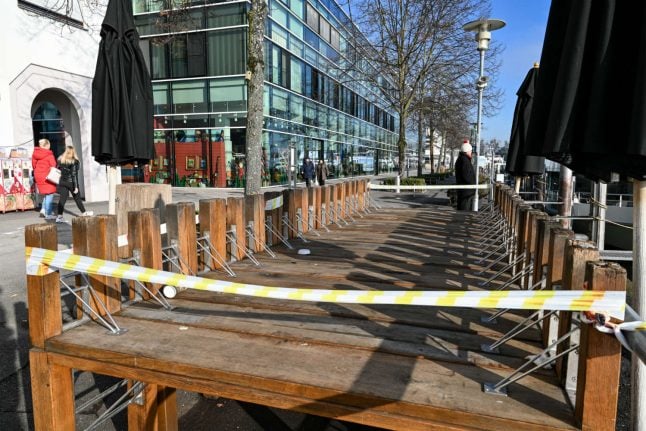 Tables sealed up in the Friedrichshafen amid the current lockdown. Photo: DPA

A total of 1,129 deaths were reported by the Robert Koch Institute (RKI) disease control centre, breaking the previous record of 962 logged last Wednesday.

“The infection and death figures show that we are still very far from normality,” Health Minister Jens Spahn told reporters in Berlin.

“I don't see how, in this situation, we can return to how things were before the lockdown,” he added.

An apparent drop in new infections and deaths in recent days was a result of local authorities not sending in their data over the Christmas period, the RKI said.

Germany is under a partial lockdown until January 10th, with most shops closed along with schools, restaurants, cultural and leisure facilities.

New Year's Eve festivities will be muted, with a ban on the sale of fireworks and tight restrictions on the number of people who can gather in public.

“It will probably be the quietest New Year's Eve that Germany can remember,” Spahn said.

Spahn on Tuesday told German broadcaster ARD that the country was “nowhere near where we need to be” and “there will undoubtedly be measures” after January 10th.

Chancellor Angela Merkel and leaders of Germany's 16 federal states will meet on January 5th to decide on future measures.

Armin Laschet, the leader of Germany's most populous state of North Rhine-Westphalia, told the DPA news agency that “no one can seriously raise this hope” of restrictions ending soon.

Berlin mayor Michael Müller also told the ZDF broadcaster he believes “we will have to continue to live with restrictions” for some time.

The eastern regions of Saxony and Thuringia remain hotspots in the country, with 330 and 255 infections per 100,000 inhabitants respectively. 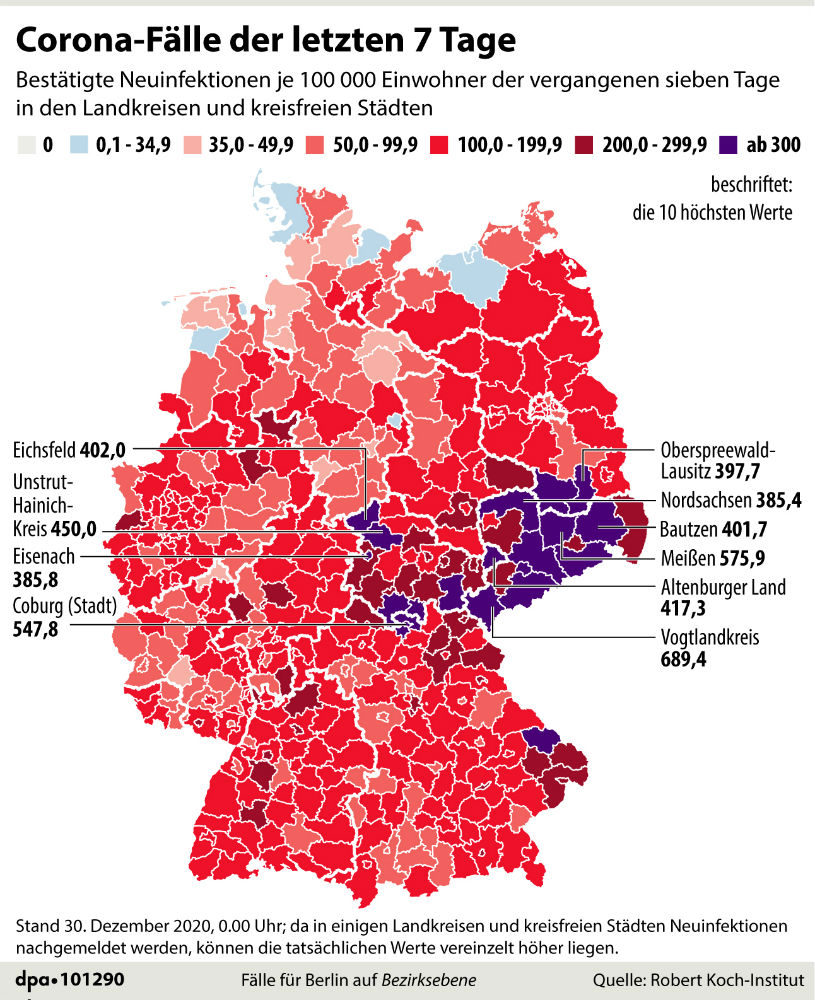 This graph shows how many people out of each 100,000 residents were infected with the coronavirus in the last seven days. Credit: DPA

More than 32,000 people have now died from the virus in Germany, which appeared to fare relatively well in the spring but has been hit hard by a second wave.

The country began its vaccination drive on Saturday, with a 101-year-old
woman in a care home becoming the first person to receive the Pfizer-BioNTech
jab.

Around 78,000 people have so far received a first dose of the vaccine, data
released Wednesday said.

But some German regions have reported delays in receiving and administering
doses.

Berlin's health minister Dilek Kalayci said Wednesday that the city-state
would be suspending its campaign until January 11th after a planned delivery of
almost 30,000 doses was cancelled.

Around 42,000 people have so far received a first dose of the vaccine, data released Tuesday said.

READ ALSO: 'A question of life and death': Can Germany speed up the Covid-19 vaccination roll-out?

Britain on Wednesday approved a second coronavirus vaccine developed by Oxford University and AstraZeneca, which is cheaper and easier to transport than the Pfizer-BioNTech jab.

However, the European Medicines Agency is unlikely to approve it in January, the regulator's deputy executive director Noel Walthion told Belgian newspaper Het Nieuwsblad on Tuesday.