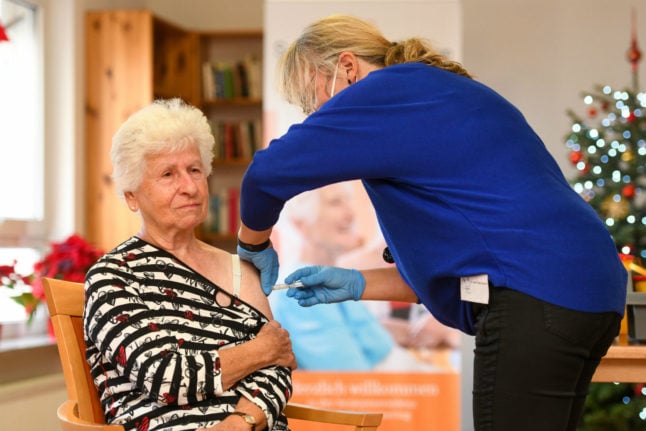 It was an historic weekend as Germany, and other EU countries, began vaccinating the most vulnerable and at risk members of society against coronavirus.

And, as we reported, 101-year-old Edith Kwoizalla became the first person in the country to receive the injection on Sunday.  Kwoizalla was one of around 40 residents and 10 staff in a care home in the eastern state of Saxony-Anhalt to receive the first jab of the Pfizer-BioNTech vaccine.

However, it will still take time before large parts of the population have their turn. The timetable is too long for some, including Free Democrats (FDP) leader Christian Lindner.

There are expected to be around 10 million doses available to Germany by the end of March, being administered in 400 vaccination centres across the country.

The vaccination is first offered to the very elderly (over 80s) in care homes and frontline workers, then it moves on to other older people, starting with the over 70s. The jab will then be offered to risk groups (those with pre-existing health conditions). The general public should start to be offered the vaccination by mid-2021.

READ MORE: How Germany will roll out Covid-19 vaccinations after Christmas

Lindner called for a faster pace of the vaccine production. “It's a crisis situation, we need crisis production,” said the FDP leader in a Bild programme on Sunday evening.

He added that Germany must do everything possible – legally, economically, politically and from a technology perspective – to ensure that vaccinations can be produced more quickly.

Specifically, Lindner suggested thinking about whether a scarce vaccine like BioNTech's could be produced under licence by other manufacturers.

He said: “The government should check with the pharmaceutical industry as a whole: where is there still capacity that can be used to produce a vaccine?”

Left party health politician Achim Kessler also backed this move. He told Der Spiegel that under law the Health Minister “can force companies to grant a licence to other companies for post-production”.

He added that the government must do this quickly. “If the federal government does not exhaust all legal possibilities now, it will endanger countless lives,” he said.

'We are running out of time'

Social Democrat (SPD) health politician Karl Lauterbach also issued a warning. “Vaccination is off to a good start. But the problem is that we can only vaccinate five million people with the available vaccine by the end of March,” he told the Redaktionsnetzwerk Deutschland (RND). “However, we are running out of time. The virus has already formed mutations.”

Critics had accused the EU and Germany of ordering too few vaccine doses, which is why other countries around the world are making faster progress with vaccinations. Lindner said that the German government had adjusted its order “very late” and only ordered 30 million additional doses shortly before Christmas, while others had already completed their orders.

However, pharmaceutical bosses rejected the idea that vaccine production is starting too slowly.

“We are seeing the first Corona vaccinations in Germany six days after approval, and we will have significantly more vaccinations in January because more and more of the quantities ordered by the government are being delivered,” the president of the Association of Research-Based Pharmaceutical Companies (vfa), Han Steutel, told the Augsburger Allgemeine.

He pointed out that production capacity for the Covid-19 vaccine was being ramped up everywhere in Germany. “And any other manufacturer that gets approval will also be quick to market with pre-produced batches,” he said.

In Germany, mobile teams were deployed on Sunday to first vaccinate people over 80 in nursing homes as well as care workers and hospital staff at particular risk.

Germany has around 83 million people.