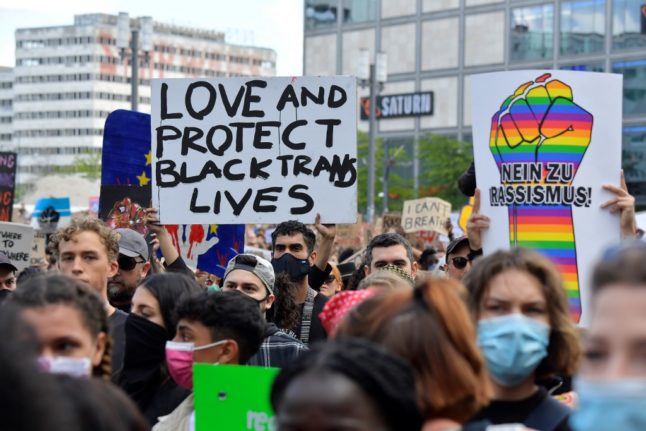 “I was like: Oh fuck! It’s the solution! I can connect it. I don’t have to be or queer or migrant. I can be both,” says Cristina.

Its name is a combination of the umbrella terms ‘queer’ and ‘diaspora’, an attempt to express the internal diversity of two discriminated against minorities: the LGBTQ+ community, and people who don’t live where their families came from, whether refugees, migrants or descendants of migrants to Germany who are not considered white or Germans.

The group meets every Monday at queer community centre Rat&Tat to drink coffee and talk. Later they put on some music and dance. “It is more casual. In activist spaces it often is kind of boring. I like the informality of this group,” Cristina says.

“I think this is one of the important things of Queeraspora, because we do have a position of not becoming academic – in the sense of this is not paper and talk. This is action and community and enjoying each other's company. You like to come here,” says Cristina.

Of course, not everything goes smoothly. “When I arrived at the group, there was only one other woman,” Cristina remembers. Though it did not bother her, she can imagine that this could have been a problem for people who do not thrive in this kind of atmosphere. Now besides Turkish, Kurdish and Arab gay men, there are women and non-binary people from Taiwan, India, Bosnia and South American countries.

With becoming more diverse another challenge arose: the language barrier. The group's social media accounts are full of posts with the same text translated into multiple versions. In their meetings they now mostly speak English. People who are not so fluent in it get a partner who simultaneously translates for them. They do the same when they meet with German groups and translate for those whose German is not perfect. This means that the members have to put a lot of time and energy into something that takes place in leisure time.

The diversity within the group can also create friction. For the organisers, this is part of the group’s family-like atmosphere and helps it become better and more inclusive. If there is a problem, they talk it out. Their mutual trust helps them when they work with white queer groups and non-queer BIPoC groups: “Yes, we work with triggers. But we also empower each other and hold each other's backs because we are a family,” says member Kyan Chen.

Around 20 people form the group's nucleus – many join the meetings irregularly. Besides empowerment, they do political and educational work, and classic activism. They have made themselves well known in leftist youth spaces and are represented on the queer political advisory board of the city state Bremen. “Our work is multilayered. We have a political aspect, a social one and a cultural one,” says Kyan. “We not only critique our white brothers and sisters, but also anti-queer BIPoC communities.”

Their activism includes holding speeches and workshops, but can also consist in seemingly little things like curating Spotify playlists for demonstrations and adding queer BIPoC artists to it. In addition, Queeraspora organizes ambitious projects like the event ‘Queer refugees get loud!’, a weekend with an education camp and a party. “It’s about combining music, dance and food with discussions,” Kyan says. While Queeraspora’s public events are open to everyone, the group reserves other activities for LGBTQ+ people of colour, who experience multiple forms of discrimination, sometimes even within the LGBTQ+ community.

“We have a lot of problems at Christopher Street Day [Pride Parades]”, says Kyan, who reports that in the past LGBTQ+ people of colour were rarely invited to speak at the event in Bremen. Some members of Queeraspora have been attacked verbally and physically at the parades and afterparties, Kyan said, while racial discrimination is a notorious problem on LGBTQ+ dating apps like Grindr.

Queeraspora was founded as an alternative to white-led LGBTQ+ support groups. According to Kadir Özdemir, a historian and sociologist who works in Hanover as project manager at the Network Office for LGBTI Refugees in Lower Saxony (Niedersächsiche Vernetzungsstelle für Belange der LSBTI-Flüchtlinge), there is a lack of diversity in the leadership of queer groups in Germany.

“Activists become a problem for queer centres as soon as they start working self-organized and with their own label,” he says, not least because they become competitors for funding. In general, it is difficult for groups like Queeraspora to get money from the state’s official funds for LGBTQ+ projects, he continues. According to Özdemir, applications have been rejected on the grounds that migrant groups can only get funding for integration projects or projects that fight homophobia in migrant communities, revealing a lack of understanding about diversity and intersectionality.

“I started this work thinking I would mostly fight queerphobia. I didn‘t expect that much racism,“ says Ali Naki Tutar. He founded Queeraspora in October 2016. Working at Rat&Tat, he saw the necessity of creating a space for people who have a migration background. Initially Queeraspora resembled a refugee and migrant self-help café.

Ali sees the mere existence of Queeraspora as a success. “We try to be one of many ways of pioneering for queer BIPoC,” he says. “To create awareness it is not enough to explain everything analytically and talk about structures and intersectionality. The emotional part plays a big role.”

This aspect helped Charlotte Shababo, a Kurdish genderqueer woman, become the person she is today. “I am not academic, so I did not know anything about the structures behind discrimination and that I am part of all this',” she says. “Before, I thought there was only heterosexual and homosexual. I was actually startled learning that bisexuality exists.”

As a child in Aleppo in Syria she felt driven towards femininity – all her childhood heroes were women, she wore make-up and dresses. The feelings she had towards other boys for her were just like the love one has for friends and family. “Entering puberty I learned that female things, or things that are female for our society, are wrong. I started to suppress it. After that I didn’t know who I was. I didn’t know whether I’m male or female or none of this.”

Not having access to information ultimately forced her to suppress her true self.

In Germany she went to Queeraspora because she was lovesick and had nobody to talk to. By exchanging feelings and experiences at Queeraspora, she says, she learned to understand the reasons for her gender crisis and gained knowledge without feeling exhausted by it. Since May she lives as Charlotte with the pronouns she/her and makes speeches in public – something nobody could foresee less than a year ago.

”Queeraspora is the place where I can be how I want to be without shame. I can let Charlotte dance. I gained knowledge, I became an activist and learned how to defend myself.”

Stephanie Alvarez is a culture and society journalist based in Germany, passionate about writing about the things in between.