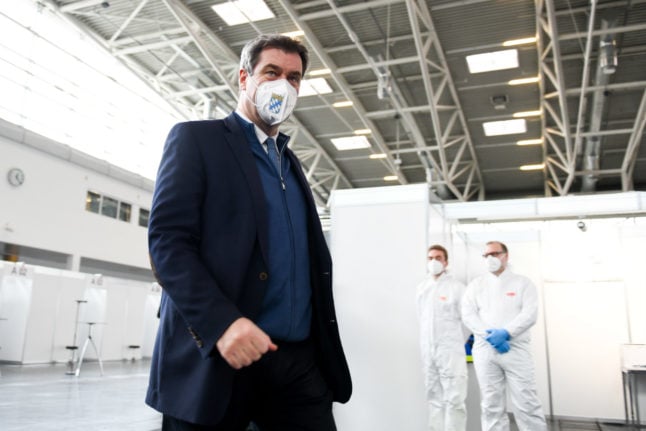 All travellers coming into the German state of Bavaria from foreign coronavirus risk regions will be subject to compulsory coronavirus testing from Wednesday, December 23rd.

A test result must be submitted to the responsible health office no later than 72 hours after entry from an area classed by Germany as a coronavirus risk zone (see below), the Bavarian cabinet decided in Munich on Tuesday.

Holidaymakers and other arrivals can show coronavirus tests completed abroad. However, the test must not be older than 48 hours.

“Holidays must not become a risk,” said State Premier Markus Söder, who is in isolation due to coming into contact with someone who has coronavirus.

“Safety comes first. To this end, Bavaria is introducing compulsory testing for people returning from travel.”

“It is best not to travel to risk areas at all. That way, everyone remains better protected,” he stressed.

Checks being set up at borders

The federal government and states previously decided that people in Germany must complete a mandatory 10-day quarantine after arriving from a risk zone. It can be ended with a negative Covid-19 test taken five days into the quarantine at the earliest.

In practice, the new regulation means that anyone entering Bavaria from a foreign risk area must now either present a negative test upon entry or go for a test immediately. They then have to quarantine before doing another test after five days if they wish to leave quarantine earlier.

Test centres at the airports or city centres are available for this purpose, Söder said. Domestic travellers in Germany do not fall under the regulation, even if the area is classed as a hotspot.

READ ALSO: What you need to know if you're travelling to Germany from abroad at Christmas

In order to enforce the testing rule and “point out the responsibility of each individual”, there will also be checks on travellers, according to the State Chancellery.

New signs on motorways are to remind people of the rules.

Existing exemption rules – for commuters for example – remain in force, according to the State. However, commuters still have to be tested twice a week for coronavirus.

On the European mainland, there are currently only regions in France (Brittany), Greece, Estonia, Finland, Norway and Austria (two municipalities on the German border) that are not classified as risk areas by Germany.

In addition, there are regions in Ireland as well as the Portuguese island of Madeira, the French island of Corsica, a large part of the Greek islands, the British Isle of Man and the Channel Island of Guernsey as well as the Danish islands of Greenland and the Faroe Islands.

Classification as a risk area occurs when a country or region exceeds the threshold of 50 new infections per 100,000 inhabitants in the past seven days. The whole of Germany and most other countries worldwide fall into this category.