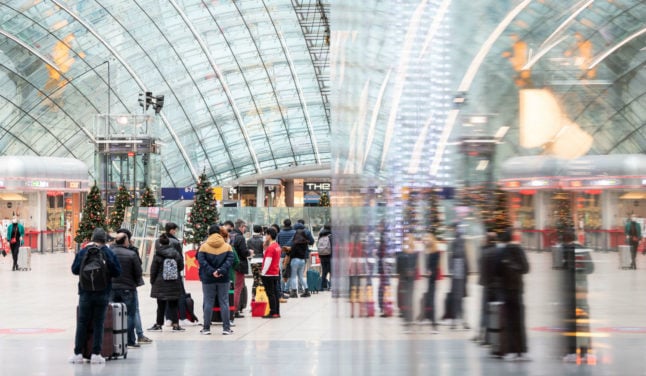 Passengers at Frankfurt Airport at the weekend. Photo: DPA

What is going on exactly?

After British Health Secretary Matt Hancock said a new coronavirus strain was “out of control” in parts of the UK, European countries struggling to deal with their own virus spread reacted with alarm and began suspending travel to Britain.

German authorities issued an emergency decree to ban travel from the UK to Germany from midnight on Sunday December 20th (Berlin time).

The ban was initially to last until at least December 31st 2020. But German authorities said on Tuesday December 22nd it was to be extended until January 6th. It also includes travel from South Africa.

People with proof of residence in Germany can, however, enter the country from the UK from January 1st. It was introduced due to concerns over the mutation of coronavirus in the UK, and South Africa.

Who does it affect?

Everyone who wants to, or planned to, travel from the UK or South Africa to Germany.  All flights and other travel links are now cancelled. Anyone who planned to travel to Germany by sea or rail will also be affected by similar transport bans imposed by other countries like France, Belgium and the Netherlands.

As of midnight tonight (Berlin time), all flights from the UK to Germany are prohibited due to the coronavirus mutation. Click below for more information. https://t.co/IjTBugPww9

READ ALSO: Travel chaos in Europe – which countries have imposed bans on flights from UK?

Are there any exceptions?

OK so what does the decree actually say about why this is happening?

The transport ban covers passenger traffic by train, bus, ship and flights directly from these countries,” the Health Ministry said in a statement.

The temporary ban was originally put in place “in order to protect the population of Germany”, the ruling by the Federal Ministry of Transport and Digital Infrastructure said.

It is needed to “limit the introduction and rapid spread” of new virus strains.

“The global epidemiological situation with regard to the spread of infections with the SARS-CoV-2 coronavirus continues to develop very dynamically,” said the general decree published late Sunday.

“New viral variants (mutations) have been identified in the United Kingdom of Great Britain and Northern Ireland. Both variants have not yet been detected in the Federal Republic of Germany.

The virus variant in the UK is, according to the British government, up to 70 percent more transmissible and has a 0.4 point higher reproduction rate (R), compared to the previously known variant of SARS-CoV-2, German authorities say.

They say this new virus variant is “spreading rapidly” in the UK.

“It is already the dominant SARS-CoV-2 variant in London and in other regions in the east and south-east of the UK. In parallel, a significant increase in the number of cases is being reported in these regions.

“This further increases the burden on local medical facilities.”

German authorities say that they want to avoid this situation in the Bundesrepublik, where they are already grappling with a high number of infections.

What about travelling to the UK from Germany?

There is no mention of travel in the opposite direction in the decree. However, many flights have already been cancelled as airlines anticipate mass cancellations.

Keep in mind that Germany has been advising against travel to the UK for months due to the coronavirus situation in general.

German authorities are also urging people not to travel either within the country or abroad, unless it is essential.

How long will this ban last for?

Initially until January 6th. But German residents and citizens can enter from January 1st. They have to be tested for coronavirus and quarantine.

It could be lifted earlier if Germany follows EU advice to allow people to return home, but so far it has not indicated any plans to do so.

Is it causing disruption?

Yes. Britons who want to come back from the UK to Germany for Christmas are effectively stranded.

READ ALSO: 'Everyone was panicking': Brits stranded in UK fear being unable to return to Germany

There's also been chaos at the borders. Many Brits who flew in on the last flights from the UK to Germany on Sunday were held at airports and had to do a Covid-19 test.

Just landed at Berlin airport on last flight from UK. Federal police triaging between German citizens and the rest of us. Curious to see what happens next as we're held at passport control.

What can I do?

More information will likely become available in the coming days. If you would like to share your experience with us email: [email protected]

Other practical things you can do is contact the British Embassy. You could also contact your airline and ask for a refund or ask to be rebooked on a new flight when it's allowed.

Keep an eye on the latest information from authorities. We'll also publish updates as they become available.

What is Germany saying about the new strain?

Top virologist Christian Drosten said he believed the new strain had already spilled over into the country.

“I think it's already in Germany,” Drosten told Deutschlandfunk radio on Monday morning.

“We now know, it is already in Italy, in Holland, in Belgium, in Denmark – even in Australia. Why shouldn't it be in Germany?”

At the same time, the virologist warned against people becoming too alarmed.

Is there anything else to worry about?

Yes, January 1st. This is the date that the Brexit transition period ends and the UK is therefore outside the European Bloc.

British people who want to move to Germany under the Withdrawal Agreement also have a deadline of December 31st to be legal resident in Germany, otherwise they face the considerably more difficult and complicated rules.