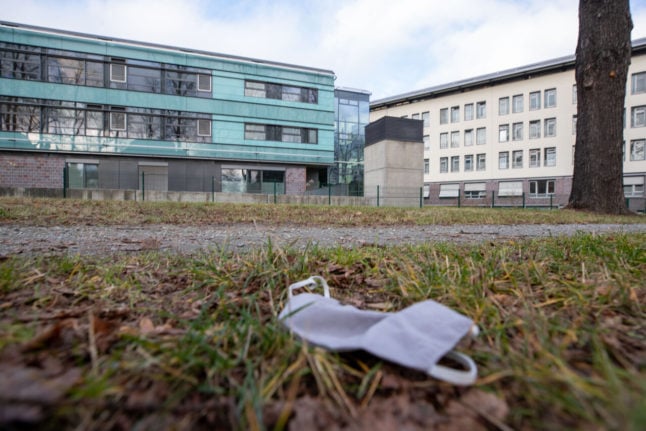 A discarded mask in the Saxonian town of Zittau. Photo: DPA

The situation in the intensive care units in many of Saxony’s hospitals is critical, with hospitals in the Saxonian Switzerland region and Dresden reporting that they have no capacity left.

One hospital in Zittau even reported that it had  started to triage patients – meaning it was having to choose who was given access to ventilators, although that report was subsequently denied.

The state’s leader Michael Kretschmer has announced a hard lockdown starting in early January that will include closures of Kindergartens and only allow people to leave their homes with “a good reason.”

The map in this tweet shows the proportion of Covid-19 patients across Germany in intensive care, with Saxony the worst affected area.

The eastern state has been the hardest hit region of Germany this time around, with cases there now at over 400 per 100,000 inhabitants over the past seven days.

Just like much of eastern Germany, Saxony also saw low cases in the Spring but the infection rate went up during the lockdown light even as it stagnated in much of western Germany.

What are the reasons for this spike? Well, with there being no data on where people have contracted the virus in the majority of cases, it is very hard to know what the reasons are, but here are some theories.

One reason that Saxony’s hospitals are currently under so much stress is that the state has the oldest population in Germany. Elderly people are more likely to infect one another than they are likely to be infected by younger people.

“This is exactly what we’ve been seeing,” Markus Scholz, an epidemiologist at Leipzig University told broadcaster MDR recently. “Saxony has significantly higher incidences than the national average, especially in the upper age range.”

Older people are also more likely to be impacted by Covid-19 than younger people.

Borders to Czech Republic and Poland

Another possible reason for the high case rate in the state is the fact that it is a border state. Saxonians are allowed to travel into the Czech Republic for 24 hours without needing a test when they return.

The Czech Republic saw a massive rise in cases in the early autumn, after it dropped most of its restrictions in the summer. Cases in the central European country dropped considerably in November but have started increasing again in recent weeks

Poland also saw a surge in the number of cases and deaths in the autumn after barely being affected by the virus during the initial outbreak. Cases there have been dropping in recent weeks.

One curious aspect of the outbreaks in Saxony is that they have mainly occurred in smaller towns. The state’s two big cities – Dresden and Leipzig – have not been as badly affected so far as rural areas even though people live closer together there than in the countryside.

Some epidemiologists have speculated that people in the countryside are being “careless” by meeting friends and family in private gatherings at locations remote from where state authorities have any control. This chart from the Robert Koch Institute's most recent report shows cases surging in Saxony to numbers far above the rest of the country.

A thesis put forward by some academics as well as the news outlet Spiegel is that the rate of infection in Saxony is linked to the strength of the neo-Nazi scene in rural regions of the state.

Matthias Quent, head of the Institute for Democracy and Civil Society in Jena has said that there is a “highly significant” correlation between the tendency of a district to vote far-right and the spread of the virus in that district.

Spiegel reports that this is not just the case in Saxony, but also has happened in the Bavarian district of Regen, where the AfD are particularly popular.

“We were surprised by the strength of the effect, we didn't expect such a clear result,” said Quent of his research into the link.

READ ALSO: Why are coronavirus rates so high in German areas with far-right leanings?

Political opponents have also accused the AfD of playing down the danger of the virus and thus encouraging poor behaviour that helps the virus spread.

“The AfD's constant denial about the virus has led to citizens becoming careless. I would even go so far as to say that the AfD has lives on its conscience,” claimed CDU politician Mario Voigt.

The weakness of this theory is that there were very few cases of the virus in the east of Germany – where the AfD is very strong – during the first wave.

“It is difficult to explain why this correlation only emerges so strongly in the second wave,” reports the Berlin newspaper Tagesspiegel.

“It is interesting to note that many counties that now have high case numbers recorded rather few cases in the first wave. So it could be that the virus spread there later, or that the acceptance of the measures fell later.”

Another thesis on why cases have surged in Saxony is that the CDU-led state government reacted to the rise in case numbers too late.

Critics of the state government say they reacted slowly, even as case numbers increased rapidly during November.

State leader Kretschmer’s government first discussed a proposal to close off highly infected areas by using the police to block people from leaving in mid-November but eventually decided against such a draconian measure.