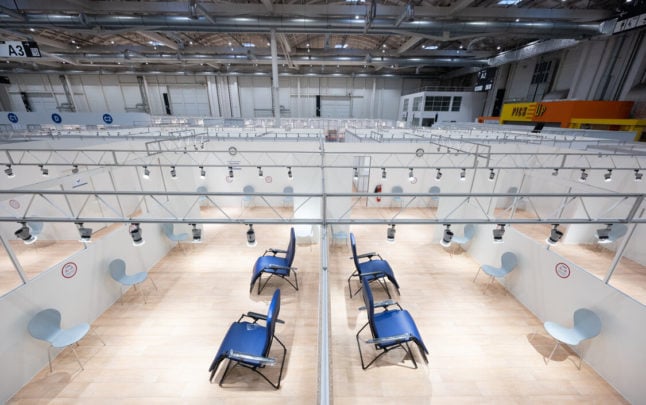 Only the green light from the European Union is needed for Germany's largest single vaccination site to spring into action, the brand-new equipment sitting ready in the vast congress centre of the northern port city.

The European Medicines Agency (EMA) is expected to rule Monday, the final step before Brussels can give the go-ahead, and Germany hopes to start vaccinating on December 27.

“We're ready. The procedures have been tested… the only thing we need now is the vaccine,” says Melanie Leonhard, the city's senator for health and social affairs.

Germany's second-largest city with two million inhabitants, Hamburg has opted for a large-scale solution to get the vaccine out as fast as possible.

Spread over 11,000 square metres (118,000 square feet), the spaces in the congress centre will be able to handle 7,000 daily inoculations, with a large staff of doctors and care personnel supervised by six senior physicians.

Vaccination will be voluntary in Hamburg and at the more than 400 other sites spread across the country of 80 million.

Those opting for the jab will need about an hour to get past the registration desk and into one of the injection cubicles, with a rest stop afterwards where they will be watched for side effects or allergic reactions.

The city has also laid on translators and interpreters to surmount any language barriers, while there will be a fast-track queue for less-mobile people.

To cut down on risks of the virus spreading at the vaccination centre itself, visitors will have their temperature taken before entering and mask-wearing and distancing will be required once inside.

“We want to create trust among the public… let them know that it's serious and really professional,” says Walter Plassmann, the director of Hamburg's doctors' federation, who manages the centre.

Health senator Leonhard points out that every cubicle “looks like an examination room” at an everyday medical practice.

As elsewhere around Europe and worldwide, suspicions and unfounded conspiracy theories that have sprouted online about the vaccines in Germany.

But Dirk Heinrich, one of the 1,400 doctors who have volunteered to vaccinate their fellow Hamburgers, has seen first-hand what the virus can do.

“I've already seen people with Covid-19 in my practice, and unfortunately some of them have died,” the ear, nose and throat doctor said, wearing a white hoodie printed with the slogan “Hamburg is vaccinating”.

The virus “is a real disaster, and the vaccine is the only chance to put an and to it,” Heinrich adds.

Just like other places around the world, the extreme low temperatures needed to preserve the BioNTech-Pfizer vaccine — around -70 Celsius — are proving a headache for Hamburg authorities.

“There are very, very tricky conditions for handling the vaccine,” Plassmann acknowledges, adding that “we haven't yet been able to test” every step.

Germany is also expecting a slow start to its vaccination campaign, with just 400,000 doses initially slated for delivery — likely meaning only a few thousand will reach Hamburg.

Only people in higher-risk categories will receive their two injections in the first weeks.

And those aged over 80 won't need to visit the vaccination centre, with mobile teams fanning out across Hamburg to inject them at home or in care homes.