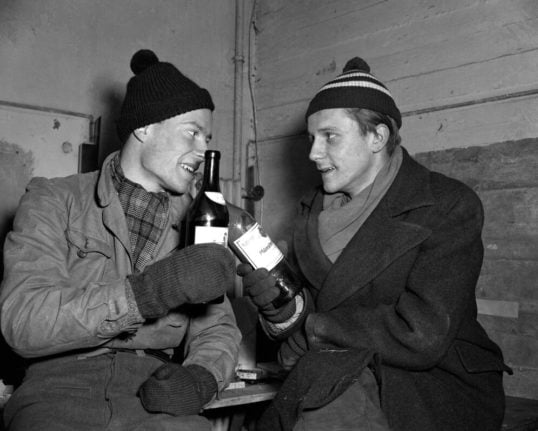 Georg von Hatzfeld and René Leudesdorff on Helgoland. Photo: DPA
On December 20th, 1950, the fishing boat Paula set sail for Helgoland in stormy weather. On board were two students who were on a mission to bring life back to the island.
Georg von Hatzfeld and René Leudesdorff wanted to make a statement via a spectacular, peaceful protest. When they arrived at the island they hoisted a European, a German and a Helgoland flag on an old pipeline.
Two journalists who travelled with them returned to the mainland to publish articles on the action while the students remained on the island.
The only building still standing was the old flak tower, says historian Martin Krieger of Kiel University. That's where the young men set up shop. “That must have been pretty windy, cold and uncomfortable,” he says.
The devastated island had been uninhabited since 1945 and the British were using it as a training ground for bombing.
During World War II, the Nazis wanted to build a huge naval port as a naval base with the “lobster claw” project through flushing and concrete structures, which would accommodate a large part of the Reich's war fleet in an emergency.
Bombing raids during the war made the island uninhabitable. On April 18, 1947, the British tried to blow up all military installations with 6,700 tons of ammunition. This “big bang” created a huge crater at the southern tip of the island.
Photos of the students' action attracted a lot of attention and brought momentum to the controversial Helgoland issue. Eventually, the British agreed to allow reconstruction of buildings on the island, which is situated some 70 kilometres from the mainland in the North Sea.
For the Helgolanders, who'd been living in exile on the mainland since the war's end, the action drew attention to their cause. Many first learned about it in the newspaper.
“They were of course happy that attention had been drawn to Helgoland again,” remembers Olaf Goemann, now 80, whose family once had to leave the island, took shelter on Sylt and could not return until 1958.
The two “squatters” Leudesdorff (1928-2012) and Hatzfeld (1929-2000) got to know each other at a discussion group in the Heidelberg student union about the rearmament of Germany.
“During a break, Hatzfeld told me he wanted to talk outside,” Leudesdorff said before his death in 2012. Quickly, he says, they hatched a plan to go to Helgoland. “We went to a pub, bought a Coke for 15 pfennigs and made a plan.”
“On Helgoland, we wanted to draw attention to the contradiction that, on the one hand, Germany was on the side of the Western alliance against the East,” Leudesdorff explained at the time. “On the other hand, German territory was still being bombed in peace five years after an armistice.”
At the same time, he says, they wanted to demonstrate for a peaceful Europe. “It was a political and at the same time a symbolic act.”
“After that first one, there were repeated crossings,” explains historian Jan Rüger. On December 27th, he says, a larger group from Helgoland joined the students, followed two days later by historian and journalist Hubertus Prinz zu Löwenstein.
“He knew how to turn this symbolic occupation of the students into a larger international event,” says the professor at Birkbeck College, University of London. In early January, the students were taken off the island.
“We Liberated Heligoland” is the name of the book Leudesdorff later wrote about the events. In it, he argues that they provided the decisive impetus for return of he island to its inhabitants.
Professor Krieger, however, stresses that “one must not overestimate this whole action.” In his opinion, the students did not – as is often claimed – liberate Helgoland on their own – “even if I know that many people see it differently.”
It was just one piece of the mosaic on the path to the island's return, he said. Key German politicians and the well-connected Helgolanders were also deeply involved, he said. “In the end, the Royal Air Force then folded.”