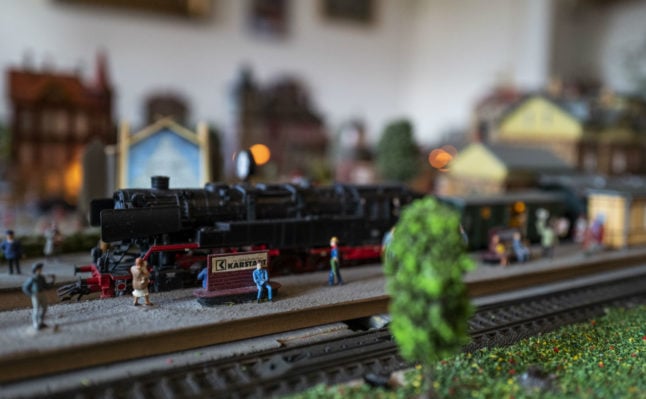 The retired carpenter has had more time on his hands in 2020 because of coronavirus restrictions — and he has dedicated it to building up an intricate small-scale village in his living room.

“This stuff takes time. And I have used that in this corona situation,” said Berndt, who would otherwise be too busy jetting off to railway conventions to spend hours a day working on his hobby.

Berndt is one of many Germans who have turned to model railways and other analogue toys this year as restrictions to curb the spread of Covid-19 leave them looking for ways to entertain themselves and their families at home.

READ ALSO: The German words and phrases you need to survive the holidays

As a result model train sales have surged.

Forecasts from the Association of German Toymakers (BVS) predict total turnover for the toy industry will be €3.7 billion in 2020, an increase of eight percent on last year.

The boost is being driven by board games and puzzles, outdoor toys and construction kits, according to the BVS.

The country's toy market grew 11 percent, or €172 million, on-year in January-October, according to the market research company npd Group.

Germany has the largest toy industry in Europe in terms of both employment and turnover, accounting for a quarter of all people employed in the EU toy industry.

Demand for toys has soared with bars, restaurants and leisure facilities closed for large parts of the year and social gatherings limited in the country, which has seen more than 1.3 million cases of the virus so far and more than 22,000 deaths.

The model railway market in particular has seen a boost after years of stagnating sales.

The pastime is especially beloved in Germany, which has the world's largest model railway system — the Miniatur Wunderland in Hamburg — and whose Interior Minister Horst Seehofer is a self-confessed fan. A close-up of one of Berndt's toy train constructions. Photo: John McDougall/AFP

Market leader Maerklin saw orders jump 50 percent on-year in November as Germany entered a second round of restrictions to combat the virus.

“We are one of the few industries that have been given a small boost by corona,” company CEO Florian Sieber told AFP.

“This is certainly due to the fact that many people are staying at home and trying to think of meaningful activities they can do at home without getting infected,” he said.

Orders also rose during Germany's first lockdown in March and April, though not as sharply since the spring is traditionally not a popular time for railway building.

Overall, Maerklin is looking at increase in orders of 10 percent compared to 2019, according to Sieber.

Maerklin has employed an extra staff member to help with an increase in enquiries to its help centre, though it is not predicting a substantial increase in earnings since restrictions have also forced up production costs.

But Sieber hopes the higher demand will continue after the pandemic.

“We suspect that those who start now will stay with the hobby for a few years or even longer. This is not a hobby that you start today and stop tomorrow,” he said.

That is certainly true for Berndt, who bought a starter kit for 30 deutschmarks with his first paycheck and has never looked back.

Today, his model with 30 trains, 300 figures and fully functioning miniature street lamps takes up the whole of his living room — but if virus rules are eventually lifted, it can be winched up to the ceiling to make space for normal life.