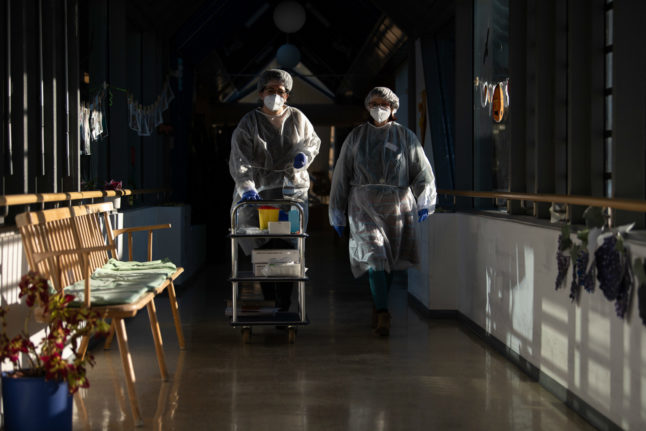 During the first coronavirus wave, Germany was largely praised for its handling of the pandemic and its lower death rate than other countries.

However, now after weeks of a partial lockdown (in place since November 2nd) the country is tightening measures as it grapples with rising cases once again – and a significant increase in the number of Covid-19 deaths.

On Wednesday, December 16th – the same day that Germany introduced new tougher lockdown measures in a bid to gain control over the situation – the Robert Koch Institute (RKI) said 952 people had died in connection with Covid-19 within 24 hours.

This is the highest number of deaths recorded in a 24-hour period. It's an increase of almost 60 percent on the previous highest death toll (598) recorded on Friday December 11th.

To put it into perspective: in purely mathematical terms, one person in Germany died from or due to complications from the virus every 1.5 minutes, reported Welt on Wednesday.

But why the sharp increase in deaths?

One reason for the higher number is linked to distorted figures. No data from the eastern state of Saxony was available on Tuesday, so it was submitted late. The RKI said 153 new deaths were logged in Saxony.

On Tuesday, the newly reported deaths climbed to 500 and therefore, even without the missing Saxony data, it was the third highest number of daily deaths since the beginning of the pandemic.

However, the main reason for the increasing number of daily deaths is most likely due to the steep increase in new infections, and more older people picking up the disease.

The total number of people who have died from or with a confirmed Covid-19 infection rose to 23,427 on Wednesday.

According to the RKI, coronavirus deaths are counted as those in which infection with the virus was the cause of death or in which it is likely, due to previous illnesses, that the death was directly related to Covid-19. What else do we know about the latest deaths and infections?

According to the RKI's latest situation report, 4,735 Covid-19 patients were being treated in intensive care, with 2,679 people on ventilation.

The institute notes numerous clusters, especially in private households and old people's and nursing homes, but also in professional contexts and in community facilities, such as kindergartens and schools. Infections are also originating from religious events.

For a large amount of the cases, the infection origin could not be determined due to a lack of contact tracing.

The RKI emphasises that it considers the risk to the health of the population in Germany as a whole to be very high.

While the seven-day incidence in younger age groups is stagnating or slightly decreasing according to the RKI report, it continues to rise in the older population.

Since older people are more frequently affected by Covid-19, the number of severe cases and deaths is also going up.

Since the beginning of September, a significant increase in the number of deaths can be seen in Germany.

The virus is particularly life-threatening for the very old: of all deaths, 19,663 (88 percent) were among people aged 70 and older, with a median age of 83. However, this age group accounts for only 13 percent of all cases.

Since the start of the pandemic in spring, 12 Covid-19 deaths in people under 20 have been reported to the RKI.

There's been a debate over whether Germany should have done more to help ease the deteriorating situation.

Now a new study has found that most Germans believe the tougher measures should have come earlier.

According to the poll by the opinion research institute Forsa on behalf of the Redaktionsnetzwerk Deutschland, 81 percent of Germans “regret that the measures that have now been adopted were not taken a few weeks ago in view of the increase in the number of infections”.

Meanwhile, 68 percent of 18 to 29-year-olds think the measures are right, and another 19 percent would have preferred even stricter regulations.

Only twelve percent of young adults reject the measures. Among all age groups, 63 percent of respondents approve of the regulations, another 22 per cent even think they should have been stricter.

The survey polled 1,002 citizens on Tuesday.