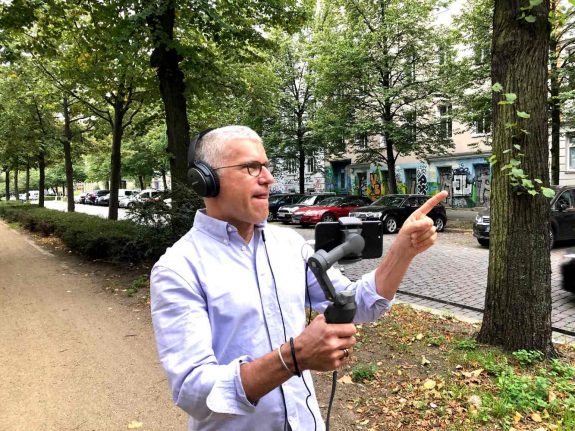 It’s a strange experience sitting down in front of a laptop to watch a tour looking at monuments just twenty minutes away from my front door, but for our guide, and the twenty others tuning in from the US and Canada, the experience seems somewhat natural.

The 20 of us gathered in front of our screens as Jeremy Minsberg  guided us past the capital’s biggest sites: including 17th of June Street, Victory Monument, Bellevue Castle, Tiergarten and more.

READ ALSO: Alone Together: How I had an unexpected night out at a German online bar

He answers our questions ranging from how the U-Bahn first came to be, to the early history of the Jewish population in Berlin.

In real life, this group could not meet, but in coronavirus times they tour through Zoom. Minsberg before the start of one of his tours. Photo courtesy of Jeremy Minsberg

Traversing the streets of Berlin as a tour guide for two decades, American-born Minsberg has seen many things, and knows the city and what makes a good tour inside-out.

“I thought I might try something completely different, and think outside the box. The technology exists to make it possible, so why not tour virtually?”

Minsberg decided to shift to virtual tours when it became clear that coronavirus was around to stay for some time.

“When it set in that this could go on for a year, or two years, I thought I would have to find a different way to show my clients and bring them to Berlin.”

At first I thought, ”This is going to be odd and no one would really want to see it. However, the response was unbelievable.”

Minsberg found that he has had as many as twenty people logging in on one tour. He never expected to be so busy during a period where tourism has come to a standstill, and has virtual tours scheduled four days a week.

His clients are primarily from Australia, New Zealand and North America, but during Germany's spring and winter lockdowns, even some Berlin locals have checked in for the virtual tour experience.

One fascinating aspect of the tour is getting a close, albeit virtual, look at the book-burning monument located in Bebelplatz.

The monument, glass plate set in paving stones, explores an underground room that holds space for 20,000 books, as a reminder of those that were burned by the Nazis who prosecuted them.

In real life, it is a monument I might have walked past if it were not for Jeremy pointing it out to the group.

The future of virtual tours in Germany

It is well known that the coronavirus pandemic has largely gutted the tourism industry, with European airlines operating at a 90.1 loss of seat capacity and most of us confined to our near surroundings for the foreseeable future.

The longer the pandemic has gone on, the more than many are suggesting that even virtual reality could be a good travel replacement for the many stuck at home.

The German National Tourist Board has been taking viewers on virtual reality trips across the country and to its Baltic and North Sea coasts in a campaign to highlight the country as a travel destination.

“There’s such a pent-up demand for travel that, as soon as there’s a vaccine I feel that this city will be busier than ever,” said Minsberg.

According to Minsberg,in-person tours are usually a better option as they allow people to get closer experience of the city.

“I want people to be able to touch and smell Berlin. It’s not the prettiest city in Europe but it’s interesting and different from anywhere else in Europe, and in person you can better show its grit, grime, its dirtiness and its nightlife.”

Whilst quarantine rules prevent tourists from coming to Berlin however, Minsberg is determined that ‘If I can’t bring my clients to Berlin, I can bring Berlin to them. ‘

Autumn is beautiful here. The leaves are changing and there is a crisp chill in the air.

I have now done dozens of virtual tours and the response has been amazing! – https://t.co/ywonVTDORm pic.twitter.com/DkHm2v3UoD

Once it becomes possible for people to travel more freely, Minsberg says he will still keep virtual tours, especially for the elderly or disabled, or those who want the feeling of going away without having time to travel.

Minsberg offers four standard tours that cover the history of Berlin West and East, and an in-depth neighbourhood tour of both Prenzlauer Berg and Schöneberg.

His tours cover monuments as well as history and stories about life in Berlin.

All tours can be booked online here. Other virtual tours of Berlin can be found on Essence of Berlin, Berlin City Tour whilst Amstel House, a hostel in central Berlin has a list of how to travel through Berlin's museums virtually.