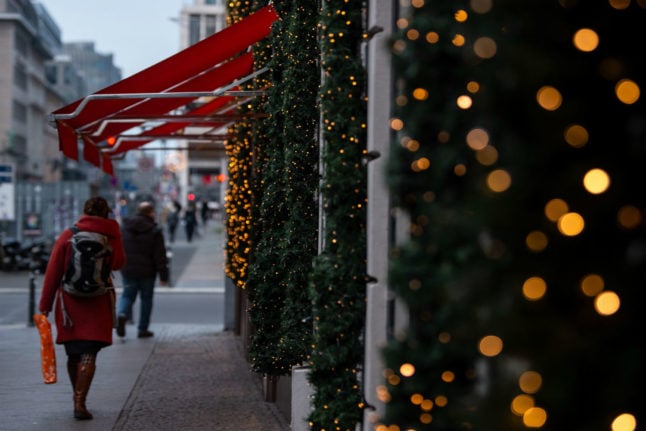 Müller of the Social Democrats (SPD) told the Berlin Senate on Thursday afternoon: “We have to close retail, even until January 10th. There is no other way.”

“The health of Berliners is more important than the shopping experience,” he added.

It is not yet clear when the measures, which are expected to be decided by the Berlin Senate next Tuesday, will take effect, said Müller. He announced, however, that the usual Sunday opening planned for the fourth Advent (or December 20th) would not take place as planned.

READ ALSO: Is Germany set for a post-Christmas full lockdown?

According to Müller, the partial lockdown which started at the beginning of November has achieved something, “but not what is needed. A point has now been reached at which decisions must be reconsidered and tightened up.”

On November 2nd, Berlin and the rest of Germany began a lockdown which saw restaurants, bars, leisures and cultural institutions largely close, but retail stores and schools remain open.

Müller also called for schools to be closed until January 10th instead of January 4th as planned.

It is not yet clear whether additional measures are to be taken. Müller, however, said that up to five people from two households would still be able to meet. For the holiday period of December 23rd to January 1st, five people from various households are allowed to meet.

Harder hit areas such as Bavaria and Saxony have introduced stricter lockdowns in the last week, completely closing shops, schools and only allowing leaving the home for “essential reasons.”

Berlin is also considered a coronavirus hotspot, with 207.1 infections in the past seven days, far exceeding the critical value of 50.

According to the Berliner Morgenpost, a majority of the Senate seemed to support the mayor's decision.

“Let's sit out the virus at home in Berlin for 14 days!” said Green faction leader Silke Gebel. She advocated keeping Christmas travel to an absolute minimum and foregoing visits to relatives: “(Holiday) travel is out in 2020 due to the virus,” Gebel said.

Carsten Schatz, chairman of the Linke (Left) parliamentary group said that figures were “much too high” despite a slight decline.

“Ahead of us are more difficult weeks,” he said.